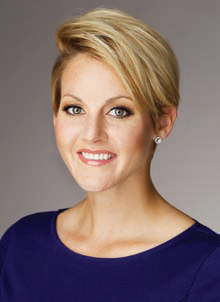 Melani Evans joined Hard Rock Hotel & Casino Biloxi at age 21 as social media specialist and media buyer, where she put her business administration and marketing degree to good use. To get a full view of the business, she quickly transitioned from the social media aspect to advertising and public relations, then to event promotions and calendar planning to round out her time with Hard Rock.

From there, Evans joined the Affinity Gaming team in March 2015. There, she has served in various marketing management positions and currently holds the title of director of corporate marketing. Being in marketing, a job that is ever changing and evolving, she loves the “chaos” that keeps her mentally engaged and always moving forward to the next goal. Says Evans, “The fun part of all of this is the path to get to the goal,” the goal itself being the ever-present driving force.

To say that Evans has had success is an understatement. During her time at Hard Rock, she was recognized as a leader of the year in 2014 and was instrumental in developing both social media and advertising campaigns that enhanced the brand and monetized both mediums. After joining the Affinity Gaming team, Evans was in charge of the rollout of centralized services for the entire organization, including integrating a new agency of record for all creative, media and direct mail functions, and expanding the reach to all properties. Her help directly led to EBITDA growth via increased marketing efficiencies.

Given her success, Evans is quick to point out that she has had tremendous help from mentors along the way. She specifically identifies Vince Lentini, who was instrumental early on in her career. He gave her early opportunities to prove herself and grow both her career and herself as an individual. He saw great potential in her and allowed her skill set to shine by creating many of the opportunities she had at Hard Rock. These helped shape and develop skills that have led to her success and the upper management position she currently holds.

Communication and hard work were two of the important driving forces that got her to where she is today. She considered revamping and relaunching many of the older policies and programs that were already in place to be a challenge.

“To see all of the effort of what you are working for make an impact on the business and see the product of what you work for actually come to life is important to me,” Evans says.

Gaming is a 24-hour business and is ever evolving, especially with a drastic change in the gaming demographic that many people have talked about over the last several years. Evans sees social media and social gaming as the way of the future to get the millennials to the gaming floor. As the times move forward, it will be important to keep up with the technology that is out there, especially for an industry that has historically been stuck in its ways and has had difficulty keeping up with new trends.