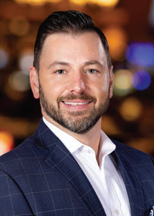 Between the time GGB chose Travis Lunn as one of the 25 People to Watch for 2019 and press time, he got a new job.

Formerly the general manager at MGM Grand, Lunn was appointed in late November as the new president and chief operating officer at MGM’s Beau Rivage in Biloxi, Mississippi.

Lunn’s entry into the casino business was a bit lofty, even if he didn’t know it at the time.

“Franz Kallao, who is now the general manager of the Mirage, was VP of hotel operations at the Golden Nugget,” he says. “He hired me to work the front desk. Steve Wynn was of course the owner, and it would not be unusual for Mr. Wynn to come behind the desk and to shake hands with everyone who was working at that time and spend some time with them. We had a great leadership team as well, so it was a wonderful first impression of the gaming business. The Golden Nugget was a great place to start your first job.”

It was an immediate love affair between Lunn and the hotel business. He soaked up everything he could.

“I stayed on the hotel side for much of my career—it was where I was born and raised and grew up in the industry,” he says. “I got a lot of experience on the hotel side at the Venetian and Palazzo in hotel ops, hotel management, overnight management, etc. I stayed in that role at the Venetian and Palazzo because the hotel is really the strength of those properties and I was able to help drive their success.”

That was soon to change when one of his connections offered him a new job.

“My first foray into the gaming side was at the Hard Rock. Paul Pusateri, who I knew from the Venetian, became COO at Hard Rock and he brought me over to become vice president of operations. That gave me my first exposure to the gaming side of the business.”

That prepared him for his next big job, as vice president of hotel operations for MGM Grand. His talents were appreciated by MGM Grand President Scott Sibella, who had big plans for Lunn.

“At MGM Grand, I’ll always be grateful to Scott,” says Lunn. “He provided me a lot of opportunities to grow. He challenged me, kept adding additional departments to my responsibility.”

At Sibella’s suggestion, Lunn became part of a corporate initiative to train senior-level executives for leadership roles, and he became one of five general managers at MGM’s luxury resorts in Las Vegas.

“It was a new role we created within the organization,” he says. “Because we have so many properties now, including the ones we recently opened or bought like Empire in New York, the Northfield, Ohio casino, Springfield, National Harbor, etc., we really had a need for people to serve in the president role. If you’re getting promoted from hotel or casino or any other department, it’s a big jump. Being a general manager is a great bridge to the president role.”

Lunn hit the ground running at Beau Rivage in his first role as president, even though it’s a new property in a new jurisdiction. During his years at MGM Grand, he learned a lot about non-gaming amenities, and plans to apply that at the Beau.

“Even though it’s still gaming, we think the legalization of sports betting is a real opportunity for us,” he says. “We think this is going to be an entry for us into other spaces. It brings a very specific guest and a demographic that we like. We have plans to build out a beautiful new sports book that will be accompanied by a restaurant.

“It gives us a chance to understand our restaurants and our retail and how that could be influenced by that guest. It’s been really strong, and we’re very pleased by the response to the sports book. We need to leverage that beyond just the sporting events.”