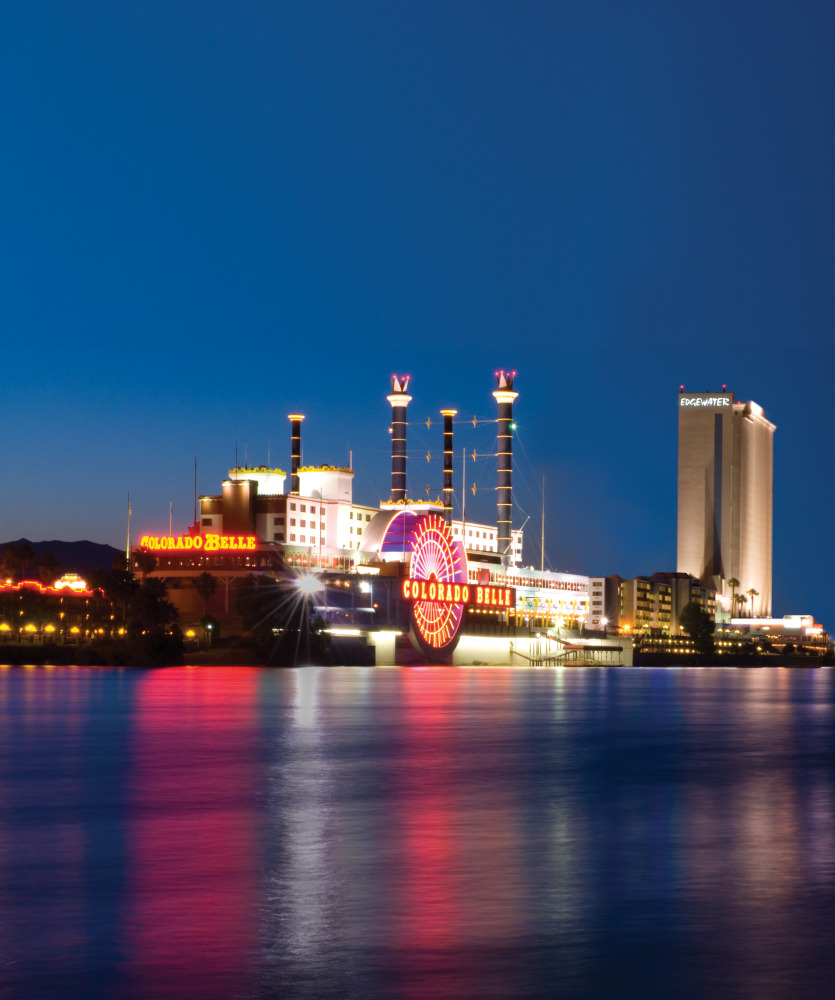 Located on the banks of the shimmering Colorado River, the city of Laughlin is a leisure-seeker’s paradise. The weather is warm, the water is nice and the casinos offer Vegas-style play at lower prices.

Named after Minnesota entrepreneur and Riverside Resort owner Don Laughlin, Laughlin is home to nine casinos and 9,000 residents, and draws more than 3 million visitors per year.

The town appeals to tourists within the six-hour drive range-mostly because Laughlin has no airport to speak of. With gas prices climbing (and no end in sight), Laughlin has seen a decline in visitation. And, according to the Nevada Gaming Control Board, Laughlin’s overall gaming win dropped 2 percent last fiscal year.

Lisa McCabe, vice president of marketing at the Aquarius Casino and Resort in Laughlin, says the recent decline is largely due to the national economic slowdown, but could also be a result of a Laughlin standstill.

“One of the key problems was that there was nothing new in Laughlin,” McCabe says. “Las Vegas is constantly reinventing itself. There’s usually a new property opening sometime. There hasn’t been any expansion or properties (in Laughlin) opening in a decade.”

The Aquarius itself, owned by American Casino & Entertainment Properties, recently poured $46 million into upgrading both the casino floor and the hotel’s rooms. McCabe said the expansive refurbishment is intended to draw more visitors to the property.

Sean Hammond, vice president of player development at the Aquarius and also president of the Laughlin Tourism Committee, says the city is planning to counteract the decline in visitation and revenue with more marketing.

“We’re hoping to re-brand the destination and not only go after new customers to the market, but also reintroduce lapsed customers,” Hammond says. “We want to show them and remind them of how nice Laughlin is.”

There are also several projects in the works to attract visitors to Laughlin. The city recently submitted a proposal to obtain a grant that would help to build and subsidize a local air carrier. Laughlin also is working on drafting birding grants to develop the eco-tourism already prevalent due to the popularity of the Colorado River.

Laughlin maintains a partnership with its neighbor across the river, Bullhead City, Arizona. Though the two are separated by a body of water that acts as the Nevada/Arizona border, the cities work together to bring tourism to the area. Fund-raising for the airport project was one example of a close working relationship between the towns, as is the fact that a majority of Laughlin’s casino employees are Bullhead City residents.

Though there may not be any rivalry with its neighbor, Laughlin faces stiff competition from other Nevada gaming markets.

“Laughlin competes with any destination,” Hammond says. “We’re a getaway destination. Las Vegas is the Mecca of all Meccas, but there are the visitors who don’t like Vegas and prefer this type of destination.”

Las Vegas remains a breed apart, though a troubled economy has led to a tourism downturn across the board, hitting Las Vegas as hard as anywhere else. McCabe says Vegas resorts are now attempting to market to the same players who would normally head to a smaller destination like Laughlin. However, there is still a clear difference between the larger Vegas market and the smaller Laughlin one.

“The people who go to Vegas because they like Vegas have no interest in going to Laughlin,” McCabe sats. “A true gamer, someone who enjoys the game of chance, will enjoy both. Laughlin offers the same opportunities as the megaresorts in Vegas as far as gaming product. We have the mega-jackpots; we have it all, just like Las Vegas does. We just don’t have the nightclubs or Paris Hilton coming out.”

Joe Magliarditi, executive vice president and chief operating officer of the Colorado Belle and Edgewater casinos in Laughlin, says the smaller town offers a more relaxing vacation for those who find the Las Vegas Strip too overwhelming.

The town is using its reputation as an alternative to the big city to its advantage; the latest marketing campaign tells visitors, “It’s like you own the place.” McCabe says this slogan is significant because it reminds customers that they won’t be lost in the crowd in Laughlin.

Magliarditi says Laughlin has to “reinvent itself” and provide people with more reasons to visit.

“The LTC has to create more repeatable events to give people reasons to go to Laughlin,” Magliarditi says. “It’s one thing to market the fact that it’s a cheaper alternative and a quaint alternative. We get the bull-riders down in Laughlin-those types of repeatable events are very good for the city. Everyone in the city does well because of that.”

Many casino executives are crafting individual strategies to beat the economic blues. Magliarditi says his properties are offering gas cards to slot and table game customers, as well as running a twice-weekly charter air service from Riverside to Bullhead City. The service offers three round-trip flights every Thursday and Saturday to deliver visitors to the area.

“I think the Laughlin market had a slight decline, but we’ve made some significant capital improvements,” Magliarditi says. “It’s become an option to someone who now can’t afford Vegas. Laughlin is a good option because there is a lower cost to do essentially the same things you can do in Vegas.”