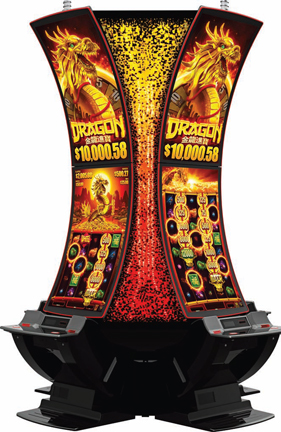 There is no major supplier in the industry that has been through more changes the past year than the company now known as Light & Wonder, Inc. A year ago, it was Scientific Games Corporation, a supplier of slot and table games, systems for casinos, and social and real-money online gaming; a full-service supplier to worldwide lotteries, including tickets, hardware and systems; and a sports betting platform supplier.

Since Scientific Games was to remain the name of the worldwide lottery business, the company’s leadership, headed by Executive Chairman Jamie Odell, decided to search for a new name, ultimately deciding on Light & Wonder, to reflect the creativity of the company’s game design teams. In April, the company officially changed its company name and stock ticker symbol.

At the end of August, the company announced that Barry Cottle, who had led the divestitures and company transition as president and chief executive officer, was departing, and Matt Wilson, who leads the land-based gaming business as executive vice president and CEO, will serve as interim CEO of the company while an executive search is conducted.

Wilson himself had been brought in to head the land-based gaming division by Odell in early 2020—one of many executives, including Executive Vice-Chair Toni Korsanos, who formerly were with Aristocrat when Odell was CEO of that company.

Reviewing the company’s changes over the past year, Wilson says it made sense to shed all but the games, systems and interactive businesses.

“We were always a company that was heavily debt-burdened; we were put together through acquisition,” Wilson says. “So, we wanted to make sure we were in a position under the new leadership team to have the agility, focus, and financial stability to make the right decisions for the company long-term.

“So we made the decision that we had to rapidly de-lever. We sold lottery, we sold sports to rapidly pursue our bold, unique new strategy and invest in our products and people. The pieces that are left in the portfolio are three very complementary businesses. There’s the land-based business, of which 85 percent of the company profits come from, and it’s primarily focused on building great slot games and enabling technologies, like our great systems business. You’ve got the social casino business, which is about taking those games and publishing them in a social casino platform, and then the third business is digital, which is obviously getting legalized at a pretty rapid rate in the U.S. market.” 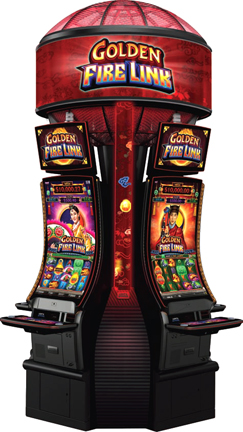 Wilson says the three businesses left after the divestiture—casino games, social casino and digital—“all of a sudden, really fit together. The vision we created as a company under Barry’s leadership is to be the industry’s leading cross-platform global game company.”

Wilson dissects that mission statement further, noting that being No. 1 “is our clear ambition; we want to be the leading games company.” He says the second part of the statement—“cross-platform”—defines the manner in which content will be rolled out. In other words, to all channels at once, and connecting and enabling that cross-channel experience for operators and players through the back-end systems.

“We want to be able to take our games and publish them across channels in a very coordinated way,” Wilson says, “so we are doing a lot of work to streamline our roadmap. So when you see a game like Golden Fire Link, we are setting ourselves up to be able to publish that game in land-based, social casino and digital all at once, getting it in front of maximum eyeballs but also leveraging the channels to test games and improve our hit rate. It’s a stark contrast from where we were last year. We are also working towards converging our land-based casino management system and our digital player account management system to provide operators with a 360 view of the player across channels, enabling them to grow player loyalty and improved experiences.”

Wilson says the renewed emphasis on content in all channels has prompted the company to beef up its game development team. In July 2021, the company brought in Rich Schneider, formerly longtime product executive for Aristocrat and IGT, as the new chief product officer. Ted Hase, the veteran game designer who headed up Aristocrat’s Studio 54 team, was brought in to head a new game design studio for Light & Wonder, called Studio X. And more recently, Victor Blanco, chief technology officer, joined the team to drive technology innovation.

“We have great talent, but we believe in building talent density across the board, so we have been adding to the roster and are laser-focused on ensuring our talent strategy fuels our company strategy,” says Wilson, “including people who know how to make great games.”

Wilson says the new talent augments an already-healthy multi-studio game development team at Light & Wonder, who keep adding to the company’s famous game franchises, from Hot Shot to Dancing Drums, Monopoly, The Wizard of Oz, and even extensions to the tables business as well with well-known player-favorite brands like Ultimate Texas Hold’em and 3 Card Poker.

Additionally, Roulette X, a top-performing game in the ETG segment, will be showcased across four different platforms including an introduction as a felt game at the show. To top it off, the tables group will also showcase a data analytics solution, Shuffle Connect, which gives operators the ability to tap into critical performance data across their utility products, and will also show a cashless gaming solution for table games named AToM.

New entries in all that proven content and technology will join several new game categories in Light & Wonder’s display at the Global Gaming Expo. And, as often is the case, it will begin with new hardware.

L&W will be showcasing its latest new cabinet, the Landmark 7000 Wheel, at the show. A variant of L&W’s successful Landmark 7000 stepper, the new cabinet features an eye-catching 19-inch bonus-game wedge wheel on top of a package that brings together some of the most important creature comforts of any high-denomination stepper format.

The mechanical wheel topper offers unique, emotive lighting purposefully designed to draw attention from all around the casino floor while optimizing the seated player’s view of the wheel as it spins, building anticipation towards the jackpots it can award.

Just above the reels is a 32-inch, 4K+ portrait monitor featuring striking graphics. It is available with a five- or 14-button deck and can support any bet and denomination configuration.

The cabinet made a smashing debut last summer with the launch of a new version of the famous Blazing 7s stepper title.

“And then we got the first numbers for the Landmark 7000 cabinet. The mechanical-reel Blazing 7s went straight to No. 1.”

The revival of that most legendary of Bally reel-spinners will be followed up at G2E with the launch of Sinatra, using the new Landmark platform to celebrate the music of the legendary crooner.

The Sinatra game celebrates the sights and sounds of Frank Sinatra with multiple bonus features, including the Sinatra Bonus, which includes videos of Sinatra singing a few of his greatest songs during game play. The top wheel acts as a bonus game, offering either a Sinatra Bonus, credits, or “Records,” a watermark players try to collect to get closer to the jackpot.

At G2E, L&W also will display a third game for the Landmark 7000, Johnny Cash-The Man in Black.

The new Landmark games will join a parade of new content for all of the company’s other form factors. Among the showcase hardware of the past year has been the Mural cabinet. Launched in April 2021, the Mural features dual stacked 55-inch 4K curved monitors—that’s 110 inches of game real estate, the most in the business—in a presentation that rises 11 feet.

This year, the Mural will host the first game from the new Studio X headed by Ted Hase—Dragon. As one might expect, the huge canvas is home to striking graphics, as a dragon flies over the reels and drops down credit awards, wild symbols and multipliers. The base game is on a five-by-five-reel array.

The game includes a unique cash-on-reels feature. Cash-on-reels symbols cascade down for several spins before disappearing at the bottom. This feature is enhanced by the free-game bonus, which plays out on an expanded reel array 10 rows high. A wheel feature can lead to one of four jackpots, including two progressives.

Also on the Mural is Ultimate Fire Link Explosion, which, upon its release, shot to No. 1 on the Eilers-Fantini performance list for wide-area progressives. At the heart of the game is the fireball symbol, drawn from previous Bally games. Four scattered fireballs trigger the Fireball Feature, the lock-and-spin sequence from the original Ultimate Fire Link game on the J43 cabinet. In the Mural version, monkey characters in a tree help players reach the bonus by throwing fireballs down to the reel array.

The four-by-five-reel array expands to eight rows for the lock-and-spin bonus. The player also can trigger a “Super Fire Link” version of the bonus with the reels expanded to 12 rows.

The game also features a wheel bonus, played out on a giant vertical wheel display that shows the edge of the wheel.

Finally, released in summer this year was a game that definitely stands out on the Mural cabinet, The Wizard of Oz: Follow the Yellow Brick Road.

The images from the classic technicolor film really pop with the 4K graphic capabilities and the stacked large screens. The reels on the four-by-five array expand to eight rows for the free-spin bonus. The game also reprises the popular “Glinda the Good Witch” mystery bonus event in which Glinda appears to award multipliers, free games and other bonuses.

L&W brings the Ultimate Fire Link mechanic to its Kascada portrait cabinet in Golden Fire Link. This includes an expanded reel array of nine rows in the lock-and-spin bonus and a free games bonus with “what-you-see-is-what-you-get” cash-on-reels symbols. There also is a “game-within-a-game” bonus feature that recalls the game Hot Shot—a reel-spin on a classic Bally stepper title.

Dragon Unleashed features a lock-and-spin bonus that includes cash-on-reels symbols on four reels and jackpots on the fifth reel.

The other new Kascada release is Tree of Wealth Prosperity, featuring a money tree collection feature and expanding reels in the free games, with gambler-friendly volatility.

Light & Wonder this year returns with a bang to the mechanical stepper space by using the new Landmark 7000 cabinet to roll out a new version of one of the most well-known mechanical reel-spinners of all time, Blazing 7s from legacy company Bally.

The game that Wilson says has shot to the top of industry stepper surveys is Blazing 7s 2X3X5X, a supercharged version of the well-known original that adds an array of multiplying wild symbols to the multiple “7” combinations that made the original game famous.

Wilson credits the new focus present at Light & Wonder for the success of the Landmark cabinet and the new Blazing 7s game.

“It shows that if you get this business focused back on the basics, we’ve got great people, great talent, great brands,” he says. “Put your energy into those key things, and success will come.”

Light & Wonder’s G2E display will certainly have a systems component, with new casino management system tools and Player Boutique, the unique gifting program that replaces the old toaster and microwave lines, allowing players to order their own reward gifts at the slot and have them delivered by Amazon to their front doors within two days.

The company also will show its Unified Wallet cashless system, which facilitates cashless play both at the slots and the table games.

But the focus for Light & Wonder will remain on the cross-channel content, and the success resulting from the company’s new focus on games.