The Covid pandemic put millions out of work. Two years after the shutdown, some people are still not rushing back to the job. 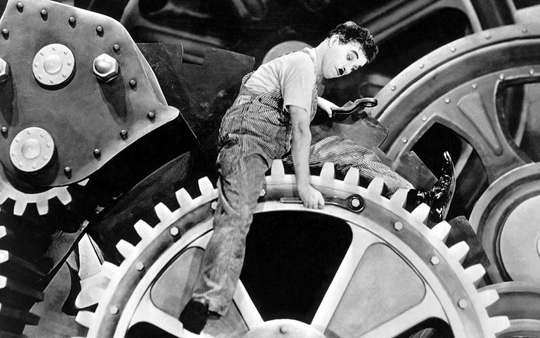 In the classic 1936 silent film Modern Times, Charlie Chaplin plays a factory worker whose sole purpose on the job is to tighten bolts on a moving conveyor belt. In an iconic scene, Chaplin is sucked into a series of giant rotating gears, literally becoming a human cog in an impersonal machine.

It’s a metaphor for the type of worker dissatisfaction behind the “Great Resignation.” The post-pandemic labor crisis has had a widespread and lingering impact on several business categories, including gaming, hospitality and retail.

Donald Hoover, of Fairleigh Dickinson University’s International School of Hospitality and Tourism Management, prefers to call it the “Great Shock.” With Covid-19 and the resulting shutdowns of business and travel around the world, people who had always felt secure in their lives and livelihoods were “shocked into rethinking their priorities in life and what they were doing,” says Hoover. “It was devastating to employers, too. They lost talent they had developed and trained for years, and in some cases, decades. Now we go from massive layoffs to trying to hire back.”

But workers aren’t rushing to return. According to Pew Research, reasons for the phenomenon include low pay (63 percent), no opportunity for advancement (63 percent) and feeling disrespected at work (57 percent). Other reasons are lack of flexibility and lack of benefits like health insurance. The crisis also presented special challenges for parents; according to the New York Times, in 2021 4.5 million women left the workforce because they lost their childcare.

Interestingly, many workers are unwilling to return due to what they perceived as poor treatment by their companies during the pandemic—a pass-fail test that earned some CEOs a big fat “F.” Last fall, though there were 5 million fewer jobs in the U.S. than before the pandemic, job openings remained at near-record highs.

“Nothing in our lifetime has been this extreme,” says Steve Heise, former human resources executive at Foxwoods Resort Casino, the Maryland Live! Casino and the Walt Disney Co. “All the HR journals are saying people got used to working from home and liked it. They liked taking care of their pets and kids and not commuting every day. What they want are flexible schedules—not something the casino industry has been open to.”

In February, the U.S. Bureau of Labor Statistics reported that the top three most-quit job categories for the month were “accommodations and food services” (6 percent of total employment), hospitality (5.6 percent) and retail (4.9 percent)—all face-to-face occupations that can’t be phoned in or fully automated.

Is there a way to bring back these front-line workers?

“The hospitality industry is a very hard industry,” says Bob Ambrose, former Atlantic City casino executive and creator of hospitality management curricula at a number of U.S. universities. “It’s a lot of pressure, it’s long days, it’s a lot of time on your feet. But you can’t run a casino, a restaurant or a hotel without these people—they’re the core, and you’ve got to find ways to bring them back.”

As lures, employers are offering perks unheard-of before the pandemic, says Ambrose: “signing bonuses, increased salaries for seasonal workers, more guaranteed base salaries for tipped employees, more flexibility in scheduling, and shorter time for the initiation of health care benefits.”

But the number of unfilled jobs proves you can’t just buy back a willing workforce. “I’m seeing it across the board: entry-level positions are high turnover just by nature, but now it extends to professionals and management as well,” says Jasmine Takeshita, director of talent acquisition for the  San Manuel Tribe, which operates the Yaamava’ Casino Resort near San Bernardino, California. “A lot of companies out there are trying to buy talent as an immediate Band-Aid.”

While competitive pay is part of any employment package, these days the keys to a fully staffed and dedicated workforce may be more about the intangibles: culture, career opportunities and appreciation.

“If a team member knows they have a purpose, that they’re receiving a great, comprehensive benefit package, that they enjoy what they do, that there’s possible progression in the future, then that’s an investment that they’re willing to make,” says Takeshita. “We’re not looking for that Band-Aid. We’re looking for long-term development for our team members.”

In an airport recently, Hoover stood with other travelers in long lines for food and other services. Employees behind the counters were “out there delivering the promise, working these lines that just never got shorter,” he recalls. “My first thought was, ‘How is that employee handling all the stress? Why is that person still in their job?’ My second thought was, ‘That employer is so lucky.’”

Now is the time for employers to show their gratitude, in word and attitude as well as in the biweekly paycheck. “You’ve got to take care of them,” says Hoover. “You have to be proactive and ask employees, ‘How can I make it better for you? I don’t want to lose you.’ You’ve got to be that honest.”

The worker deficit “isn’t a light switch, where you’re going to turn it back on and get back to normal. So the best hiring strategy right now is to retain your employees.”

That is apparently what happened at the Emerald Island Casino in Henderson, Nevada, which closed in March 2020 due to Covid-19. Of 175 employees, 140 were furloughed, leaving 35 to manage internal operations. Seventy-eight days later, when the casino reopened, all but two employees returned to work. Of the two no-shows, one had retired, and the other was needed at home to care for family.

Perhaps surprisingly, CEO Tim Brooks says money is not the No. 1 requirement for his employees. “They focus on career advancement and the opportunity to be part of a team, and the money follows. We give them an opportunity to grow in their careers… It’s the environment you create—it’s hard to explain, beyond treating people like you want to be treated.”

That’s not just corporate cheerleading—among the success stories at Emerald Island are a dishwasher who is now an assistant general manager, a security guard who became a shift manager, and waiters who have risen to become restaurant managers.

“In our business, our team is our No. 1 asset,” says Brooks. “You can never grow if you cut back on service, which we rely on our team to provide. Companies that have experienced the Great Resignation have to step back and re-examine what their core values are—re-examine their business on a regular basis, find out what their team needs, and listen to them.”

For example, while overall compensation is still very important to nearly half of younger employees, it’s not as important as opportunities to learn and advance, the quality of the relationship with their bosses and rewarding work.

Heise recalls an incident from his career in which a resort maintenance worker approached him, almost abashedly, to suggest that the owners install an outdoor terrace. That employee prefaced the conversation by saying, “I’m just a housekeeper.” Heise was quick to correct her, saying, “You’re a very important part of guest services, and your voice is very important.”

While it’s not a cure-all, to develop an engaged workforce that sticks around, it’s important to recognize them, view them as colleagues, not underlings, acknowledge their contribution, and value their input.

Much has been made of disruptions in supply chains due to the pandemic. The same is true of the talent supply, and people now may need to be wooed to enter a new relationship. Takeshita says the San Manuel Tribe relies on “recruitment marketing, being able to really tell our story, establish ourself as employer of choice, build a talent community so that we’re recognized as a great place to work, not only for active job-seekers, but passive candidates in the future.

In some cases, the recruitment team helps potential candidates dig down, identify their own strengths, and recognize how their existing skills can be transferred to careers in hospitality and gaming.

“We’re providing that coaching so they can see how their talents could work within our enterprise,” says Takeshita. “If anything, we’ve learned from the pandemic that there is no one-size-fits-all approach” to hiring, “it’s become layered.”

In addition, she says, “Yamaava’ and San Manuel choose to look at a more holistic benefit offering. So not only do we have that competitive pay, but we’ll institute non-traditional benefits like pet insurance or tuition reimbursement. Things like that show candidates and employees that we care about what they care about.”

The California tribe, while handing out welcome bonuses, did not overlook existing employees, who got thank-you bonuses for their continued loyalty. “We’re balancing it out and making sure every team member knows that they’re an important part of our enterprise,” says Takeshita. “And we try to say thank you every day.”

According to Gallup research published in March 2020, just one in three employees worldwide said they trusted the leadership of their organizations. And just 13 percent of U.S. employees strongly agreed that their company’s leaders communicated effectively. In retrospect, those employers should be astounded by the Great Resignation, a mass psychological shift that made more people more willing to say, “Take this job and shove it.”

“It’s been a wake-up call for a lot of industries,” says Ambrose. “Corporations have to rethink everything. Now is the time to create a better workplace. It will benefit the workers and in the long term, it will benefit the employers as well.”

In 2021, Professor Anthony Klotz of Texas A&M University first coined the term “Great Resignation.” Klotz recently said rank-and-file workers will continue quitting their jobs at above-average rates through 2024 or even 2025. In many ways, that’s tipped the balance of power in the workplace, and put employees in the driver’s seat. Don’t expect them to scoot over any time soon, especially now, with Covid still a threat.

“There could be another wave, like there’s been in China,” says Heise. “Then you’re back with the Plexiglas and the masks and the screenings and the apprehension”—and employees heading for the nearest exit.

The experts weigh in with tips for employers looking to hire:

Prepare to hire more boomers. In 2021, there were 36 million people 55 years of age and over in the workforce—a significant number compared to every other age group. Be aware that baby boomers will be more interested in flexible scheduling.

Keep it local. Higher gas prices have made some candidates less willing to commute long distances. “Hiring is hyperlocal now,” says Fairleigh Dickinson’s Donald Hoover. “Be on a first-name basis with the people at your local department of labor. They’re the experts.”

Get super-social, recognizing that job fairs and postings aren’t enough to create a candidate pool. Amplify your social channels, not only to advertise job openings but to get testimonials from team members about why working for your organization is so great.

Court more willing workers through innovative entry programs. One website, Unanet, recommends offering an internship-like program called a “returnship,” designed to help people return to work after an extended hiatus. Companies that offer such programs can “diversify their workforces, tap an experienced but overlooked segment of
the talent pool, and enhance the positive perception of their brands.”

Establish a leave-of-absence program. An article in Harvard Business Review suggested employers offer a “pandemic
leave of absence,” paid or unpaid, with benefits and seniority intact to retain valuable employees, especially women. According to HBR, “They’ll value your support and loyalty and be less likely to seek employment elsewhere when they are ready to return.”

Give employees more say in their work life, says San Manuel’s Jasmine Takeshita. “There’s a fine line in making sure that employees are doing their jobs and being productive, yet allowing them to have flexibility and creativity and truly develop themselves in a career. When you’re able to share ideas and be more collaborative, that’s fantastic.”