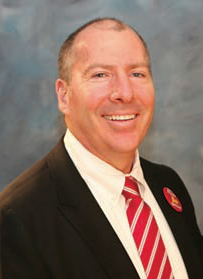 GGB: There’s somewhat of a perception that Caesars has not reinvested in its properties in Atlantic City over the last few years, because of the financial shape of the parent companies. Is that true, or not?

Kevin Ortzman: It is not true, but I do recognize that perception out there. I constantly address that. Over the last two years, we put about $200 million in the three properties. The majority of that went to Harrah’s, with the meetings facility, which was really intended to create new demand for Atlantic City, and which has been wildly successful.

And on the Boardwalk—also in the spirit of trying to create new demand—we created a new Wild Wild West, with a focus on entertainment and value. We are trying to go after what we believe is an underserved demographic, which we often refer to as the millennials, and that also has been wildly successful.

We certainly have a desire to continue to reinvest in the rooms, and we expect, once we emerge from bankruptcy, that we will be able to continue doing that. Fortunately, we just completed a 500-room project over at Harrah’s Resort, really intended to prioritize to be able to provide the overall product to benefit the meetings facility.

The Wild Wild West project has been impressive. You’ve spread out the games, there’s a big dance floor, a concert facility, and of course there’s a great bar that extends out onto the Boardwalk. How has that been working?

The intent was to create this immersive, fully integrated experience, because one of the few attributes that we understand about millennials is that they’re very social. They have a short attention span, so to be able to have a variety of stimuli, we feel that this has been very successful. We have an open-air bar right on the Boardwalk, the first of its kind. We have bull-riding, basketball and football games. We have live entertainment, beer pong, air hockey; so, a variety of different stimuli. And of course, the only $5 live table games in Atlantic City.

At Caesars, you’ve got the Gordon Ramsay Pub & Grill in the lobby. How has that been performing?

Very well. We continue to look at opportunities to create that excitement in our point of entry. It’s a bit of a challenge, because it is also where our front desk is. So, we don’t want to distract from the experience of checking in, yet create this great vibe that makes people realize they need to go there.

We just finished renovating nearly 300 rooms. What was formerly known as the Temple Tower is now the Forum Tower, which is essentially a replica of our Forum Tower in Las Vegas. So, we’re trying to create that expectation of a particular standard, when you go to any of our brands, like this particular one that’s in Caesars.

The conference center at Harrah’s really has made a difference. Tell us how that’s worked.

It obviously brings a different type of guest to Atlantic City, and lets them see what the entire city has to offer. It looks just like a Las Vegas conference center. Between the meeting space, and then all of the amenities that we have to offer, with the Pool at Harrah’s, the Red Door Spa and the restaurants, we have it all. The Pool is such a unique space to have a reception. We have so many things that professional and meeting groups want to have in a property.

At the Pool, we brought a gaming space downstairs to give it more energy. And then upstairs in the loft, we’ve really actually been looking at what they’ve done over at Bally’s, and seeing what we can do to model after that—just to create those stimuli that millennials want, and create new experiences all the time for those guests.

Caesars CEO Mark Frissora and MGM’s Jim Murren recently met with Governor Chris Christie and discussed a possible new convention facility connecting Harrah’s and the Borgata. Do you think Atlantic City would support a large meeting facility like they do in Vegas?

I don’t see any reason why not. Given the critical mass in the Northeast region, and the proximity, particularly as airfare continues to increase, we’re a more viable option for the region. We have a much larger selection, more cost-beneficial for these corporations than the major cities around us.

But there’s no real concrete plans one way or the other, other than we want explore opportunities to continue to create demand in Atlantic City.

Are you growing the non-gaming revenue in Atlantic City?

If you recall, it used to be 70-to-30 percent gaming in Las Vegas, and now it’s 70-to-30 percent hospitality. So, we hope to see that continued improvement here in Atlantic City. And we know lots of people are less patient than we are. We recognize that takes time. But Caesars is leading the way in trying to transform Atlantic City.