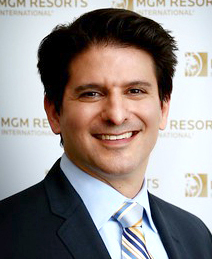 Jorge Perez has been with MGM Resorts for 25 years in a variety of positions, most recently president of the company’s regional resorts, a title he still holds in addition to being president and COO of MGM National Harbor. Perez joined National Harbor after a reorganization of corporate leadership in May 2020. He explains what it means to lead one of MGM’s leading regional properties during the pandemic and how it has fared since reopening in late June. He spoke with GGB Editor Frank Legato from his offices at National Harbor in November. For a full podcast of this interview, visit GGBMagazine.com.

GGB: Maryland casinos have rebounded from the Covid shutdown better than most jurisdictions. How have the state’s casinos in general, and MGM National Harbor in particular, managed to perform in these conditions?

Perez: Obviously, it’s a difficult operating environment for any leisure and travel company. But health and safety is paramount no matter what. And I think as an industry, we’re doing a really good job. Outside of gaming, the entertainment options are limited—concerts, stadium-sized sports events, even your local restaurants or bars, and the restrictions that they have. The entertainment dollar is being a little bit more limited to where it can go. So, I think the casinos generally—and we’re seeing that not only in Maryland, but all the other jurisdictions in which MGM operates—(are garnering) a larger share of the entertainment dollar.

The other thing is that travel—air travel, specifically—is down considerably. So people are staying closer to home, versus making that big trip, either domestically or internationally…. So I think that’s the biggest driver.

Did you also see a lot of pent-up demand when you opened?

Yes, we did, absolutely. In some markets, it was a slower ramp, in some markets it was a big pop, and then it slowly came down and then sort of stabilized. So, it’s a variation. But yes, we were quite surprised by the interest and demand shortly after opening.

Headline entertainment has always been a strong point at MGM National Harbor. Obviously, you can’t do shows like Cher now, but what’s the plan to phase entertainment back into your operations?

We’re an entertainment company. So the fact that there is no headline entertainment is painful. We can’t wait to have it back. But we’ve got to be respectful of the government restrictions and executive orders that are in place. As far as mass gatherings, or gatherings of groups, we just have to wait until conditions improve. And right now, trends are not moving in the right direction. But I think we’re all hopeful, for sure, that entertainment will come back next year. And as soon as we’re ready, enabled, and allowed to do so, we’ll be back at it.

What non-gaming amenities have you managed to ramp back up?

Most of our restaurants are open. From our Voltaggio Steak House to our TAP Sports Bar, to our National Market, which has multiple F&B quick-service venues. Saigon Street, Shake Shack. So, most of our F&B is open. But as far as non-gaming, that’s pretty much it. Our lounges and bars are also open.

Online gaming is usually not far behind in some sports betting jurisdictions—as Maryland will soon be. Have you been involved in lobbying efforts to bring this additional gambling option to the state?

The focus right now is on sports. The legislative process will start in January specific to sports. And that’s really what we’re focused on right now, both on the retail front and online. That’s where we are focused, and that’s where our energy has been. And what comes down the road is yet to be determined.

Virginia just approved four casinos. Are any of them close enough that it’s going to affect your market?

We’ve been monitoring that for a long time. And I’d be naïve to say that it won’t have some impact. The good thing is it’s geographically further away, towards the southern part of the state of Virginia. And most of our business, just like a lot of regional casinos, comes from an hour’s drive.

We’re very localized. But will there be some impact? There will be. What I will counter with that is, what we will gain with sports betting will far outweigh what we will lose from expansion of gaming in southern Virginia.

As far as competition within the Baltimore/Washington corridor, you’ve always distinguished yourself to maintain the top position among the three casino properties. How have you managed to do that, coming late to the market, as you did?

Obviously, Maryland Live! is the largest competitor, if you will. They’ve got a great team there. I’ve had an opportunity to meet some of their top executives. They’ve got a great facility. So, they’re formidable competitors. But we’re extremely proud of what we’ve built here. We invested heavily—over $1 billion into National Harbor. But we’re in a great market. We’re the benefactors of a large population.

But as you know, besides having a beautiful facility, it all comes down to the employees and our guest service. And that is something that you have to maintain. You have to work on it every single day. It’s not easy. The service component is big. We have a beautiful facility. We continue to invest in it. We continue to invest in the best games, so we’re constantly looking to have the best in attractive games on the floor, be it slot operations or table games. We are constantly tweaking our food and beverage offerings. We listen to our guests. We talk to them individually; we’re on the floor, and get their feedback. And to the extent that we have a lot of feedback in a certain direction, that’s where we move. We try to accommodate.