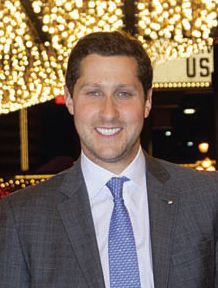 Downtown Las Vegas has established a remarkable rebound over the past few years, mostly due to an infusion of $500 million in new capital in the area. One of the hotels investing millions has been the Plaza, at the foot of Fremont Street. British-born Jonathan Jossel has been running the property for almost three years now, and explains what has made the needle move, and why the future couldn’t look any brighter for the Plaza. Jossel spoke with GGB Publisher Roger Gros at his offices at the Plaza in February. To hear a full podcast of this interview, visit GGBMagazine.com.

The Plaza is one of the most historic hotels in Downtown Las Vegas. At one point, the legendary Jackie Gaughan owned it. What is the ownership structure of the hotel today?

In 2004, Tamares, which is a privately owned real-estate development company, purchased it from Jackie Gaughan and his partners at the time, and have owned it since then. Tamares owns the real estate. Today, I am the CEO and licensee of the operating company, which is called PlayLV. So, Tamares owns the physical property, and I own the business of the Plaza.

Give us a timeline of what happened during the renovation process, and where we are today.

As you mentioned, Jackie Gaughan was a very well-known individual Downtown, a pioneer of Downtown, and did amazing things here, not just in terms of physical development, but in terms of how he made people feel, how he made the employees and team members feel. We have a lot of team members that have been here 25, 30, 40 years—longer than I’ve been alive. And they have very fond memories of those days, and obviously the evolution of the Plaza.

From about 2004, 2005 onwards, the Downtown properties obviously were older, and they had had a lot of wear and tear. They needed a little bit of new life added into them, and that took place at the Plaza in 2010 and 2011, when we closed down for a full remodel.

During that time, I was invited by our architect to go see all the furniture at the Fontainebleau, which was sitting in the basement. And I called the owner and told him about the opportunity to buy this furniture, and fortunately for us, he gave us the go-ahead to buy it on the spot. And so, that was the beginning of the remodel of the Plaza.

No one knew at the time that it was going to become such a big project, because it was, at the time, just a room refresh, which morphed into more restaurants, more casino remodels, and everything else that we ended up doing.

Since I got licensed two years ago, the main physical improvements have been to the pool deck. We did a $4 million remodel of our 60,000-square-foot pool. It has way exceeded our expectations of what a pool remodel could possibly do for this property, in terms of driving occupancy to the building, revenues at the pool, and just general awareness of the property. It sits in between the two towers, with a magnificent view of Downtown. We have 16 pickleball courts, which is the fastest-growing sport in America. We do music events up there. We have a great bar now. So, it’s really turned into an amenity.

We have live music, seven nights a week in the casino. We added a party pit in the front of the building. We’ve added about 150 new slot machines to the floor. We’ve really focused on the guest experience, and creating a bit more energy in the casino, because that’s what people want when they come Downtown. We added a new show, with the Scintas, which has been a big hit. We’ve added more bingo games, because we’re the only property Downtown to offer bingo.

But, I would say that the biggest change hasn’t been physical. It’s been more about the experience of our guests, really focusing on what people feel when they come to the Plaza. And that comes from changing the morale of the team to one dedicated to the customer.

What do you consider your target market? Tourists? A mix of tourists and locals?

There are two separate answers to that. I don’t think that anyone has a true target market in the hotel. You can’t control who’s going on Expedia, searching by location, price, whatever it is. So in the hotel, I think our target market is somewhat of a moving target. We’re seeing great growth in occupancy, and I think that’s driven by all the changes we’ve made in terms of the property and the advertising. In terms of the casino, it’s a little bit more strategic. We know who our target market is. We’ve seen a lot of great growth in terms of our Hawaiian market, our Midwest market, and the people that come here to play bingo. But I’d say for the casino, it’s a lot of Midwest, and probably skews a little older, 45-plus, for the casino.

How about your gaming philosophy in terms of the rules of the tables, the paybacks of the slot machines?

I think there are facts to prove that we have the best video poker pay tables in all of Downtown. We have very favorable rules in the table games. All of our blackjacks pay 3-2, not 6-5 like the Strip properties. We have crapless craps and 10 times odds. We have a good variation of games. We’ve looked at single-zero roulette, but we haven’t quite migrated over to that yet. But coming from England, single-zero roulette’s all we know. So, I think we have very favorable gaming conditions, and our players club is extremely rewarding as well.