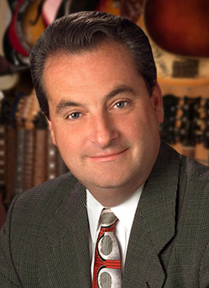 Responsible for all gaming, hospitality and entertainment operations at the Seminole Tribe of Florida since 2001, James F. Allen has guided the development of Seminole Gaming into one of the world’s most successful casino and integrated resort operators, with six casino sites located throughout Florida, and many other around the world.

He spoke with GGB Publisher Roger Gros during the opening of the Guitar Hotel in October.

GGB: Tell us about the new Guitar Hotel and what it means to the company and your customers.

Allen: We’ve got $1.5 billion in this expansion. Our customers have been so loyal and tremendously supportive of what we do here. But they were very patient. One day a wall was here, the next day it’s over there. We moved restaurants around, we moved roads. So to put all this major construction behind us is great for the property, but more importantly, for our guests.

The original facility was beautiful and we had a lot of success with it, but we wanted to create something that was more of an integrated resort—something more than just a locals casino. That was the goal and the budget mirrored that thought process, and hopefully the guests will love it.

Very humbly, we’ve had a lot of success with this business (both Hard Rock casinos in Florida) since I joined. Our business has increased more than 1,000 percent. We truly needed more rooms, so we looked at the options of a standard hotel tower or something different. We were trying to make a major statement.

When I came up with the idea to buy Hard Rock, I explained to the tribe that this is a long-term commitment. It will take time to grow the brand. We knew we had some work to do. This building has become the iconic statement. The tribe owns Hard Rock and we’re creating something we want the whole world to see. And now the brand is coming up on its 50th anniversary.

How difficult was it to build this hotel?

I went to the legendary structural engineer DeSimone Consulting Engineers. I know Vince DeSimone back from my days with Kerzner and Trump. He called me up and asked me if I was out of my blanking mind—how we were going to design a building that has structural integrity in the shape of a guitar? But it worked out and it looks great!

How were you able to open all these projects so quickly?

We’re a glutton for punishment. We just finished an $800 million expansion of the Hard Rock in Tampa. We took over Jack Casino in Cincinnati. The same day we opened the Guitar Hotel, we’re opening our brand new Hard Rock Hotel in Cabo. And we’ll open Hard Rock Sacramento next week.

We were really able to restructure the company. We expanded the hotel and casino divisions. We never want to forget the cafes and the relationships with our franchise partners, but the restaurant business is very difficult on a global basis.

We were selected in Barcelona after a very competitive process. We’re still working with the government of Catalonia, but frankly, there’s uncertainty with that government again, so we’ll navigate through that. We’re 100 percent committed to Spain and Catalonia.

We are competing in Athens. Two have qualified to be the finalists, ourselves and Mohegan Sun. We respect Mohegan. I worked directly for Sol Kerzner when we built it, so I know what was created there back in 1995. We know their facility and respect them, but we have a lot more experience internationally. We’re in 75 countries around the world and have been doing that for almost 50 years with experience working with local culture, government and currencies. When the dollar is strong, people think that’s good for our business. The opposite is true—it’s better when the dollar is weaker. When companies haven’t experienced that, it’s a learning curve. There’s no learning curve with Hard Rock International.

How about sports betting in Florida? Is the law that says no expansion of gaming without the voters’ approval going to apply?

Yes. Disney and Seminoles are two big names in the state of Florida. The voters spoke. They overwhelmingly—by more than 70 percent— said they no longer want the legislative body to be involved in gaming. They hadn’t been able to make a decision or set a clear direction in how to use that $400 million they got from us each year. The voters spoke. We’re a little surprised that now (the legislature) is saying they’re not going to listen to the voters. We’re happy to work with the state, but their ideas seem to change on a weekly basis.

When we were discussing different options with the state last year, sports betting was 100 percent on the agenda. We weren’t sure what they wanted to do with internet gaming, but we think internet gaming is the future, and any state that hasn’t figured that out is making a mistake, in my opinion. So we do believe it will continue to be a topic of conversation between the tribe, the sports teams, the parimutuels and others.