It’s the biggest moneymaker in casinos, but lots of U.S. players have never played baccarat. Here’s why the game is big in Asia, and could get bigger elsewhere. 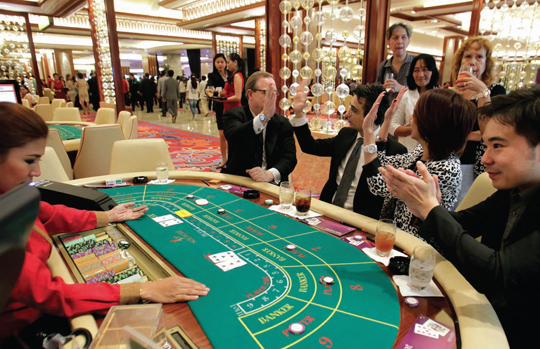 The subject is baccarat. So first, let’s get those James Bond references out of the way.

Yes, everybody’s favorite secret agent played baccarat in iconic films like Dr. No, Thunderball, and On Her Majesty’s Secret Service. Maybe that’s why the classic card game has enduring appeal—there’s nothing as elegant as a tuxedo-clad 007, breaking the bank in Monte Carlo, accompanied by a seductive dame who may or may not be a counterspy. But he’s not the only reason baccarat is popular.

Among Asian players, baccarat is a cultural tradition, a matter of superstition, fortune and fate, with the gods distributing their favor through a dealer’s shoe. The game is highly social, with players gathered around a table, sometimes riding the same bet, waiting breathlessly for the turn of the next card, sometimes even drawing an audience.

In addition, depending on the bet, baccarat has the lowest house edge of any casino game (1.06 percent on the banker side, 1.24 percent on the player side, an average of 1.2 percent). That means players stand a decent chance of winning—and winning big, if they bet big—though if they do so on banker, they have to pay a 5 percent commission on the winnings.

And last but not least, baccarat is easy to play, even for rank beginners.

The object of the game is strikingly simple: get two to three cards with values that equal eight or nine, betting on banker, player or tie, though the latter comes with a stiffer house edge of 14.36 percent.

Roger Snow, acknowledged baccarat wizard and senior vice president of Scientific Games, likens the game to an “elaborate coin flip. It’s heads or tails, player or banker, win or lose. And that’s it.”

Though there’s no skill or strategy involved—except, of course, in the active imaginations of some players—baccarat generates more revenue than any other table game. According to Forbes, in 2017 Macau’s casinos made more than 88 percent of a total $33.2 billion from baccarat.

“Nothing else is even in the same ZIP code, because baccarat drives a lot of high-limit action,” says Snow. “You’ll have super high-limit players betting $100,000 a hand.” Reportedly, in Macau and Singapore, bets of $500,000 are not unheard of.

“There’s no denying the impact baccarat has on table game performance at every casino where it’s offered,” agrees John Hemberger, senior vice president of table products at AGS. “The average bets are sometimes so significant, they can be the leading force for driving performance on a monthly basis.”

While baccarat is less important to the bottom line in U.S. casinos, it’s hardly insignificant. For example, in February 2018, the 350-plus baccarat tables in Las Vegas won $176.3 million, up 82 percent year-over-year, on total wagers of $1.25 billion, in a boost attributed to the Chinese New Year. But whenever international visitation drops—as it did after 9/11, during economic slumps, and so on—baccarat revenues also decline.

Also, in the 1990s and early 2000s, slot machines claimed up to 70 percent of the gaming area, and tables were increasingly shuffled off the floor. Manufacturers got to work to goose up the games; Hemberger says Snow’s Dragon Bonus side bet was a literal game-changer.

“It was so powerful, because it added volatility but in such a simple way that it kept the core game in place. Baccarat is like blackjack—the base game isn’t perfect, but it’s awfully close to being a perfect gambling experience.” And who wants to mess with perfect?

Commission-free baccarat streamlined the game, freeing dealers from having to pause to “make change like a paperboy,” Snow says. Mini-baccarat with lower stakes opened the game to mass players.

AGS’ Dai Bacc, introduced with great success in 2017, includes bonuses “that hit very infrequently, but pay significant amounts; think 40-to-1,” says Hemberger. “A third side bet, the ‘Kill’ bet, could result in a 70-to-1 payout. That’s when players really embraced this new idea: ‘We get that it’s not going to happen very often, but when it does, that’s a big payoff.’”

Progressives are “a real area of focus for suppliers right now,” Hemberger says, citing AGS’s Royal 9, with about 200 units in the field, as “one of the fastest growing products in our portfolio at the moment.”

One reason baccarat progressives failed in the past is because players had to split the pot, Hemberger says. “So if there was $100,000 on a progressive meter and four players at the table, if I won I only got $25,000. And that’s not a good deal.”

Royal 9 “very successfully individualizes the opportunity to win a progressive jackpot” by assigning distinct winning combinations to each player: for example, Seat 1 wins with a Jack of hearts and a Nine of spades, while Seat 2 wins with a King of clubs and Nine of diamonds.

“We have now allowed a player to win 100 percent of the jackpot, with everyone else getting ‘some type of payout,’ like a consolation prize.” Royal 9 is now live at MGM National Harbor, Mohegan Sun, Foxwoods and Maryland Live!, among other properties, with recent installations at Fallsview Casino and Caesars Windsor in Canada.

As if that isn’t enough, at G2E 2019 AGS presented a second-generation progressive, Bonus Spin Xtreme, which can link all table games in a casino and offer a single shared progressive jackpot—a first.

Hemberger cites its ability to provide “one unique progressive jackpot winner for community-style table games like roulette, baccarat and craps, while enabling all participating players to be rewarded with a community prize. That helps players encourage other players to make a bet, because they can win off each other’s hand. When you have so many games linked, you have the opportunity to have life-changing jackpots that can exceed $1 million.”

Which brings us to the inevitable question: does baccarat in all its iterations have staying power as the casino patron base changes?

Snow, for one, says you bet.

“Baccarat players, who have always been very traditional, have allowed the games to go commission-free. They’ve allowed the side bets and EZ Baccarat. I think baccarat players today, especially younger baccarat players, are more embracing of new content. And in this tough world, that makes me optimistic that they’ll say, ‘Wow, that’s a compelling idea. Wow, I want to play that game too.’” 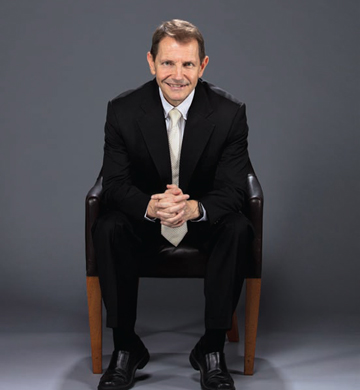 GGB: Macau casinos made more than 88 percent of revenues from baccarat last year, and Singapore’s casinos also get much of their GGR from the game—unlike the U.S., where slots dominate. What’s the appeal for your players there?

Andrew MacDonald: Baccarat is perceived as a game that’s both easy to learn and offers fair odds. There’s also a strong communal aspect to baccarat that we’ve found important to many of our guests. Many patrons prefer to follow trends, and large groups will naturally migrate to form around tables where they believe strong trends occur. This adds greater excitement from a communal participation perspective.

In addition to the fairness of the game and the community aspect, many baccarat players exhibit a preference for the level of player involvement in the game. Players interpret trends from the results displayed on the baccarat scoreboard and players squeeze the cards, thus having involvement in the outcome of the game. And of course, there is the excitement of the reveal.

Why is baccarat so popular given that there’s not much (if any) skill involved? Doesn’t that take some of the fun and challenge out of it?

It’s important to remember that every player is unique, but we have observed that players in our casinos in Asia broadly value one or more constructs that are embodied in the play of baccarat: control, community, and face.

Baccarat is also a highly social and communal game. Many players abide by an etiquette of following the largest bettor’s wagering decision, creating a craps-like environment where everyone wins and loses together, amplified by a cultural group orientation. The unparalleled high limits and VIP aesthetic that accompany premium baccarat also allow our guests to gain a great deal of face.

Is baccarat the preferred game in VIP rooms?

Baccarat and its variations have been a preferred game among VIPs for a very long time: from European aristocracy to the Rat Pack to the present day. As far as modern VIP rooms, it’s the dominant game in Asia and in international properties that specialize in VIP Asian play.

From the house perspective, are there risks and rewards when baccarat rules?

Baccarat is not typically a very volatile game compared with roulette or most slot machines. However, the scale of its high-end play can lead to substantial short-term volatility, as large wagers from a few patrons within a short period can create a large percentage of an operator’s betting volume over relatively few decisions.

For smaller operators who lack volume or sufficiently deep pockets, high-limit baccarat can be untenable. The larger operators’ deep pool of both mass and VIP play smooths out this volatility and greatly reduces their risk.

But baccarat need not be a premium segment-only game, and there exists healthy mass business at a variety of price points for the game. A company needs to astutely evaluate its financial position, its tolerance for risk, and its strategy when determining which customers to pursue and what limits to set.

Can baccarat players use any kind of strategy to beat the odds?

Many players have their own strategies, whether based on analysis of a trend, a betting system, or some method of bankroll management. Everyone has their own preferences, and one of the goals of side bets is to give our patrons betting choices that are exciting and offered at a variety of price points.

As an example, Tiger Baccarat, which was developed in-house, has been very successful in giving players these kinds of choices, and we’ve seen great engagement across many customer segments.

What’s the state of baccarat in the U.S.?

While Nevada has seen a decline in baccarat win in the last few years, some jurisdictions like Atlantic City have experienced large-scale growth. Baccarat remains the premium game in terms of revenue generation per-table.

We see a lot of potential in the U.S. through new baccarat options. For example, following our success in Asia, we conducted a substantial rollout of live-dealt ETG baccarat at the Venetian Resort Las Vegas, allowing us to tap into new players who may be looking for different price points or experiences than offered on our more traditional baccarat tables. An example of such a differentiator for ETG baccarat is the ability for players to access multiple dealing tables to play on from a single ETG terminal.

Do your players gravitate more to commission-free games?

At Marina Bay Sands, most of the baccarat is commission-free. Macau, which has historically been commission-dominant, recently has seen a great uptick in the proportion of no-commission baccarat.

No-commission offers a number of advantages: one-to-one payouts, fewer dealer errors, and improved speed. While commission baccarat has long been viewed as the preferred game of high rollers, we’ve had remarkable success in introducing non-commission games into high-limit areas. Our premium players have actively embraced the game.

Is baccarat popular among younger Asian players, or is there a generational divide?

The proportion of our total baccarat player database in the 21-to-30 age group has stayed fairly constant. We feel confident that the game has something to offer every age group.