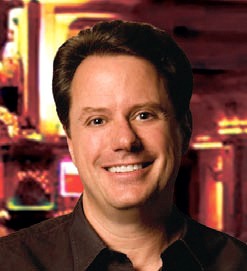 Shuffle Master, Inc. has undergone a big change in the past several years. Starting with the leadership of the late Tim Parrott and now continuing under Gavin Isaacs, the company is the one of the largest table-game providers in the gaming industry.

Louis Castle joined the company as chief strategy officer in late 2011, but was on the board for six years prior to his appointment, so he has an intimate knowledge of the company. He also has experience with several internet technology companies, including Zynga, the leading social poker game on the internet. Castle plans to transition Shuffle Master as an intellectual property provider, but for now, he’s concentrating on the company’s strength: shufflers and proprietary table games. He spoke with Global Gaming Business Publisher Roger Gros at the Shuffle Master headquarters in Las Vegas in June.

To hear a full podcast of this interview, click on the Casino Communications link.

GGB: What is your role at Shuffle Master?

Castle: I have an incredibly easily job overseeing the R&D side of our company. Nathan Wadds reports to me for R&D, but honestly, Nathan is such a superstar; I just have a small oversight role there. I’ve spent a lot of time in software development, and especially in different kinds of tools, so where I contribute on the R&D side is trying to help get us all on the same technology basis from a software point of view, and Nathan’s been running the same kind of idea on a hardware side. We’re trying to bring our costs down for delivering our content. And most importantly, we’re in the business of creating intellectual property. So it’s really when Roger Snow creates a table game, that we can take that property and quickly move it onto lots of different platforms—ETS platforms, EGMs, if it’s appropriate, and of course, online.

Shuffle Master is known as a company that manufacturers shuffling machines and retail specialty table games. But the company does much more than that. Explain what else you do and how you plan to get that message out.

Let’s talk about what makes almost all of the money for the company, which is not the online space. I hope to change that, but first and foremost, we’re an intellectual property company. We create table games. This is a very good niche, because first of all, there’s a lot of different patents, especially in the United States, and copyrights and trademarks. And player adoption really comes down to the familiarity with brands, and the familiarity with concepts. But there’s a very narrow window, if you will, in design, where you can improve upon the amount of money a casino can make on a table game, over what somebody would make playing blackjack or a non-proprietary table game. So really, these games only live in the world—and there’s about 30 of them that we have out there right now—if they are empirically better games.

Part of the way we’ve built that library of games and patents is we’ve acquired a lot of smaller companies that had just gotten something rolling, and were looking at 10 or 15 years before they could get worldwide distribution. So we were able to acquire them, give them a lot more financial benefit, and they get to spend the next 15 years lying on a beach in Tahiti, hopefully.

Tell us about the Ongame Network acquisition. What does that company do, and how will Shuffle Master use it?

First of all, we haven’t finalized the acquisition, but that should happen soon. It’s really slick technology. It’s using what’s called elastic databases, and elastic cloud computing, which is really cool stuff. But, although we are building our own platform to deliver our own table games, which are implicitly in the casino segment, there’s another huge segment of the business. There are casino games that include table games and slots. There’s sports betting, and then there’s poker. The reason poker’s broken out separately, even though it’s a table game, is that poker is a player-versus-player game with a house rake. So it’s substantially different than what casino games are, where the math is really driving the game.

So, we’re looking at building a poker network. And when we looked at the opportunities out there, we looked at everything, believe me. Everything that was for sale, even things that people don’t realize are for sale, even partnerships. And we kept coming back to the same thing, which is that the most important thing for B2C operators is to build their client base. And since Shuffle Master is a B2B company, we can help our customers get there.

There are two big buckets here. One is you have a very strong casino or casino group that wants to offer poker across their entire casino network. And those folks would come to us and they would have a branded casino online that would have poker, and we would also, of course, hope that they would take our proprietary table games, also branded for them. So, the consumer won’t really see our brands. They won’t see Ongame, they won’t see Shuffle Master. They’ll see the brand of the casino. That’s always our goal.