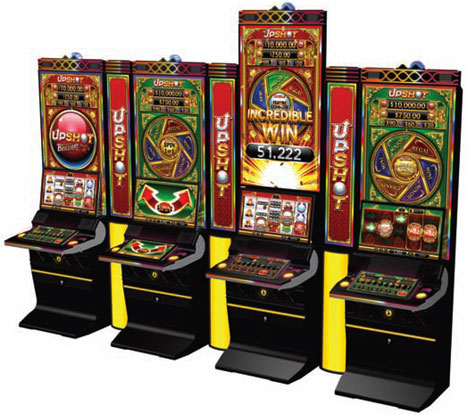 Within the space of a decade, Incredible Technologies has matured as a casino slot supplier.

Based just outside Chicago, the highly successful amusement game manufacturer—supplier of the legendary tavern game Golden Tee Golf—presented its first casino slots to the industry at the 2012 Global Gaming Expo. By 2019, the company had to move production of Golden Tee Golf and other amusement games out of its Illinois plant to accommodate what had become a thriving slot business.

Last year, the company moved into new markets with a new Class II system and an increasing presence online through partnerships with GAN and Spin Games.

IT’s relatively young slot business has been marked by testing and retesting its games, and consequent G2E game introductions accompanied by hard data showing the titles to be proven earners. It also has been marked by an evolution of hardware, with its Infinity family of cabinets progressing from the original Infinity U23 to the tall Infinity Skybox, to the large-format Infinity V55 and Infinity Summit premium cabinets.

But IT’s newest hardware, to be officially launched at G2E, is something else altogether. Already in the field in a few jurisdictions, the Prism format and its first core cabinet, the Prism VXP, is turning more than a few heads in the industry.

“Prism is our first new platform since we debuted Infinity in 2013,” says Caitlin Harte, director of product marketing for Incredible Technologies. “Infinity was really a workhorse platform for us; we built upon it with different screens and different formats, but we feel like the time is right now to introduce a brand new platform.”

The new platform has increased horsepower, brighter graphics, and an oversized LED button panel. “Prism to us really is the combination of light and shape,” Harte says. “The cabinet itself embodies that by using reflective light and creating unique shapes as well.”

But what makes the platform’s inaugural cabinet, Prism VXP, special is what that VXP stands for—“vertical expansion.”

The cabinet presents three screens to the player—the main 27-inch 4K touchscreen landscape monitor is augmented by the 18.5-inch button deck, the largest in the business, which doubles as an extra touchscreen monitor for use in various bonuses and game play. But sitting behind the main game screen is a giant 55-inch flat-screen 4K monitor. 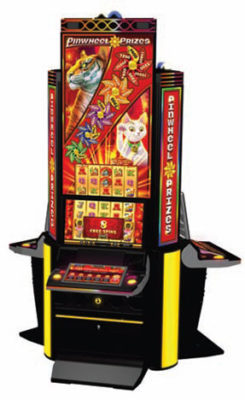 But the real innovation here is that the big screen doesn’t just sit there. During bonus game play, the 55-inch monitor physically rises, using a commercial-grade motor to smoothly move into position for game mechanics on the entire grand display.

“The monitor rises a little over a foot to add game play, and each of the launch game families utilizes it in a different way,” Harte explains. When it is in its lowered position, it provides a lighting effect to frame the main game screen.

Harte says IT’s engineers doubled up on the game software, so in the event of a failure in the motor, the games play completely as normal on the monitors provided. “Every bonus will play the same way; the display would just not expand,” she says. “The art smartly readjusts, so there is no downtime.”

However, she says in all likelihood, the fail-safe will never be triggered. “The motor is commercial grade; it’s rated to go up and down hundreds of times a day over five years. We’ve had it running, going up and down in our office, for hundreds of thousands of spins of bonus events, and it’s never failed over all that time.”

The cabinet fits in a standard footprint, and since it is designed as a core-game cabinet, it has many other special features besides the moving monitor. For one, it has the oversized touchscreen button panel.

“The idea behind that is to integrate more game play and put more player information right in front of the player’s face, as opposed to having to dig into help screens,” Harte says. “But what having a screen so large down there means is that it allows our designers to basically have a third monitor for game-play elements.”

Harte adds that the Prism VXP is IT’s first cabinet with an integrated stand and spacers. It also is equipped with a new sound package. “It actually has two speakers overhead within the light bar,” Harte says. “So we can do dual-channel audio, putting jackpot bells or other attract-mode sounds in the background while keeping the game soundtrack going below.”

Player comfort and safety also were taken into account. Thick plastic shields players from any contact with moving parts. There are dual bash buttons, and a newly designed wedge between units that allows for a more versatile spacing arrangement to promote distancing. “We were the first company with a 4K video wedge between games, with our V55 product,” says Harte. “This is an upgraded version. It has a 4K screen, but a much slimmer profile, and it’s built on its own base, which allows us to create a lot of different shapes—it is cylindrical, which allows it to create more flexible angles.” 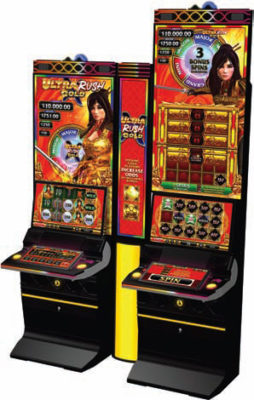 The UpShot family consists of initial games Brilliant 7s and Prosperity Rising. Both are 25-line games with a pinball-style bonus initiated on the 18.5-inch touchscreen button deck. In the interactive UpShot Bonus, pinball springs appear on the button deck and the player pushes them to launch virtual pinballs at the expanded monitor, which displays four levels of moving targets.

As the bonus moves to the next level, the credit values increase leading up to the top level, where wheels dart across the screen. If one is struck, players get to spin the wheel for a guaranteed progressive or jackpot prize.

There also is a free-spin bonus, with “Wild Upgrade” scatter symbols. When one of these symbols lands, a second three-by-five reel set appears over the main screen. The VXP display elevates with each Wild Upgrade awarded, with the chance to add up to three extra reel sets. Players can also collect multiple wheel scatter symbols during the event, which can lead to one of the jackpots.

UpShot Prosperity Rising places the interactive bonus events in an Asian theme. In the 10-spin free-game round of this game, a separate pinball bonus is triggered by only one UpShot scatter symbol. The player launches one pinball for credit awards, added wilds, or a wheel spin for progressive and jackpot prizes.

The free-spin round in each game triggers the VXP feature. The reels expand into a double set with 40 additional pay lines for eight free spins. In Majestic Oasis, the free-spin round features a lock-and-spin mechanic on the top reel set. Pinwheel scatters lock in place and stay until three fill a reel to trigger a spin of the corresponding pinwheel.

The Ultra Rush Gold X family, with initial base games Wei Yi and Bingwen, features cash-on-reels symbols that display credit amounts and four jackpots. The bonus feature plays out on a reel set including only cash-on-reels and jackpot symbols, in a hold-and-spin feature with three-spin cycles.

The Power Push family, with titles Shiseijuu Fortunes and Lóng de Xǐyuè, uses the moving monitor to simulate the old coin-pusher machines that dotted casinos in the 1980s. Primary games feature an eight-spin persistent feature in which coins are collected, and return to the reels after eight spins as wild symbols. The player also collects letters to spell out the word “BONUS,” which triggers the VXP feature.

The VXP feature replicates a coin-pusher game, with the top screen rising to spill coin awards and several icons representing 10 jackpots into the chamber. The screen descends as a pusher sends prizes down to a bottom chamber. The player is awarded three “pushes.”

The games are all offered in player-selectable multi-denomination mode.

IT will display games in all its other formats at the G2E show, including its Grand Crystal 2 electronic table games launched early this year. But Prism will be the star of the show.

All of the games on the Prism platform are core, for-sale offerings. As is typical, Incredible Technologies set up test banks in a handful of locations over the summer, and will arrive at G2E with earnings numbers to back up the game concepts. “We don’t like to go to G2E without data to back up anything that we bring,” says Harte. “We will be at G2E with four game families containing eight titles that have data on them, ready to ship at the show. That’s important to us.”

Harte adds that all eight of the titles were developed during last year’s pandemic shutdowns, with no more than two people in the office at any one time. “It’s actually quite impressive.”

Impressive, actually, has been the norm for IT.