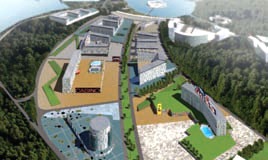 Executives with First Gambling Company of the East say its long-delayed 0 million gaming resort in Russia’s Primorye casino district will open in phases starting this summer.

Ho has said Melco Crown is grappling with “challenging market conditions” in Macau but expects great success for its Studio City project, set to open this fall, as well as the City of Dreams Manila that opened in the Philippines in February.

In addition to the Primorye facility, which was first announced in 2013, Melco International is also pursuing possible casino projects in Barcelona and the Republic of Georgia.

Other projects in the gambling zone near Vladivostok represent a total of $2.2 billion in investments. According to the Moscow Times, Cambodia-based NagaCorp and the Royal Time Group are also expected to break ground on resorts in the vicinity sometime this year.

“Given the favorable location of Vladivostok, we are sure the gaming zone can become a second Macau,” Wang has said.

The zone is a few hours by air from Tokyo, Seoul and Beijing and is expected to attract gamblers from across Asia as well as Russia. Eventually, the zone is set to include 16 hotel-casino complexes on 620 hectares (1,532 acres).

The Russian government first considered a gambling zone in the Primorye region in 2009, but did not get under way until 2013. Olympic host city Sochi and former Ukrainian province of Crimea also have been approved for gambling zones. A fourth zone in the Krasnodar Krai region will reportedly be removed from the list, according to the news agency Tass.