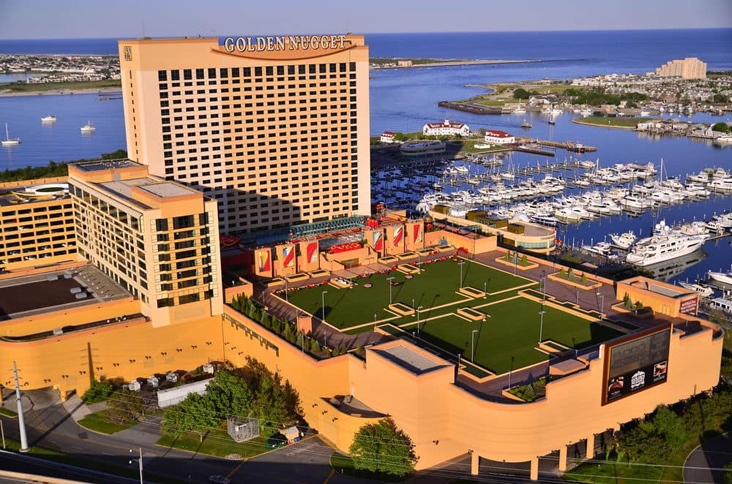 The year 2016 saw casino revenue rise for the first time since 2006, thanks in part to the nearly $200 million generated by the state’s online gaming operators. Even the mainstream Associated Press is convinced. “There’s no longer much of a debate about it: Internet gambling is helping to save Atlantic City’s casinos,” AP writer Wayne Parry wrote in April.

The benefits of online gambling can be seen industry-wide, as online casinos contributed 8 percent of all gaming revenue generated by Atlantic City casinos in 2016.

Some casinos have been able to leverage online gaming more than others, but no casino has been strengthened by the addition of online gambling more than Golden Nugget Atlantic City.

And because the Landry’s-owned property is one of the city’s smallest casinos, online gaming also constitutes a larger percentage of its revenue. In 2016, online gaming accounted for nearly 17 percent of Golden Nugget’s total gaming revenue—more than double the industry average. By way of comparison, online gaming was just 6 percent of Borgata’s total casino revenue in 2016.

Like Master Yoda’s control over The Force, Golden Nugget is proving that when it comes to online gambling, “size matters not.”

Golden Nugget has a small footprint compared to some of its high-profile neighbors like Borgata or Harrah’s.

But these size deficits don’t matter in the virtual world of online gambling. Golden Nugget’s 2016 online gaming market share was 21.5 percent, good enough for second place behind Borgata. More recently, Golden Nugget has been getting the better of Borgata. In seven of the last eight months, Golden Nugget posted higher monthly iGaming revenue numbers than Borgata.

Since the beginning of 2017, Golden Nugget has left Borgata in the rearview mirror, and is now the clear market leader in New Jersey. Whereas most online operators in New Jersey are ecstatic when their monthly revenue tops $4 million, Golden Nugget has reached the $5 million mark in each of the last three months (GNAC is the only online operator that has eclipsed the $5 million mark), including $6 million in March.

As impressive as its current numbers are, the road Golden Nugget traveled to get to the top of the New Jersey online gambling market is nothing short of remarkable.

A Blessing in Disguise

Golden Nugget got off to a rocky start in New Jersey.

On November 21, 2013, Borgata, Tropicana, Trump Taj Mahal, Trump Plaza, Caesars and Golden Nugget were all part of New Jersey’s synchronized online gambling launch. During this “soft launch,” all of the operators were being put through a five-day field test by the New Jersey Division of Gaming Enforcement. Golden Nugget was the only operator that didn’t pass the test.

Golden Nugget’s online casino software, powered at the time by Bally Systems, wasn’t ready for prime time. Technical difficulties led to the site being pulled almost as soon as it launched.

So, while its competitors were busy gobbling up market share, Golden Nugget had to sit on the sidelines for several weeks, as it worked out the software kinks.

In the end, Golden Nugget’s late entry turned out to be a bit of a lucky break.

Not only did Golden Nugget avoid association with the worst of the early geolocation and payment processing issues that plagued the industry; when it did launch in December, it walked into a marketing vacuum.

“As our competitors all launched marketing campaigns at the same time, they really struggled to acquire customers cost-effectively,” Winter said. “And in most cases, the operators had pulled back from their marketing spend already.

“That gave us the opportunity to achieve a disproportionately high share of voice and acceptable CPAs (cost per acquisition).”

To use a sports analogy, Golden Nugget was the short-yardage running back who came in for one play and scored the game-winning touchdown after the offense marched 80 yards down the field to the 1-yard line.

The Secret to Golden Nugget’s Success

Golden Nugget may have caught a lucky break, but luck isn’t why Golden Nugget finds itself at the top of the New Jersey online gaming hierarchy. Golden Nugget’s success is a testament to the company’s vision and determination to be the best, and it’s thrived under the stewardship of Winter and his team.

“We are 100 percent focused on New Jersey,” Winter says. “Since day one, we’ve been consistent in investing in this market, be that on marketing, product or user experience. We strive to be the No. 1 choice for the most demanding New Jersey casino players.

“Generally speaking, I think the user experience lives up to the brand promise—that is, to offer the best and most authentic online product and service to traditional casino players.”

In order to live up to its own lofty expectations, and create the best user experience, Golden Nugget takes a multi-faceted approach. As Winter puts it, “That superior user experience comes in many different ways, from an ergonomic and slick user interface to exclusive games, fast withdrawals, 24/7 customer service and dedicated VIP management.

“We also have a very personal relationship with our patrons, with over 40 staff working in Atlantic City across customer service and our live dealer studio. New Jersey players value this proximity.”

No Reward Without Risk

Golden Nugget also has benefited from a number of bold moves.

“The online gaming industry as a whole, not only in the U.S., is very fast-changing, and requires operators to quickly adapt to stay relevant,” Winter says. “Besides, you don’t only compete with other online real-money gaming operators, but with lots of alterative entertainment options, such as daily fantasy leagues, social gaming, Netflix… You need to always give more fun and entertainment, in a more convenient fashion, to deserve players’ share of wallet.

“New Jersey is also a very competitive market, with no less than 14 online casinos. It is true that some of them are perhaps focusing less on this particular market because they operate much larger businesses outside New Jersey, but others are very active. To differentiate our brand, we need product innovations as well as regular enhancements across the board.”

Golden Nugget caught another lucky break when it decided to offer a home to Betfair’s online casino.

In 2014, following the closure of Trump Plaza, Betfair’s New Jersey online casino found itself without a casino partner. Caesars took in Betfair on a temporary basis, but in the end it was Golden Nugget that offered Betfair a permanent home.

But it wasn’t without some risk, as the relationship between Betfair and Golden Nugget was the first instance in New Jersey where the land-based casino’s online brand was powered by different software than the sub-brand.

The Betfair experiment worked so well GNAC went back to the same well a couple years later.

In 2016, Golden Nugget reached an agreement with Rush Street Gaming, where the latter would launch a New Jersey online gaming site for its Philadelphia-based SugarHouse Casino under GNAC’s online gaming license. This agreement will likely pay off down the road, as it’s widely believed the deal will be reciprocated by Rush Street when Pennsylvania legalizes online gaming.

Golden Nugget also has made a number of shrewd in-house business decisions that ultimately improved its product.

There was a platform switch, from Bally to NYX in 2015 following tthe sale of Bally Technologies to Scientific Games. “On our end, we wanted a fully committed partner to keep improving their platform and our players’ experience,” says Winter. “So we both figured out it was best to change.”

It was also risky, as no other New Jersey operator had switched online platforms prior to GNAC’s move to NYX.

With NYX, Golden Nugget possesses a catalog of games that now numbers over 400, it’s experimented with a loss-back rewards program, and GNAC is expected to roll out virtual sports in the very near future.

But all of this pales in comparison to the most important product innovation Golden Nugget has brought to the New Jersey online gaming market: the launch of live-dealer games.

Unsurprisingly, this was also one of the biggest risks Golden Nugget has taken.

Live-dealer games have been a runaway success for Golden Nugget. Since their debut in the fall of 2016, Golden Nugget went from $3.5 million a month to $5 million and even $6 million. It should be noted that PlaySugarHouse.com launched two months after live-dealer games, and likely has something to do with the uptick in revenue.

“For the first time, an online brand is embodied with real dealers and real player interactions,” Winter says. “We believe this has attracted patrons who would not have played online otherwise, for it was perceived somewhat cold and too far from the social experience a brick-and-mortar casino typically offers.”

According to Winter, the company’s internal surveys indicate one of the main reasons brick-and-mortar customers were reticent to register for online accounts was because of a lack of trust. He says live-dealer games help remedy this concern.

“It helps building further trust in online gaming in a U.S. market where online gambling was still illegal three years ago,” Winter says. “Live-dealer is the best possible answer to their concerns.”

And as was the case with the SugarHouse deal—which opens up the possibility of Golden Nugget launching a Pennsylvania online casino—live-dealer games are creating new opportunities for Golden Nugget.

“We are also opening up our live-dealer studio to new brands,” Winter says, “which will help us further improve our offerings—adding tables, increasing opening hours and launching new games.”

The Future in New Jersey and Beyond

Online gambling has been good to Golden Nugget. But Winter believes it can be better. A lot better.

“In New Jersey, we see still a high potential for growth, with the market probably topping $400 million within four years,” Winter states. “We have a solid road map of product enhancements coming up, which should help us capture our fair share of this growth despite more brands going live in the market. For 2017 alone, we are targeting 50 percent revenue growth for our brand and are ahead of our projection after five months.”

Golden Nugget also is exploring its opportunities outside the borders of the Garden State.

Winter also mentions Nevada, Louisiana and Mississippi, three states where Golden Nugget (Landry’s) owns casinos, and states where he indicates the company would like to offer online casino games, if it’s authorized.

“There are also interesting opportunities outside online real-money casinos, such as social gaming and DFS,” Winter adds. “With a brand that is recognized and trusted nationwide and more than 500 U.S. locations owned by our parent company Landry’s, we have great assets to leverage.”

If Golden Nugget’s success in New Jersey is any indication, it will indeed leverage those assets.