Will high-tax states unwittingly put a lid on their online industries? 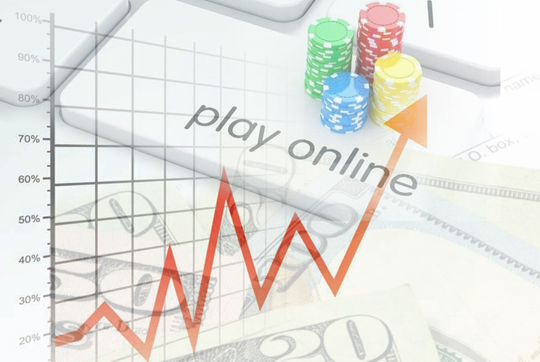 Back in 2017, Rep. Scott Petri, then chairman of the Pennsylvania House Gaming Oversight Committee, advanced a novel argument for hefty iGaming taxes.

Petri said to tax online games at a lesser rate than land-based operations would be, well, kind of mean to the casinos.

“If a casino has employees and spends $700 million to operate, I don’t believe online can’t be successful at those rates,” Petri said. “They may not want to pay it; it may be more appetizing to place their capital in other states. But lowering the rate for online effectively will be penalizing casinos for having accepted the previous rate.”

He failed to mention that existing casinos would be running some of those online operations, along with their interactive partners. For example, Harrah’s Philadelphia will launch its online arm with 888/Scientific Games. Hollywood Casino at Penn National Race Course will partner with IGT for iGaming and William Hill for mobile sports betting. And so on.

The projected tax rates for iGaming in the Keystone State are up there, at 54% for slots and 36% for sports wagers. Some operators seem to be buying in less to turn a meaningful profit than to avoid being left on the sidelines or depriving customers of an expected amenity.

In March, Penn National CEO Tim Wilmott, outgoing chairman and CEO of the American Gaming Association, said the company will “leverage this strategic opportunity long-term,” with “the hope that we can work to bring the tax rate in line.”

Steep tax rates on gaming have long divided policymakers and gaming operators. Operators say they should be able to keep more of the profits they generate so they can reinvest in their products and stay ahead of the competition, which is proliferating like kudzu. Tax-happy lawmakers say despite the high cost of entry and the state’s big cut, the casinos are also raking it in, so everybody wins.

If the setup is perceived by some as unfairly pinching operators, it’s been a bonanza for governments so far. Pennsylvania has proven “the most successful in delivering dollars to the state,” according to Petri, who has since gone on to greater things at the Philadelphia Parking Authority.

That argument holds some weight, says gaming analyst and consultant Steve Ruddock. “When Pennsylvania legalized casino gambling, it imposed a 54% tax on slot machine revenue and everyone said it wouldn’t work: RTPs would be too low, and casinos would churn players too fast or lose them to nearby states with better payouts.

“All Pennsylvania has done is become the second largest casino market in the nation, trailing only Nevada.”

The expectation that states with high tax rates would price operators out of their respective markets “doesn’t ring true, at least for now,” Ruddock says. “West Virginia, which was led to believe a low tax would maximize revenue for the state, starts to second-guess its decision when it sees Pennsylvania and Rhode Island receiving more tax revenue.”

“Absolutely,” Ruddock says. “Online operators don’t have to renovate, expand their bricks-and-mortar facilities or purchase new gambling equipment, but they do need to invest and reinvest in their products and internal systems. Capital investment in the online gambling space has to do with innovation and technology. If money that would normally go towards marketing and product development is headed to the state in the form of taxes, that will stifle innovation. New products and the ability to properly market them will be eroded.

“The question is, at what point does the tax rate become burdensome enough that it causes operators to reduce the amount they spend on marketing and product development? Is it 15%, 20%, 36%? And conversely, at what point is the tax rate too operator-friendly—is it 6%, 10%, 12%?”

In U.S. iGaming markets, he says, this is “the great unknown.”

At the conference of the National Council of Legislators from Gaming States in January, Florida gaming attorney Marc Dunbar took on the Pennsylvania model for sports wagering, which is taxed at 36%, the highest rate in the nation.

He said policymakers should “create an environment to allow these technology businesses to thrive and to reinvest in more technology,” without “regulatory or tax handcuffs.”

What’s true of land-based operations is true online, says Dunbar, of the Tallahassee law firm Dean Mead. He refutes the contention that online ops don’t need as much money because they’re—well, virtual, out there in the ether, with little overhead and no buildings, parking lots, slot machines or people to manage them.

“It’s a lot easier to scale an online or mobile product, so you hear the argument that you can tax them at a higher rate because of the limited capital infrastructure. But you have to appreciate that what drives success in mobile is the continued innovation,” he says.

For example, look at Epic Games’ epic success with the video game Fortnite. The wildly popular series, launched in 2017, propelled the North Carolina company’s valuation into the $15 billion range by 2018.

“They attribute it completely to the ability to continue to evolve the product, because they have the money,” says Dunbar. “If you tax mobile betting at a high rate, you’re going to create for the most part a static product that doesn’t innovate and doesn’t evolve.”

At the January conference, Kevin O’Toole, executive director of the Pennsylvania Gaming Control Board, continued to bang the drum for that state’s model.

“The player, regardless of what type of gambling they like, has no concern about the tax rate,” he said. “The tax rate affects other things, but it doesn’t effect a patron’s decision on where to gamble or what type of activity they want to gamble on.”

But it’s the tax rate that causes apoplectic reactions in some operators. Eric Schippers, senior vice president of government affairs for Penn National Gaming, has been among the outspoken, saying Pennsylvania may end up “strangling the golden goose” if it doesn’t let its operators make more money.

“It’s hard to explain the logic of policymakers,” Dunbar says. “Sometimes they run with emotion and without regard to logic. They frankly don’t want to educate themselves because it will force them to disprove their own biases.” 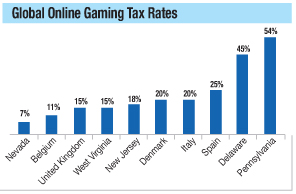 One of the most persuasive arguments for legal, regulated online and mobile gaming is that it brings existing activity above ground and quashes offshore and illegal operations. Do higher tax rates have any impact on that?

Vic Salerno says a resounding maybe. According to the legendary Nevada bookmaker, CEO of USFantasy Sports, “The biggest thing to ask with any tax rate is, are we competitive with the black market, which includes illegal bookmakers and offshore companies? If we’re not competitive, our revenues are going to go down. When you get to states like Pennsylvania or Rhode Island with higher taxes, the customers sooner rather than later are going to figure out they’re not getting back as much as they should. Then they’ll go back to wagering with their offshore or illegal bookmakers.”

After Rhode Island legalized sports betting in November, March Madness more than lived up to its name at the state’s Twin River and Tiverton casinos.

“We had a mob in there,” says Phil Juliano, chief marketing officer and senior vice president of Twin River Management. “There was spillover to the table games and food and beverage.”

After mobile sports betting launches, “that crowd is outta here,” he says. With no crowd, there’s reduced need for staff. Juliano calls it “a potential tragedy.”

Mobile wagers are a sure thing now: the bill is on Governor Gina Raimondo’s desk, and the projected revenues are part of her budget. The tax on sports bets is a whopping 51% with 32% for the vendor and just 17% for the casinos. The industry in the state is overseen by the Rhode Island Lottery.

Juliano hopes his concerns are unfounded. “If the participation grows because of the phenomenon of iGaming, it’s hard to argue against that. But if the taxes and costs exceed the operators’ return in the land-based casino, that’s a major concern.”

Right now, the numbers don’t seem to add up. Casinos in Rhode Island retain just under 28% of gross gaming revenues. “If we lost a million visits out of the land-based casino to iGaming at an end game for us of 10%, we would have lost 18% and the only thing that would outgrow that would be a participation rate that’s radically different, so we would trade volume for margin,” says Juliano. “We would have to grow 3 million to 4 million more visits to just stay even.”

John E. Taylor, Jr., Twin River’s chairman of the board, hopes the iGaming player is an add-on, not a defector from the casino sports book. “The early information out of New Jersey is that the majority of online players are not traditional casino players. If introducing your interactive extension introduces your brand to a new and different player, that would be a good thing.”

The states are not the only ones getting a piece of the action. The federal tax—(.25% of handle) is also “baked into the cake,” says Ruddock. “As legal sports betting continues to expand in the U.S., it will be interesting to see if the government provides some transparency when it comes to where the federal sports betting tax goes. Right now, no one knows.”

And while a .25% tax rate doesn’t seem like much, it is, because it’s a tax on the handle—the total money bet—rather than gross gaming revenue. In Nevada, where casinos pay a 6.75% tax rate on GGR, the additional federal handle tax means an effective 12% tax on sports betting GGR, almost doubling the state tax rate.

Sports leagues are also at the feedbag, demanding so-called “integrity fees” as compensation for the legalization of sports betting, which they fought for many years. The American Gaming Association isn’t buying it, and neither is most of the American public.

According to the AGA, a recent poll found that only 23% of Americans believe the leagues should collect a fee from the amount wagered on sports, while 55% are opposed.

“The results of this research are overwhelmingly clear,” said Sara Slane, the AGA’s senior vice president. “Consumers want legal sports betting, they believe it should be regulated by state and tribal governments, and they don’t think the leagues should get a cut.”

Ruddock agrees. “Whatever the preferred nomenclature of the day—integrity fees, royalty fees, data fees—league demands for a cut of sports betting money is a demand for something for nothing.

“Sports betting wasn’t created out of whole cloth on May 14, 2018,” he says. “The insinuation by the leagues that they suddenly have integrity concerns because sports betting is being moved from illegal to legal markets doesn’t stand up to the smell test.

“Either the leagues are looking for a handout, or they’ve been grossly negligent about integrity up until now.”

Salerno, too, bristles at the leagues’ demands.

“Who’s been protecting the integrity of sports for the past 50 years? The bookmakers. In the NBA finals last year, LeBron James had a broken hand, the NBA knew about it and they didn’t tell us. Where’s the integrity in something like that? Call it what it is—a royalty fee.”

If the leagues prosper from sports betting, will customers have cause to question the game outcomes?

The repercussions of high taxes on online and mobile bets can only be calculated over time. It may not be a close game.