With iGaming rapidly expanding, could the Wire Act be redefined again? 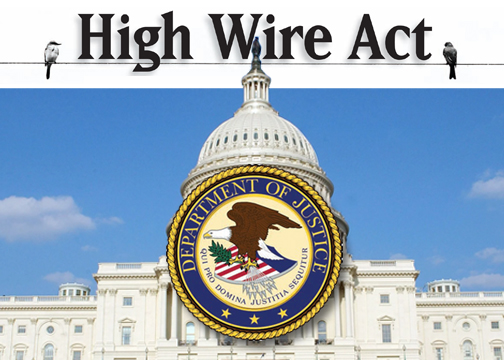 The federal Wire Act of 1961 was championed by then-Attorney General Robert F. Kennedy to clamp down on mob-related bookmaking. In its first iteration, the legislation banned betting across state lines through transmission using wires, the technology of the day.

As the years passed, few thought much about the Wire Act and its implications. Then came the late 1990s, and the introduction of the internet, an all-pervasive form of transmission that, for the most part, knew no boundaries across states or even countries, and didn’t involve wires.

“The Wire Act sprang back into prominence as a tool to prosecute online gambling offenses,” wrote Michelle Minton in a 2014 research paper for the Center for Gaming Research at the University of Nevada, Las Vegas. “However, from the beginning of the Wire Act’s use in the online gambling arena, there has been debate about the act’s scope, including if it can be applied to internet gambling, and most importantly… whether or not its prohibitions extend beyond sports gambling.”

Two separate rulings defined the meaning of the Wire Act in the age of the internet. In 2011, in response to requests from Illinois and New York for clarity on whether the Wire Act prohibited sales of lottery tickets online, the U.S. Department of Justice (DOJ) reaffirmed that it referred to sports gambling only. “Because the lottery proposals do not involve wagering on sporting events or contests,” the DOJ ruled, “the Wire Act does not, in our view, prohibit them.”

That opinion opened the door to the introduction of state-regulated online lotteries and online poker, as well as internet gambling, says C.J. Fisher, a partner and gaming attorney with Fox Rothschild in Atlantic City. “You saw the rise of that in New Jersey,” he says.

“The government’s reinterpretation of the statute strains credulity. The original purpose of the Wire Act was to relate only to sports wagering.”
—C.J. Fisher, Partner, Fox Rothschild LLP

In 2013, New Jersey introduced internet gaming, but the servers that operated the system were based in the state—specifically, in Atlantic City. Using a technology called geofencing, bettors could be traced to the locations where they wagered. If geofencing showed that gamblers were trying to play at a New Jersey online casino while based in Pennsylvania or Connecticut, well, all bets were off.

2013 also saw the launch of online poker in Nevada, then Delaware and New Jersey, and later included a multi-state compact in which the states shared poker players, something that clearly crossed state lines.

In 2018, when the Supreme Court overturned the federal law banning sports betting, the floodgates opened, with New Jersey—the state that brought the suit to begin with—leading the way to institute wagering on sports, including online.

In this case, however, the Wire Act prohibited accepting bets from beyond state borders, which explains why New Yorkers would take a ride to Hoboken to place bets, and then head back across the Hudson.

It was all well and good until January of last year, when the DOJ’s Office of Legal Counsel again stepped in, this time to reverse the 2011 ruling that limited the Wire Act’s use to sports wagers.

“It now extended to all forms of gambling,” Fisher says. The decision raised the ire of online bettors and an emerging industry. Would it kill off the interstate poker compacts between New Jersey, Delaware and Nevada, and stop Pennsylvania from joining in?

In fact, even in-state online betting may be illegal if any of the internet data crosses state boundaries. Just as importantly, the ruling could derail multi-state lotteries such as Powerball and Mega Millions. The prospect led the New Hampshire Lottery Commission to file a lawsuit to stop the DOJ ruling, a decision which will allow the lotteries to keep operating while the litigation is in progress, Fisher says.

The DOJ decision also brought a sharp rebuke and a threat from New Jersey Senate President Stephen Sweeney, who demanded that the body rescind its opinion or the state would take it to court.

“The 2019 opinion, which took 26 pages of tortured analysis of sentence structure and comma placements to determine that the clear language of the Wire Act applied to all forms of gambling, was contrary to the much better-reasoned opinion of the Fifth Circuit and the thorough review of the Department of Justice in 2011,” Sweeney wrote to Deputy Attorney General Rod Rosenstein.

Since New Hampshire filed its legal action first, New Jersey and other states filed an amicus brief with the First Circuit. Whether these states are more than friends of the court depends on the ultimate outcome of the New Hampshire case.

New Hampshire Governor Chris Sununu spoke in support of the lottery commission, saying, “New Hampshire is taking action to protect public education. The opinion issued by DOJ puts millions of dollars of funding at risk, and we have a responsibility to stand up for our students.”

In the case of the New Hampshire Lottery and other lotteries that participate in multi-state games such as Powerball, it’s difficult to understand the DOJ rationale, says Andrew Silver, an associate with Ifrah Law in Washington, D.C.

A federal judge in New Hampshire has answered that for the moment by setting aside the DOJ’s new interpretation in what Silver calls “a well-reasoned ruling. The judge recognized both that the government’s reinterpretation of the statute strains credulity, and that the original purpose of the Wire Act was to relate only to sports wagering.”

That case is currently before the U.S. Court of Appeals for the First Circuit. In the end, Silver thinks the DOJ will lose. “Having now had the opportunity to review the government’s opening appeal brief and the responses filed by the New Hampshire Lottery Commission and its service provider, I’m optimistic that the New Hampshire court’s decision will be upheld on appeal.”

The government’s final brief is due to be submitted later this month, and the case will likely be argued at some point later this year, barring added delays caused by the Covid-19 outbreak, Silver says.

It’s conceivable that whoever does not prevail before the First Circuit could ask the U.S. Supreme Court to take the case, but there’s no guarantee that the high court would accept the challenge, Silver says. “Most typically, the Supreme Court only accepts cases in which multiple federal circuit courts of appeal have issued conflicting opinions (known as a ‘circuit split’). Absent this, the Supreme Court would be less likely to hear an appeal.”

Fisher, too, thinks the DOJ’s reversal opinion will fail and be a win for the gaming industry. “I think ultimately the litigation will conclude favorably,” he says. “That is my hope.”