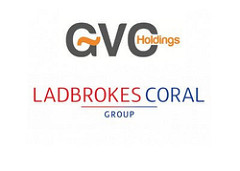 In a deal that has created one of the world’s largest betting companies, GVC Holdings announced it has agreed to purchase gambling group Ladbrokes Coral Plc. for at least £3.2 billion. The official valuation is fluid because of a new regulatory scheme that is still being determined by the British government.

The Ladbrokes name will no longer be attached to a corporate structure, for the first time since it was established in 1902, but will remain a brand under the GVC umbrella, joining a collection of other powerful gambling brands such as Bwin, Sportingbet, PartyPoker and Foxy Bingo.

The deal took nearly a year to put together, and was complicated by the pending new regulations as the government conducts a gambling review and ponders reducing the maximum bets and jackpots at the fixed-odds betting terminal games currently being offered at all British betting shops. The maximum bet now stands at £100, but observers expect that to be cut to between £2 and £50. The final pricing of the purchase will remain unclear until that limit is set.

Just last year, Ladbrokes completed a £2.3 billion merger with the Coral Group, which consists of betting shops and bingo parlors across Great Britain. The merger gives GVC increased access to the U.K. market, in addition to its presence in Germany, Italy and Australia, as well as a possible role in the expansion of iGaming and sports betting in the U.S.

GVC Chairman Lee Feldman and CEO Kenny Alexander will remain in those roles in the new company, with Ladbrokes’ financial director Paul Bowtell taking over as finance chief for GVC.

Prior to completion of the deal, GVC sold its Turkish assets for €150 million to avoid any complications, since most forms of gambling are illegal in Turkey.

Over the past year, shares in both GVC and Ladbrokes Coral have increased nearly 50 percent. On the announcement of the merger, Ladbrokes rose 1 percent and GVC declined by 3 percent.