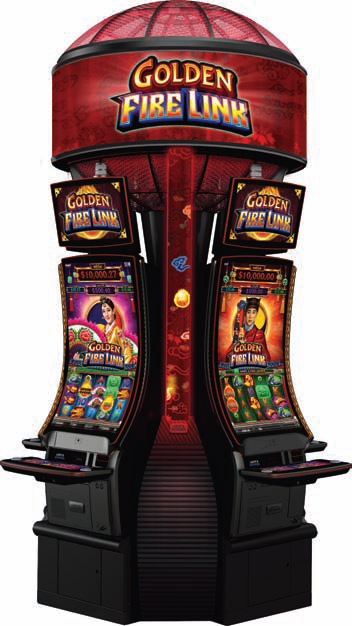 This new game series on L&W’s Kascada cabinets centers around values displayed on “Fireballs” on the reels. The base game is played on a five-by-four reel array, but during the main progressive bonus and free-game event, the reels can expand to eight rows.

The game is available in 10-line, 15-line, 20-line and 50-line versions. Featured base-game titles in the series are Dragon Song and Buchae Blossom.

Fireball symbols result in instant awards of credits or jackpot prizes. During the base game, the Fireballs return from one to 100 times the total bet, or one of the two static jackpots—a $15 Mini or $50 Major. During the free games bonus, Fireballs return up to 20 times the bet, the Minor or the Mini. During the main Golden Fire Link feature, Fireballs are good for up to 100 times the bet or one of the four jackpots—the Minor or Mini, the Major progressive resetting at $500, or the Mega progressive resetting at $10,000.

The Mega also can be won via a line combination of five bells.

Scattered green gem symbols on the three middle reels trigger eight free games, and the reel array can expand during the feature—beginning with five rows, each “Unlock Row” symbol activates another row, up to the maximum eight rows. Fireball symbols return the prize displayed.

Four or more scattered Fireball symbols in the base game trigger the main Golden Fire Link hold-and-re-spin bonus event. The four Fireball symbols remain in place after their value is awarded on an accumulating display. Players are given three free spins, and each time a Fireball lands, the additional bonus is awarded and the spins return to three. The Fireballs also expand the reels one row, up to the maximum eight.

Collecting 24 or more Fireball symbols during the feature unlocks a top bonus wheel, with the chance to win the top progressive prize.