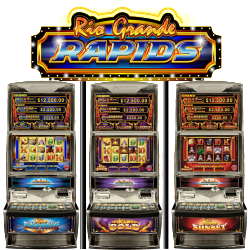 It has been 15 years since gaming industry legend Len Ainsworth, who has been producing slot machines since he founded Aristocrat Leisure Industries in the 1950s, started a new slot manufacturer bearing his name.

Ainsworth is undoubtedly one of the most important figures in the development of the slot industry, a fact recognized in his native Australia the same year he left Aristocrat, when he was one of the 1994 inductees into the Australian casino industry’s Hall of Fame. He was inducted into the American Gaming Association’s Hall of Fame a year later in 1995.

That same year, Ainsworth’s new company hit the ground running in Australia, the same market in which Len Ainsworth pioneered the signature multi-line video style that became a hallmark first of slots by Aristocrat and then by every other slot-maker. Not surprisingly, games from Ainsworth’s new company were groundbreaking as well. The “Ambassador” and “Celebrity” lines of video slots foreshadowed the large, dual-screen formats that most manufacturers now count as standard.

Since establishing its first office in Sydney and gaining a foothold in the giant Australian market—where the company now enjoys a 10 percent market share amid heavy-hitters like Aristocrat, IGT and WMS—Ainsworth’s company has been in expansion mode. The company established offices in New Zealand, South Africa, Europe, South America and Macau (where Ainsworth received the Asia Gaming Visionary Award at this year’s G2E Asia) on its way to establishing a global presence.

Meyer says the company’s strongest U.S. market is Minnesota, where success has been achieved with Ainsworth’s first four-level link progressive, “Players Paradise”—a title he says has been “extremely successful” throughout North America. Ontario is another stellar North American market for the company, with multiple re-orders of games at all four casino properties.

According to Meyer, by the first half of next year, Ainsworth will have a Las Vegas office to accommodate its growing market share in North America. “Following its corporate licensing approval in the state of Nevada at last year’s G2E,” he says, “and the appointment of John Glaser as sales director for North America, Ainsworth is already well under way in adding key U.S. personnel in sales, marketing, product development, compliance and manufacturing to launch its new Vegas facility.”

New Frontiers
The North American growth effort will certainly be helped by a strong showing at G2E, where Ainsworth plans to launch a new series called “GamePlus” along with the advanced A560 range of cabinets.

“Following the recent Australian launch of A560 at the Australian Gaming Expo in August, the industry has been buzzing,” says Meyer, “with slot managers and players tremendously excited by the appeal of both the dual wide-screen A560 and triple wide-screen Super A560 cabinets.” He says the performance of both the new game library and new cabinets has been “nothing short of phenomenal.”

The new game platform has a Quadtronic processor, a high-quality sound system and an ergonomic player interface. The A560 cabinet varieties include a Highboy with a 22-inch screen, a Lowboy with a 19-inch screen, and the triple-screen “Super A560.”

The new formats yield stunning graphics and brightly colored games. Ainsworth will have a full lineup of new titles displayed on the advanced cabinets. Highlights include “Rio Grand Rapids,” a three-level progressive with a multi-level bonus event and free-spin features with frequent re-triggers. The link is being launched with three base games, “Rio Express,” “Rio Gold” and “Rio Sunset.”

Another highlight of Ainsworth’s G2E games will be “Lights Camera Action,” a Hollywood-themed three-level progressive on either the standard A560 or Super A560 triple-screen cabinet. Base games include “Action Packed,” “Hollywood Hype” and “Sweet Dreams,” all featuring stacked wild symbols and frequent free-game re-triggers.

Other game highlights include “Players Paradise,” and the interactive games “Jackpot Zone” and “Rapid Strike.”