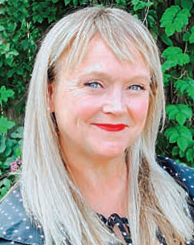 Molly Hart oversees licensing and compliance for Gaming Capital Group LLC, an Oklahoma company that provides financing for the gaming industry. Given her function, you’d think Hart graduated the University of Oklahoma with a degree in business.

Hart received a bachelor of arts in letters in 2010. She studied Roman and Greek history, literature and philosophy, writing and fine arts.

“The letters program taught me to take complicated information and regurgitate it into something easier to understand,” says Hart, who had two sons by the time she entered Oklahoma and a daughter before graduating.

“When I learned of an opportunity to be an employee, I jumped on the chance. I knew how special the company was.”

“I would have taken anything. I just wanted to get my foot in the door to see where it would take me,” she says.

Gaming Capital named Hart licensing and compliance manager in 2018. “It is my responsibility to ensure all necessary gaming licenses are obtained and maintained.”

It’s a team effort, Hart says, one which involves not only her immediate team, but other employees, and various gaming commissions.

With other employees, Hart has helped foster a culture that includes celebrating the seasons, holidays, luncheons, even Festivus for the Rest of us in December. “Whatever it takes to promote culture,” she says.

Another duty Hart relishes is the weekly Molly Message, short, fun editorial pieces she created. Here is a portion of a Molly Message from last month: “I am a long-winded person, but this week I find myself with few words… Seeing and hearing everyone on Saturday enhanced my holiday more than I thought it would, and it was a wonderful reminder that my world is rich with GCG fellowship. We are a rad little bunch.”

Hart dealt with a single obstacle at the beginning of her career. “It was not knowing anything about gaming. I wasn’t a player. But I just dove into the deep end, and found my way one step at a time,” she says.

A trio of women helped Hart achieve her goals. Peggy Chambers, her academic adviser at Oklahoma, showed her that anything was possible. As vice president of corporate compliance and general counsel at Gaming Capital, Lorrie Ann Hellcat Bamford—real name, Hart says—has served as her boss for over five years.

“She helped me grow into a better professional and person, to stand up for what is right.”

Melissa Cox, vice president of marketing and customer relations, was Hart’s boss when she started at Gaming Capital. “I ended up finding who I could be by helping our employees and customers see how special they are, and Melissa was my example. She is one of the most positive people I know.”

The future still remains to be written, says Hart, who prefers to relax with Skip and the kids during down time.

“This industry has shown me that you never know what lies around the corner because it moves so fast,” says Hart, who also likes a good book and binge-worthy television. “If you had asked me five years ago, I never would have guessed where I am today.”

The speed of the gaming industry may not suit everyone looking for a career. “You either love it or hate it. So I say, ‘Buckle up.’ You will find your current in this river, and when you do, you will find the company and energy to be infectious. I have met so many people from so many walks of life, and I feel all the richer because of my career in gaming. We are an awesome bunch.”