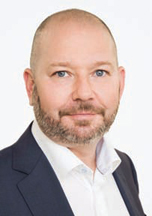 When Kristian Nylén heard that the U.S. Supreme Court was taking up the legalization of sports betting, he wasn’t surprised. He saw it coming.

“There were signs it was about to happen,” he says. “All the daily fantasy sports legislation that was being passed certainly was a clue. The commissioners of many of the pro sports leagues started talking positively about sports betting.”

For Nylén’s company, Kambi, this meant a turning point, and for him personally it would be an affirmation that he was right back in 2009, when he went to the board of Swedish iGaming company Unibet, where he was head of the sports betting department, with a plan.

“I suggested to the board that they consider a spinoff of a B2B business,” he explains. “Sports betting was really starting to explode in Europe with multiple operators and the market beginning to be regulated. The regulations started to become more and more important in Europe at that time. It was not unlike what we’re seeing now in the U.S. and Latin America.”

Kambi was careful, however, as not all markets were regulated or even legal.

“We always worked in markets that were fully regulated or were moving toward regulations with the support of the European Union,” he says. “We tried to avoid places that weren’t regulated but where it might not be strictly illegal. We would wait until the time when that uncertainty was cleared up.”

So a positive Supreme Court decision would mean big business for Kambi outside of Europe, where it had already developed an admirable record as one of the most dependable B2B sports betting services.

“We expected that something big was going to happen once we heard that the Supreme Court would hear the case,” he says. “But of course, we didn’t know exactly what they were going to decide. At that point, however, we decided to go all in in case it did happen.

“We always based our business on the fact that sports betting would be regulated everywhere, but we were surprised about how quickly it happened in the U.S.”

So when the individual states began to legalize sports betting, Kambi was there.

“We were prepared,” Nylén says. “We went live three weeks before anybody else, so we were ready. We had been talking to potential clients well before the decision and had set up agreements ahead of time.”

But in a market where sports betting is not completely understood, some early losses caused some uneasiness. Nylén then offers his advice.

“We try to tell our customers that the day-to-day results, and even the month-to-month results may seem volatile, but when you look at the annual results, things level out. You have to look at the long term to see the viability and profitability of sports betting.”

The different sports in the U.S. also weren’t a big problem for Kambi, says Nylén.

“I’m from Scandinavia, and ice hockey is almost as popular as soccer,” he says. “In Spain and France, basketball is very popular. The NFL is gaining massive popularity in Europe, so these are sports we’ve been offering for more than a decade. Even at the college level, we’ve been involved for a long time. Of course, now we’re increasing those offerings.”

For the foreseeable future, Nylén believes that Kambi’s expertise will be recognized by potential clients in the U.S. and beyond.

“I’m a big proponent of staying in your lane. We’re very good at what we do now, and we’ll stay focused on what we’re doing well. I think we’ll take the position of the leading B2B sports betting provider in the U.S.

“It’s a very exciting time for us.”