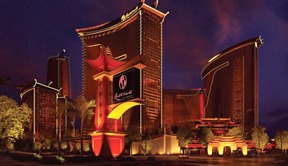 Genting’s ambitions to become a major player in the U.S. gaming market took a giant leap forward last month when the company announced the purchase of Boyd Gaming’s suspended Echelon project on the Las Vegas Strip. Echelon had been shut down since 2007 and was becoming a rusting eyesore on the Strip with bare concrete and iron girders reaching to the sky. Genting will create an American flagship for its brand, Resorts World Las Vegas.

Genting paid approximately $350 million for 87 acres on the north end of the Strip, across from the Riviera Hotel Casino. Combined with the 2014 opening of the SLS Las Vegas Casino Hotel (the former Sahara), the project will slide the balance of power on the Strip further north.

The resort becomes the first major project to be announced in Las Vegas since the 2007 downturn, and marks a renewed faith in the growth of visitation to Las Vegas. While the number of people visiting Las Vegas has returned to 2007 levels, gaming revenues still lag behind. Resorts World Las Vegas will also become the first themed project on the Strip in 15 years, since the completion of Bellagio. The first phase of the project, which includes a 3,500-room resort with a 175,000-square-foot casino, a convention center and a 4,000-seat theater, is estimated to cost at least $2 billion, with some estimates as high as $7 billion for the completed project.

In a highly orchestrated press conference at the Las Vegas offices of architect Paul Steelman, Brian Sandoval, the governor of Nevada, was joined by several county commissioners and, by phone, U.S. Senator Harry Reid, the Senate’s majority leader, in welcoming Genting Chairman and CEO Lim Kok Thay and other company officials to Nevada.

Genting has yet to be licensed in Nevada, but operates the Resorts World New York City racino at Aqueduct Raceway.