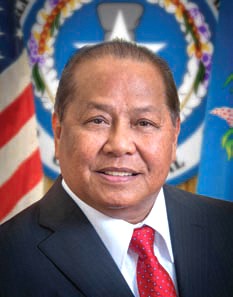 Eloy Songao Inos became acting governor of the Northern Mariana Islands (CNMI) on February 20, 2013, following a four-year term as lieutenant governor of the Islands. Inos was appointed governor following the resignation of his predecessor, and is currently serving out the remainder of the former governor’s term, through this month. He was re-elected in November to another term.

Governor Inos can now also be credited with successfully attracting gaming industry players to a public tender for an integrated resort in Saipan, CNMI’s largest city and a well-established tourist destination. Saipan has historically attracted visitors from Japan and Korea, and also has a rapidly growing tourist base from China. The governor’s administration selected as preferred developer Best Sunshine International to build a multibillion-dollar destination resort in Saipan.

As a new outlet for coveted VIP junket play, the pending development is sure to have the eyes and ears of the industry.

The governor’s vision for and commitment to the CNMI community are the hallmarks of his efforts to establish Saipan as a more substantial tourism and gaming destination. He is a true CNMI local success story, having attended the University of Guam, graduating in May 1981 with a degree in accounting and management along with a minor in public administration. Shortly after graduation, Inos became the director of finance and administration of the Trust Territory of the Pacific Islands (TTPI). In this role, he managed and directed the overall TTPI budget and financial administration, and managed and supervised overall TTPI personnel administration, federal grants management, communications and procurement.

Remaining within the public sector, Inos moved on to be the director of finance for the CNMI government from 1987 to 1994, where he administered and supervised all aspects of CNMI’s financial administration.

After holding his position as director of finance, Inos moved into the private sector as the president of Century Group of Companies, Tan Holdings Corporation. While there, he managed and supervised the operations of Century Insurance Co. Ltd., Century Travel Agency and Century Finance Co. Following this position, Inos became the vice president of international trade and government relations and vice president of business development and special projects before returning to the public sector in 2006.

Asia and industry eyes will be on Inos and Saipan for the foreseeable future. One certainty is that the governor’s legacy will be tied to gaming, an industry he has embraced as the vehicle for economic development and the diversification of the CNMI economy.