Blaine Graboyes, founder and CEO of New York-based GameCo, says the company’s skill-based games aren’t just kid stuff, but can and do appeal to players of all ages. 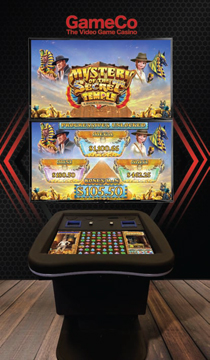 In 2016, when he first pitched video-game gambling to casino operators, Blaine Graboyes had nothing to share but an idea and a storyboard. Even so, the veteran game designer, with clients including DreamWorks, Disney, Sony and Mattel, was invited in, and introduced the first round of skill-based video-game gambling machines (VGMs) in Atlantic City and Connecticut the following year.

While the concept has yet to revolutionize the industry and at least one Atlantic City operator pulled GameCo games from its floor after six months, Graboyes is convinced that day will come, for one simple but compelling reason. By now, several generations of young players are likely to yawn at traditional slots, and even the tried-and-true slot demographic is becoming more demanding in terms of the gaming experience, due to their experience playing online social games.

“Over the last year or two, I’ve seen a really important change in the industry, a recognition that video-game gambling and skill-based games are truly a different category and shouldn’t be held to a strict evaluation of win-per-unit when an operator is looking at their floor average,” he says. “If our games attract new gamers, don’t cannibalize slot revenue and provide incremental revenue to the casino operator, that’s incredibly important.” It may, in fact, be the wave of the future.

“These games absolutely can and do compete around floor average metrics, but even if a GameCo game were doing two times house, which we’ve experienced, it’s still not the right way to evaluate the success of an entirely new category of product which ultimately is designed to appeal to a new audience.”

In conversations with wary operators, he puts it this way: “Which is more finite, your floor space or the market for slot players?”

The answer is always the same.

“Most operators are rightly looking to optimize quarterly earnings,” observes Graboyes, “but they also need to be thinking about three-, five- and 10-year horizons. We’re in an industry where innovation has its own pace. It’s not the same pace as apps or video games or other digital technology, and the work we’re doing now will need a certain gestation period to have the effect that we know it will. So having that support and partnership is critical to companies like GameCo.”

The company’s suite of games includes those based on the popular match-3 and puzzle formats that appeal to players across the spectrum, including today’s slot enthusiasts, he says.

“We’re also making games that appeal to the new generation of casino gamers—sports games, racing games, action games, fighting games. We like to say we give operators the ability to merchandise and program their floor for the customer they have today and the customer they want to have tomorrow.”

At G2E, GameCo will present the newest iterations of high-performance match-3 games: the Egyptian-themed Mystery of the Secret Temple, Star Trek: The Next Generation, and Pop Fish, an “underwater adventure” game.

“What’s great about these games is that they leverage one of the most popular genres in the mobile gaming industry, like Candy Crush and Bejeweled. They’re easy to play, they have a very broad audience, and they feel a lot like a slot machine but are more interactive, giving the player greater agency in the game, as well as a sense of progress and completion, which is very important to gamers.”

The company will also be showcasing updated, higher-velocity versions of Terminator 2 and Steve Aoki’s Neon Dreams.

GameCo’s second booth at G2E will present its new bartop cabinet and a versatile multi-player arena product, which offers two different game-play modes: competition mode, in which up to eight players can participate in a single contest, but single players also can play on their own; and tournament mode, which allows for bracketed tournaments in esports competitions directly on the casino floor.

“One of the questions we’re always asked is, ‘Who’s playing your games?’ and my answer is, ‘Which game?’” says Graboyes. “Someone who plays Mystery of the Secret Temple will probably be over 45 years old on average and probably skew a little female in gender. A game like Soulcalibur, which we’ll be launching as one of the first multi-player arena games, is definitely a younger audience skewing male.

“I love dispelling these generational stereotypes. We are absolutely looking to reach all players.”