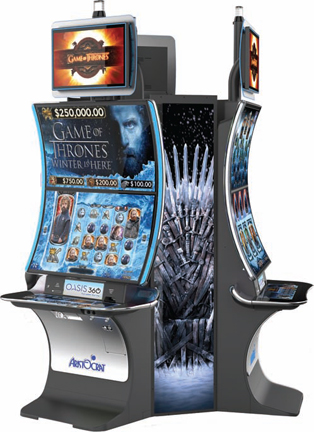 Aristocrat has built on the widely successful Game of Thrones slot franchise within its gaming operations portfolio with Game of Thrones—Winter is Here. Based on the seventh season of the hit HBO TV show, Winter is Here is featured on the ultra-large, cinematic Edge X cabinet.

The base game plays out on a five-by-four array (four rows of symbols per reel), plus a sixth Bonus Reel that applies in the game’s main feature. The game includes a “Beyond the Wall” feature that allows players to take on the White Walker army with a cascading Cash on Reels progression.

Landing a character in this feature awards credit prizes with multipliers up to 12X for consecutive wins. Winter is Here also offers the Night King feature, where Bonus Reels 2-6 contain only credit prizes, multipliers and high-paying royal symbols.

Game of Thrones—Winter is Here is a medium-to-high volatility game available in both MSP and SSP in non-MSP jurisdictions.

On the Edge X, players will have a sense of personalized gaming space packaged with a 27-inch super-high-definition topper and vibrant themed wedges. The ergonomically designed LED display puts out a vibrant, high-contrast picture which, according to the manufacturer, replicates the experience of being in the “Seven Kingdoms” alongside the main characters.