Why the Middle East and North Africa are often gaming-friendly 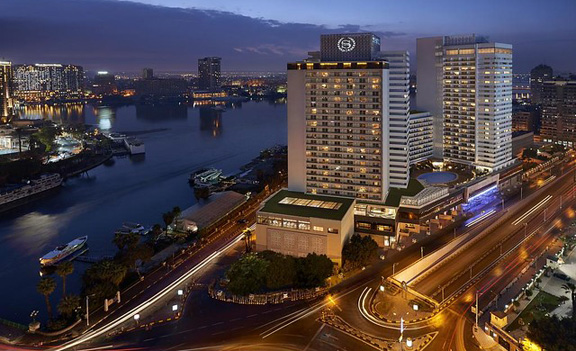 According to the Quran, Muslims are forbidden to gamble. However, there are casinos in countries where Islam is the predominant religion, and there are numerous other countries throughout the world with casinos that focus their marketing strategies on attracting gamers from Muslim-majority countries.

In the 1960s and ’70s, the high-end casinos in London were populated with Arab customers awash with their newly found petrodollars. Millions of pounds sterling were exchanged on a nightly basis. Today, in the London casinos, one will still find some of the largest players from Arab nations rubbing shoulders with Asian players.

Despite all the historical and current troubles in the Middle East and North Africa (MENA), Middle Easterners continue to seek gambling opportunities both within the region and in the West and the Far East, where larger integrated resorts attract the highest-net-worth players from around the world. With such intense investment and development originating from Middle Eastern sovereign wealth funds and other major corporations, especially in the hospitality and leisure sector, the region may be primed to become a major gaming and integrated resort destination.

However, it is important to consider the previous successes and failures of the market, as well as the delicate balance of casino gaming within the culture of any Muslim-majority nation.

In Egypt, the 14 or so casinos in Cairo still do a good business, generating over $200 million in gross gaming revenue (GGR) annually. Casinos are only permitted within five-star hotels, and Egyptian citizens are not supposed to enter the casinos. All players must present their passports at the door to gain entry. However, in the Middle East, many people have dual citizenship, and even Egyptians will show another passport to gain access to casinos. 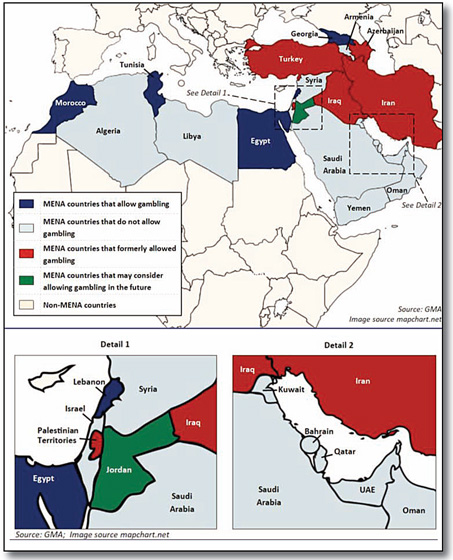 Other quirks are that the casinos have to pay a gaming tax of 50 percent of GGR, and this has to be paid on a daily basis. If the casino loses on any particular night, the loss cannot be netted against casino wins in the following nights for tax purposes. The basis for the gaming tax and the consequent win/loss volatility work against high-action games such as craps and roulette.

Morocco is similar to Egypt in that it allows casino gambling, albeit with a smaller number of casinos than Egypt at only seven, and Moroccan citizens are also not supposed to enter the casino. However, similarly to Egypt, many wealthy Moroccan citizens are holders of two passports. The casinos are all located within five-star hotels and resorts in Marrakech, Agadir, El Jadida and Tangiers. The length of licenses and the gaming tax are negotiable depending on the level of investment made.

Tunisia allows casino gaming but only for foreign visitors. There are currently three casinos in the country. There were more, but many have closed since the downturn in tourism following a terrorist attack in Sousse that targeted foreign tourists in 2015.

Not many people realize that in Lebanon, the Casino du Liban operates in the coastal town of Maameltein, about 20 kilometers north of Beirut. It was originally opened in 1959 and closed in 1986, only to reopen after a $50 million refurbishment in 1996. The casino has more than 60 tables and 600 slot machines, a 1,000-seat showroom, a 600-seat theater, three restaurants, and banqueting for up to 600 people.

The casino’s average annual GGR is approximately $175 million. In 2017, the casino had gross revenues of $150 million, of which 50 percent was paid out in taxes and $80 million was paid out in salaries; the company has over 1,400 employees. 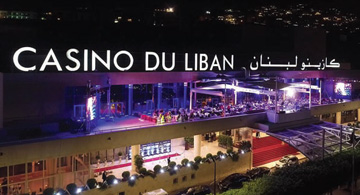 The oldest casino in the Middle East is the Casino du Liban in Lebanon, located just north of Beirut

Casino du Liban is a public company, quoted on the Beirut OTC market. Shares of the company have traded as high as $550 per share but are currently trading at $140 following years of losses. More than half of the shares that are not in the public float are owned by Intra Investment Company, which is owned 35 percent by the Lebanese Central Bank, 10 percent by the Lebanon Ministry of Finance, 4 percent by the Kuwaiti National Bank (which used to own 23 percent but has sold down), and 3 percent by the Kuwaiti government. There appears to be no restriction on Middle Eastern governments owning shares in casino companies, whether domestic or international.

Another Middle Eastern fund that has no difficulty investing in casinos is Dubai World, the sovereign wealth fund of the government of Dubai. In 2007, Dubai World invested $5.2 billion in what was then known as MGM Mirage, in order to bail out the company due to the strain of developing CityCenter in Las Vegas.

Other non-Middle Eastern countries that attract customers from these regions include the approximately 25 in Northern Cyprus; Melco’s City of Dreams resort under construction in Cyprus; the five casinos in Batumi, Georgia, which is just a short drive away from the Turkish border; the casinos in Tbilisi, Georgia, which are widely popular with guests from Turkey, Azerbaijan, Israel and Iran; and many other countries in the region.

In addition to those listed above, London casinos still attract some of the highest-net-worth players in the region. One would need only to walk into a London club to see who these big players are. In addition to the few Chinese players in the region who will always find their way to the casino, the casinos’ largest whales tend to be of the Middle Eastern persuasion.

The first casino opened in Turkey in 1990, and there was little established in terms of regulation. When casinos were eventually banned in Turkey, it wasn’t the number of casinos in the country, but rather the ubiquity of casino-style slot machines in bars and restaurants throughout the country that led former President Süleyman Demirel to ban all forms of gaming except the lottery. Today, any Turk wishing to gamble can simply hop on a plane to Northern Cyprus (whose official name is the Turkish Republic of Northern Cyprus) or Georgia.

There was a casino in Jericho, a Palestinian city in the West Bank, with 120 tables and more than 300 slot machines. It was permitted to open by Yasir Arafat in 1998 in the hope that it would bring a much-needed economic boost to the Palestinian National Authority, despite the fact that many of the residents of the territory are Muslims and do not agree with gambling.

The intent was for Israelis to gamble in the casino because casino gambling was, and is not currently, allowed in Israel. The casino was a commercial success for the two years it operated, with gaming revenues estimated at roughly $160 million per year. Unfortunately, rioting and a subsequent travel ban on Israelis visiting the territory put a halt to the casino enterprise.

Similarly, Azerbaijan formerly allowed casinos, although a scandal involving the current president and gambling overseas led him to close the casinos as a part of his moral crusade against gambling.

During the reign of Shah Reza Pahlavi in Iran, there were casinos in Isfahan and Tehran, as well as one on the island of Kis. The casinos were purported to be owned in part by the Pahlavi family. They were operated by British companies, including Ladbrokes, and they were extremely popular and highly profitable with a high volume of play from wealthy Iranians and others from countries nearby. The casinos closed when the Shah was overthrown in the Islamic Revolution of 1978.

Evaluating the MENA Gaming Market as a Whole

Is this a billion-dollar market? Yes. However, not all of the money is filtered through the aforementioned casinos. Much of it finds its way over to larger casino resorts in Asian countries, such as Genting Highlands in Malaysia. In Malaysia, while it is illegal for Malay Muslims to gamble, there is no particular gambling ban for Muslims from other countries. When walking on the casino floor at Genting, while the majority of players are coming from China and elsewhere in Asia, the presence of gamers from the Middle East is staggering.

While the Middle East does generate substantial levels of gaming play, it comes at a price. Deep discounts on losses are to be expected. While loss discounts of 20 percent to 30 percent are expected, some casinos in North Cyprus will discount players’ losses by as much as 50 percent. The game of choice is Russian Poker, a house-banked version of five-card poker. While the hold percentage of this game can reach upwards of 35 percent, which makes large discounts on play more palatable to the operators, larger players will often negotiate the rules with the casinos prior to visiting. By adjusting the number of hands that one can play simultaneously, and through other unique rule changes, the players can lower the house’s advantage.

Many of the guests who frequent these casinos arrive through a junket program. With these programs, the casinos often need to arrange for the players to receive discounted or free hotel rooms and food, and often some amount of free play or direct bet in the casino. In certain circumstances, the operator will share a percentage of the total win from the group with the junket operator. However, operators must be very careful in selecting the junkets with whom they partner, as the players arriving to Middle Eastern casinos via junkets are not usually high worth. Very often, the average junket player might only lose $800, against which the casino had $400 of promotional allowances.

While there can be high levels of risk taken on by the operators based on considerations for promotional allowances and potential adjustments to the rules of the game, these casinos can make substantial amounts of revenue. Those casinos that are successful can generate upwards of $4,000 per table per day. While slots are not as popular, they are growing and beginning to attract more players.

Despite the Sharia law mandate prohibiting Muslims from gambling, gamers from the Middle East account for a sizeable share of gaming dollars spent throughout the world. However, as most of these dollars are lost to casinos outside of the Middle East, a significant challenge remains in ensuring that these revenues are kept closer to home.

While many Muslim-majority countries chose to offer casino gaming only to foreigners or non-Muslim visitors, the performance of these casinos is often hindered by high tax rates and impractical regulatory barriers. The ideal Middle Eastern gaming market would enable casino operators to achieve sustainable gaming revenues with a moderate tax rate that yields the optimal amount of revenue to the host nation, all while respecting the rich culture and norms of Muslim-majority nations and ensuring that casinos and integrated resorts are welcomed within local communities, an essential aspect of any successful gaming operation.