Taiwan's Kinmen island group could be Asia's next gaming stronghold 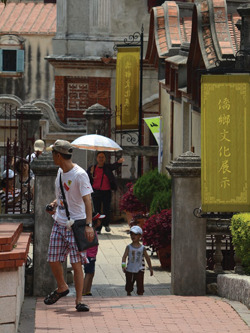 Kinmen is back in the crosshairs, but not by the People’s Republic of China artillery gunners this time as it was back in the 1950s, when it was known by its dialect pronunciation Quemoy. Instead, Kinmen, a group of tiny Taiwan-administered islands located, preposterously, at the mouth of the most important river of China’s populous Fujian Province, is now being targeting by global gambling interests.

Their lobbyists, operating from Taiwan’s commercial capital, Taipei, a 50-minute flight away, say that if a casino resort is allowed on Kinmen it could prove a bigger draw for Chinese gamblers than Macau or Singapore.

International law offices flanking Taipei’s Dunhua Road boast of expertise these days in the legal needs of casino operators. So far, one of the most visible proponents of legalizing gambling is Professor Paul Hsu, chairman and CEO of Phycos International, Ltd., an expert in cross-border transactions as well as a holder of concurrent adjunct professorships at Taiwan’s most prestigious schools, National Chengchi University and National Taiwan University.

Also of note is Dr. George Lin, managing partner of Lin & Partners, which recently completed a draft of a gaming law commissioned by Taiwan’s Ministry of Transportation of Communications (MOTC). (Neither agreed to requests for interviews.)

Hsu and Lin shared a podium at the International Conference on the Gaming Act of Taiwan held in Taipei on June 3. And they appeared together again on July 6 at a special luncheon of the European Chamber of Commerce Taipei, titled “From Military Front Line to Tourist Heaven” and subtitled “Transforming Kinmen from a Military Stronghold into a Gaming Hotspot.” According to talks at this event, the Taiwan Gaming Act is expected to pass by 2012 and casino operations could start as early as 2016.

Yet a victory lap is premature. Neither of these men—nor anyone else in Taipei or Taiwan—has a say in the matter. The decision of whether or not to allow a casino resort on Kinmen must be put to a referendum; and, when or if that happens, only Kinmen residents will cast votes.

To take a firsthand look, this writer spent 10 days on Kinmen this past July. The most indelible experience was standing on its western beaches and marveling at how close China is. At night, Xiamen’s skyline bathed dark, starlit Kinmen in a gaudy, neon glow. Kinmen County includes 12 islands, but nearly all residents live on the two largest—Big and Little Kinmen.

Martial law was lifted in 1992 (versus 1987 in Taiwan), and since then the number of soldiers has dwindled from 100,000 to the low thousands. Some forts are now museums, as are the massive defense tunnels.

Times change. In one tunnel, a classical music concert is held each year. Supposedly 80,000 people live in Kinmen County, but many work in Taiwan and return only for elections. Little Kinmen has one 7-Eleven, the only 24-hour business on the island. Beach access is limited, as landmines are still being removed. On Big Kinmen, its main port, Shueitou, is tiny but busy with ferries from Xiamen.

On one day, boatload after boatload of Chinese college basketball players were arriving for a tournament. Big Kinmen, of course, beats Little Kinmen in its 7-Eleven count, but forget about Big Macs or other Western delicacies. Ditto, fancy hotels. I stayed in a restored Ching Dynasty merchant’s home for US$50 a night. Kinmen is laid back, its people hospitable.

One afternoon, I cold-called the County Government and asked to talk to someone about Kinmen’s plans for a casino. Graciously, a call was made on my behalf, and the next morning I was sitting at the office of Tsang-Chiang Chen, Ph.D., councilor of Kinmen County Council.

Chen is the man spearheading the push for a referendum on casinos in Kinmen. He is a Kinmen native, a professor at National Quemoy University, and politically an odd bird.

In fact, Chen is the first Democratic Progressive Party (DPP) councilor in Kinmen. The other 18 councilors are all Kuomintang (KMT). Kinmen’s steadfast allegiance to the KMT stems from its military past, and the belief that the DPP would like nothing better than to return the offshore islands to China.

“I initiated the petition because I believe referendums are an important tool in the democratic process,” says Chen.

But democracy works in strange ways. Chen turned in his petition on August 27, 2009, and two years later, it is still gathering dust at the Kinmen County Election Commission.

To qualify, his petition needed 354 signatures, based on the Referendum Act requirement of 0.5 percent of eligible voters in the most recent election, and 460 were collected in a mere three days.

In contrast, the election commission has convened seven times to review the petition. During the first two meetings, there was quibbling over how the referendum question would be worded on the ballot. In five subsequent meetings, the vote was delayed each time due to insufficient attendance.

“Politicians are ostriches,” Chen says. “They don’t want to touch this. They will lose votes.”

Yet Chen is optimistic that the referendum will be scheduled, put to a vote and passed. “If you look at who is against gambling, it is the people at the top,” he says. “But a referendum would be decided by the people at the bottom—laborers, taxi drivers, the everyday people. What they see is jobs.”

Typically, debates over the legalization of gambling weigh two opposing viewpoints—one that anticipates an economic upside versus a second that fears a moral downside. “People say they oppose gambling because it will bring sex and violence, but I’m not so sure,” said Chen.

The final version of the Taiwan Gaming Act, when passed, is expected to include regulations designed to prevent that. Chen envisions the casino in Kinmen’s future to be akin to Resorts World Sentosa in Singapore. “I’ve been to Macau and Las Vegas, and they are great locations,” he said. “They’re not just for gambling. They are leisure resorts.”

But mega-resorts also need international airports, which is something that Kinmen, due to its size, will never have.

“Will Europeans or Americans come to gamble at Kinmen?” Chen asks rhetorically. “Will the Japanese? No, that is impossible. The guests at a Kinmen casino resort would come from China.”

And that is why Chen’s role in this process is so unusual. His political party, the DPP, is against the legalization of casinos on Taiwan’s outer islands and, in general, against anything promoting stronger ties between Taiwan and China.

The DPP was founded in 1986, and before that was an illegal political movement. Early members were mostly native Taiwanese, descendants of the Fukinese emigrants who settled in Taiwan during the late Ming and subsequent Ching Dynasties. Seven million of them lived on Taiwan when Generalissimo Chiang Kai-shek along with 1.5 million mainlanders, mostly poor soldiers but including some of Chiang’s fabulously wealthy supporters, arrived in the late 1940s. Chiang’s Nationalists maintained one-party authoritarian rule until the lifting of martial law in 1987.

Today, Taiwan has 23.2 million people, and the KMT has had to learn to share power with the DPP.

The DPP is isolationist, and its first elected president, Chen Shui-bian, during an eight-year term from 2000 to 2008, did everything feasible to distance Taiwan from China. Now, the KMT has returned to power with the election of President Ma Ying-jeou in 2008, and is vigorously attempting to expand relations with China. Offshore casinos are a small part of that.

Nearby, just two kilometers away at low tide, China, with its 1.3 billion people, would no doubt love to pull Kinmen into its orbit, if only for the potent symbolism.

Kinmen has been a thorn in China’s side for centuries, first due to pirates—in particular, Ming loyalist Koxinga, who wreaked havoc along the China coast through the early Ching, and most recently, due to dug-in Nationalist troops with the U.S. Seventh Fleet patrolling the Taiwan Strait as backstop.

As they say… it’s complicated.

2009 marked a turning point for international gaming interests struggling to get a foothold on Taiwan since as early as 1988.

Taking office on May 20, 2008, President Ma Ying-jeou made good on his campaign promise to bring casinos to the outer islands. He directed the Council for Development and Planning to conduct a feasibility plan.

He pushed for the Executive Yuan to amend the Offshore Islands Development Act to allow the legalization of casinos, where approved by referendum, and that amendment became law in January 2009. Next, the Executive Yuan tasked the MOTC, which includes the Taiwan Tourism Bureau, to draft a Gaming Act that will regulate it all. That chore was commissioned to Lin & Partners in May 2010.

Momentum is building in Taipei. For the KMT, offshore gambling is clearly a policy objective. If free to openly pursue this goal, the party would make offshore casinos a reality in a few short years.

But Taiwan’s politicians and bureaucrats also want to protect themselves from electoral blowback. Luckily for them, national politicians can rely on the referendum process—which places the onus of supporting gambling on the tiny island’s governments—to shield them from responsibility.

This makes predicting the debut of the casinos a tad iffy. Case in point: Pro-gambling interests failed miserably when the first binding referendum, as stipulated under the newly amended Offshore Islands Development Act, was held on September 26, 2009 in Penghu.

Penghu, along with Matsu, are the other “outer islands.” Unlike Kinmen and Matsu—both Cold War fortresses a stone’s throw from China—Penghu is an archipelago of small islands much closer to Taiwan. In the late 1990s, all suffered faltering economies. For Kinmen and Matsu, the cause was the withdrawal of troops. Penghu’s problems, in contrast, stemmed from the collapse of its fishing and agriculture, and the loss of Taiwanese tourists who had discovered more glamorous international destinations.

The Offshore Islands Development Act, passed March 21, 2000, was an attempt to address these challenges by turning the offshore islands, now dubbed the Three Mini Links, into stepping stones for formerly banned travel and trade between Taiwan and China.

When debating its passage, legislators wrangled over whether or not to include casino development in the law, but ultimately it was rejected as too controversial. Even so, Penghu became a cause celebre. In the early 2000s, Taiwan’s leading newspapers ran opinion polls. On Penghu, pro-gambling business groups held impromptu referendums, prematurely as the Referendum Act had yet to be passed, and flogged favorable results to legislatures.

International gambling magnates toured Penghu, and bought real estate. Land prices skyrocketed. A Taiwan developer with interests on Penghu was kidnapped and murdered. Without a Referendum Law, a referendum could not be held.

Hilariously, expressing the frustrations of gambling advocates thwarted in their efforts to legalize their industry, a Penghu councilor threatened to petition for a referendum on Penghu seceding from Taiwan. But, in Taipei, national politicians dawdled. In 2004, a presidential election was under way, in which DPP President Chen Shui-bian defended his office against KMT hopeful Lien Chan. Discussion of gambling was avoided.

For gambling advocates, the result was a slap in the face. The September 26, 2009 referendum in Penghu rejected casino resorts, with 56.4 percent of voters against their legalization and 43.6 percent of voters for it. Only 42.2 percent of Penghu’s 73,651 voters turned out.

Three years would have to pass, until 2012, before another referendum can be held on Penghu. That shifted attention to Kinmen, where Councilor Chen had petitioned for a referendum earlier that year.

Chen, speaking of the debacle on Penghu, says, “Gambling advocates were overly optimistic, and didn’t expect strong opposition from the DPP. But that is what happened.” He estimates that Penghu’s voting base is split roughly 40/60, DPP versus KMT.

In Kinmen, a referendum on casinos will face little opposition from the DPP. The party is virtually non-existent on the island.

Kinmen voters, if casting ballots according to KMT wishes, would give casino resorts a green light. But this sure win also gives Kinmen leverage in extracting concessions to sweeten the deal, and only time will tell what they see as a fair.