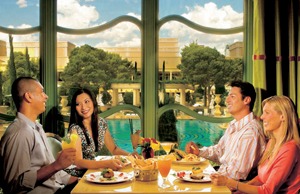 Not the most catchy of phrases, but an accurate one: the notion of a casino resort that is more than a profit-generating casino floor surrounded by ancillary—and money-losing—amenities.

Adelson may have named them, but Steve Wynn invented them. Until 1989, with the opening of his Mirage, the idea that a casino resort would be “integrated” with other money-making operations was largely heretical. Sure, many casinos had rooms, but those were just “dormitories” for gamblers, given free to mid- and high-level players, and used as lures with $19 room rates for the masses. We had food and beverage outlets—especially buffets—but again, they were oriented around the loss-leader 99-cent shrimp cocktail and inexpensive, mediocre buffets.

But the Mirage, and the two dozen Strip megaresorts that followed, demonstrated that gaming is just one part of the profitability mix. With A-level showrooms regularly charging $100-plus per seat, hundreds of restaurants that can easily cost $100 per person, and weekend room rates that, at times, reach $300, $400 or even $500, many Strip operations now generate as much—if not more—profit from non-gaming sources.

More recently, this shift toward world-class amenities—and non-gaming profits—has shifted off-Strip. Whether as close as 10 miles away at Station’s billion-dollar Red Rock casino, or on the opposite coast at Atlantic City’s new Revel, properties across the U.S. and the world are spending more and more of their capital budgets, and granting larger and larger shares of their overall square footage, to non-gaming activities.

To some degree, this is the natural evolution that we should—and are—seeing, over time, in every gaming market. Gaming in every market tends to evolve through three generations. The first is a gold rush, where entrepreneurs are simply trying to be first to market, attempting to grab new and restricted markets. Capital isn’t that important—simply getting open is. Think about the “old Vegas” properties, or a non-Borgata Atlantic City, or the traditional riverboat. When you’re the only game in town, how nice do you have to be? And when you can now offer legal gambling, perhaps for the first time, why bother with lots of capital on other items?

It is only once competition has come, either from many casinos in a given market, or from legalization in another, that casinos shift their focus to the second generation—the development of grandiose, amenity-laden resorts. They have to, because at the end of the day, the casinos themselves are commodities.

We all sell the same table games and slot machines. We don’t actually manufacture our own product (as opposed to a high-end retailer like Chanel or Louis Vuitton, who not only retails, but also manufactures). It is what happens around the casino where we can differentiate ourselves. And while all those fancy rooms and amenities help attract gamblers, and thus maintain or increase market share, they also broaden the appeal of traditional casinos to reach non-gamblers.

Consider me almost 15 years ago, when I was a childless, young professional living outside of Boston. Back then, I loved coming to Las Vegas. I’d easily drop $300 a night for four nights at one of the top properties, buy two $100 tickets to a show on each of three nights, spend at least $500 in the spa, and at least $200 per day on food. Over $3,000. Total spent in the casino? Zero.

As more and more facility-driven properties open, markets enter the third, and final, phase—that of marketing. Everyone has a nice facility, so we have to be smarter about how to use data to outperform. Sophisticated operators look at gaming volumes, customer distance and hotel yield as metrics to determine the appropriate marketing strategy.

But what about marketing to the 1998-era Randy Fine, or the tens of millions of other customers who may eat in our restaurants and pay cash for our rooms, but are casual to non-existent gamblers?

As far as I can tell, most in our industry, including those who could use it the most—the Las Vegas Strip properties—are stuck in the first generation. Our loyalty programs struggle to incorporate non-gaming spend, and when was the last time you heard of a direct mail program built around non-gaming value?

Ever since I was involved in developing Harrah’s Total Rewards back in 2002 and 2003, I’ve been intrigued by the idea of advancing loyalty marketing based on what we at the Fine Point Group call total customer value—not just the value from slots and tables, but every facet of the potential spending experience. Back in 2003, Harrah’s pioneered the notion of developing a single point bucket where you could earn points for both slots and tables.

Certainly, the rules were not the same—a dollar wagered in the slot machine is much more profitable than a dollar wagered at blackjack—but we were able to design appropriate matrices and customer-facing communication to explain to customers how they would earn both one point while playing slots and another while playing tables. Once they had those points, all points were equal—irrespective of how they were earned. We decided not to bother with non-gaming revenue streams because, at the time, Harrah’s was a collection of first-generation facilities. No one would ever confuse Harrah’s Las Vegas (even today) with an integrated resort—it remains largely filled with comped customers from middle markets. Today, having acquired the far more non-gaming-oriented Caesars properties more than five years ago, a “total customer value” approach is a no-brainer.

So why would Harrah’s, which has the reputation for setting the bar in casino marketing innovation, and the rest of the industry, let alone the major Las Vegas operators, struggle to shift their “players clubs” to be “patrons clubs?” Let me start with one misguided notion—technology. This is the oft-given explanation. Our marketing systems are so gaming-centric they struggle to incorporate non-gaming data.

There are three primary reasons: cultural, legal, and most importantly, mathematical.

Having been in this business for a decade, I’ve enjoyed working with more than 200 properties in 21 states and almost every Canadian province. With few exceptions, I’m always surprised at how siloed the business is. Food and beverage operates in its own world, focused on its own P&L. This despite the fact that in most operations, that P&L is heavily subsidized by casino comps. In some companies, the hotel department would rather take a $150 cash-paying customer than give a $1,000 gambler a comp (and get the internally set comp rate on their P&L). And when you get to retail or entertainment? These tend to be run by specialists who may not have much involvement at all in the rest of the “integrated” resort.

Frankly, it is odd since amenities for so long have been the money-losing stepchildren of the casino world, but perhaps it continues because “hotel people” move not within gaming organizations, but to other hotel positions with other gaming (or hotel) companies. Getting these varied functions to put their balkanized interests aside, and focus on developing a marketing program that maximizes total customer value—even if in their little silo they get hurt—is a real challenge.

To be clear, this balkanization challenge isn’t just one that affects different revenue departments. Anytime we’ve developed a loyalty program for a multi-property operator, there are struggles between the interests of each property. One size doesn’t fit all, and this is true whether you are talking about Las Vegas and riverboat properties owned by the same company, or a hotel and gaming department within a single facility.

The second challenge, and the one that is generally unique to the non-gaming amenity equation, is a legal one. The “integrated resort” model implies that in one amazing location, consumers can meet all of their vacation needs—from a fabulous room to a relaxing massage, to world-class food, and of course, a little gambling. As implemented, however, most operators have “third-partied” at least some part of their resort.

It may be the gift shop, or it could be virtually everything that isn’t hotel or casino, but most casinos have third parties who lease and operate various parts of that multi-business experience. Compelling those third parties to participate in a total customer value-driven loyalty program, particularly if it includes “points” that have hard expense, can be tough. But customers aren’t interested in unraveling which of your restaurants you own, and which you’ve third-partied. To them, if it is in your building and you are offering a non-gaming loyalty program, it had better be included.

But the third challenge is the one I think has gotten operators most tangled up, and that challenge is mathematics. The fact is converting slot play or even table play to some kind of point metric is relatively straightforward. Someone, at some point, created a unifying metric to value all gaming play—theoretical—and then gave us the relevant specifications on each machine so that we could calculate it. On non-gaming revenue streams, we have no such luck.

For example, imagine a casino that only has two revenue-generators, a casino and a (casino-owned) restaurant. Each slot machine is equivalent to a menu item, except with modern slot tracking, we know exactly how many of the items we sell, and exactly what our expected profit per item would be. The restaurant side is a bit more challenging. Our system certainly can track how much each check is for, but how much money do we make on each bill? A $100 check spent mostly on food has a much different profit level than one spent mostly on beverage. So how do we calculate the “theo” on each food bill?

How about hotel? Hotel works differently than food and beverage, or gaming, for that matter. Typically, there is a fixed cost to turn a room, and any rate above that is profit. So applying a “profit percentage,” as we do in gaming, wouldn’t yield a true figure.

Add in retail—with multiple shops, price points and brands—and entertainment and nightclubs and on and on, and you can see how executives, grappling with the cultural and legal barriers as well, throw up their hands and forget it.

As much as I may not like it, loyalty marketing isn’t sexy—building some new amenity is, and with all these challenges, you can see why people start working on the new Ferris wheel as opposed to optimizing what they already have.

But like just about anything, these challenges are solvable. And not just in theory. We at FPG have designed a full total customer value system that works by focusing on, and overcoming, all three of these issues.

To combat the cultural issues, we make it clear that a silo mentality is no longer acceptable within the organization. This change is not hassle-free—no change ever is—but obliterating the silo mentality pays benefits far beyond improved marketing.

On the legal side, we go through the time-consuming and difficult process of meeting multiple times with each stakeholder and explaining why the system, as designed, would be a net positive for them. At the end of the day, the casino may have to pick up the marketing expenses associated with their participation, but we are able to get all the necessary data from each lessee. To the customer, the program is seamless.

But the mathematical side is where we get to have the most fun, digging deep into each revenue center’s business and creating a robust model and algorithm to calculate a true “theo” for each purchase a customer makes, irrespective of outlet. We can add those together with gaming theo, and presto, have a total customer value from which we can market.

But that’s just the beginning. Once we have this data, what can we do with it beyond just a points program? Let’s save that topic for another article.