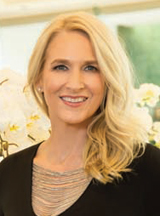 As a country girl from rural Iowa, Cami Christensen loved to travel, and especially enjoyed staying in hotels.

“There was something so magical about going to a new place and checking in—it seemed so glamorous,” she says. “I’d go through all the drawers and steal the soap and stationery.”

Those early experiences (and watching TV soap operas like Hotel and Dynasty) ignited a “little spark” that led Christensen to a career in hospitality. Last October, she reached a pinnacle of the profession when she was named president and general manager of one of the Las Vegas Strip’s most iconic resorts—the Westgate.

Founded as the International and later renowned as the Las Vegas Hilton, the 65-acre property was the onetime main stage for superstars like Elvis, Liberace and Wayne Newton and is now the resident home of Barry Manilow.

Christensen’s appointment makes her one of the first female presidents of a Strip resort. She says she couldn’t have achieved it without the support of her “family”—the rank-and-file who have worked alongside her since 2001, when she started at the Hilton as assistant hotel manager. “Without them,” she says of her co-workers, “I wouldn’t be here. Without their success, there is no success for this property.”

“It’s the thrill of creating an experience for guests on vacation, then adding the casino element to it,” she says. “There’s the noise of the slot machines and the excitement when people are winning at a craps game. When you go to our Superbook on Sunday, it’s so crowded you can barely walk, and the whole crowd is cheering.”

She takes the reins at an important time for the property, which will mark its 50th birthday this year. Acquired by Westgate Resorts Ltd. in 2014, it’s undergoing a major renovation ($150 million and counting); Westgate founder and CEO David Siegel “made a commitment that every bit of the property would be touched,” says Christensen, including 950 hotel rooms, two additional hotel towers, restaurants and the Superbook. “It’s exciting. I’m so lucky to be at the helm.”

Over more than 17 years onsite, Christensen has tried her hand at numerous jobs, hoping to understand the many moving parts that make a 3,000-room resort run. That willingness to pitch in not only endeared her to the rank-and-file, it’s given Christensen a deep understanding of their challenges and created an unbreakable bond.

“Parking cars in the middle of summer. Making beds all day. It gives you an appreciation that, ‘Wow this isn’t an easy job.’ Early on, I realized if I don’t care about that person emptying the trash, I could never be successful here. It’s the front line that counts—they’re the ones who make it or break it.”

Expect a big birthday bash in 2019, with the whole family on hand.