Electronic table games have evolved as a lower-limit, non-intimidating version of tables—often with slot-style bonuses 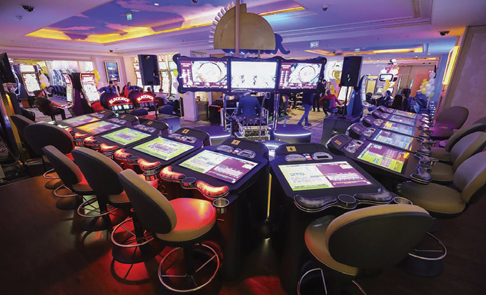 Electronic table games have exceeded the industry faith placed in them several years ago.

ETGs have vaulted from floor-saving devices spiking play at all hours and removing intimidation from novice players to an expression of gaming creativity. They are not only smaller versions of real games, but provide bonus, wild-card and graphically pleasing elements matching the evolution of player preferences.

When launching this novel fleet several years ago, vendors and operators believed the industry couldn’t lose. Not only has it not lost, but the industry is winning, fairly big.

Slot supplier International Game Technology has been a player in the ETG segment since 2016, according to Brandon Bruno, the company’s director of electronic table games. That’s when the company  had its first ETG deployment in Pennsylvania.

Since then, IGT has continued to innovate across ETG content, hardware and merchandising.

“ETGs became a major focal point for operators because they help address aspects of widespread casino staffing issues as well as social distancing considerations,” Bruno indicates. “Traditional live table games require a disproportionately large number of employees to operate even the smallest tables pit. ETGs can operate unstaffed through automated or virtual games, or with significantly fewer employees in a live dealer setting.

“While most operators’ live tables businesses have returned to pre-Covid-19 levels, the majority of operators have elected to retain ETGs on their floors as a great value-add to their existing game mix.”

One of them is “Concurrent.” This offering enables players to enjoy a variety of games simultaneously and with various bet configurations. Concurrent play can increase the velocity of wagers, elevate coin-in, and ultimately lead to a higher degree of player satisfaction. In terms of hardware, IGT offers highly versatile ETG terminals than can be deployed in a variety of configurations.

The product has updated graphics, user interface screens and side bet options to give players a new look and feel. Terminals can be placed in a variety of configurations in stand-alone, bank, circle, arc and stadium layouts, ensuring maximum versatility. New side bets create a more dynamic player experience while increasing time on device and improving house edge.

ETG side bets offer a potpourri of wagering options, both on player and dealer hands, with varied bonus structures.

Lucky Lucky, Upcard Stud and Dealer’s Bonus wagers either combine the hands of the dealer and players together or focus on the dealer’s hand alone.

Bruno anticipates significant opportunity for global ETG expansion. In North America, player adoption has been steady, he says, but operators are still embracing and introducing ETGs at an unprecedented rate. 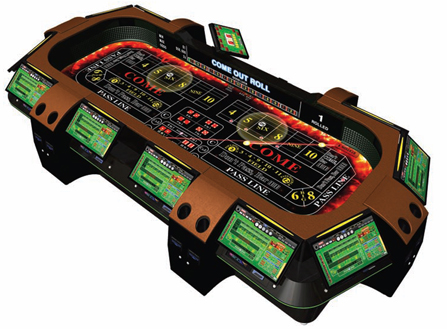 Aruze entered the ETG space in 2009, and has played a leading role in the ascent of this industry sector according to Rob Ziems, president of Aruze Gaming America.

“ETGs are a growing market; they have been around for roughly 20 years and have experienced various levels of success and adoption over the years,” says Ziems. “Shoot to Win Craps really started to change the adoption rate of ETGs because it combined player interaction with technology to create a new yet familiar experience. Aruze calls this ‘Activ-Play,’ where current technology is leveraged to create new experiences.”

Shoot to Win Craps places player stations around a central air chamber which the shooter uses to roll oversized dice. While that product has achieved much success at high-profile casinos such as the Venetian, Aruze followed it up with Roll to Win Craps, a semi-automated unit presented as an actual table with LED backing, where players actually roll the dice.

Roll to Win can be operated with a single dealer (a fully automated version is also available) and offers chip-free and error-free operation. The game simulates live-table game play with dynamic interactive graphics and a side bet that awards a jackpot on a hot shooter’s streak.

The result is a beautiful, crisp, hyper-realistic 3D visual experience that melds the appeal of a traditional roulette wheel with vibrant graphics that significantly enhance a gaming experience that is punctuated by a variety of changing game scenes and interactive graphics that track the spinning physical ball, according to Ziems.

The game play is more exciting with expanded bet options that now include “Box Bets,” he adds.

“Players desire crisp, modern technology to interact in their playing experience. A fuzzy video screen will turn people away. ETGs and all games need to provide compelling aesthetics and engaging game play.”

Blitzing Into the Market

Jackpot Digital has been on a roll.

Last month, it announced a licensing agreement with Buffalo Bill’s Casino Resort, located in Primm, Nevada, to install two Jackpot Blitz ETGs. And there is more to come, according to Mathieu McDonald, head of investor relations and business development for Jackpot Digital. 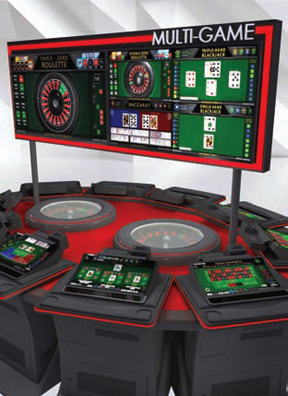 “Operators have expressed their desire for ticket-in/ticket-out funding and full integration with their casino management system, and we have heard them loud and clear, which is why we have recently introduced our next-generation Jackpot Blitz,” he says.

“This is allowing us to serve a much larger segment of the marketplace, and the demand is definitely there. The ongoing labor shortage, combined with difficulty in finding or retaining experienced dealers, means there is growing demand for dealer-less platforms like Jackpot Blitz.”

McDonald says Jackpot Digital has been in the ETG space since 2015, when it acquired the assets of PokerTek, a major player in the dealer-less poker arena. He indicates that the company is proud of the work it has done to evolve the product from the “1980s cellphone” technology people saw back then, into the “latest Apple iPhone” customers see today in the Jackpot Blitz poker ETG.

“Feedback from operators has been overwhelmingly positive on the level of action, engagement and entertainment provided for casino guests,” McDonald says. “Poker players absolutely love the action on Jackpot Blitz ETGs.”

McDonald says the game’s versatility has been a hit with players.

“When players sit down to play Jackpot Blitz and see the cards bending on the touchscreen for the very first time, the reaction is almost universally ‘Wow!’ Jackpot Blitz also offers several side-bet and min-game options, allowing players to multitask by playing blackjack, baccarat, video poker or ‘Bet The Flop’ right at their seat while being engaged in a hand of poker.

“This really brings players the action they are seeking and allows casinos to offer guests the chance to enjoy card games at a whole new level of excitement and entertainment, which is something that, truthfully, no one traditional dealer can provide.”

Interblock, the Slovenian company that was a pioneer in the ETG field, has an array of products in this realm. One of them is Ministar Dice.

It is composed of Interblock’s new micro-office generator and play stations that are closely situated around it, providing great visibility for the player. Ministar offers more of the features Interblock’s Diamond Craps does, but in a smaller, space-saving package.

Ministar Dice will also offer the Majestic Button, a motion-activated sensor that allows players to set, shake and shoot the dice.

As for features, it is available with six, eight or 10 seats. It has color-adjusted armrests. It has the ability to connect to external generators like Interblock Stadiums or StarBar.

Grand Casino Bucharest is the first property in Romania to install the company’s award-winning Universal Cabinet.

The Universal Cabinet product line is one of Interblock’s latest breakthrough form factors, offering an entirely new way for players to interact with their favorite table games—elevating the experience for all, from the novice player to the expert.

The Universal Cabinet provides an independent game play experience by allowing players to set the pace of their own individualized game. It consists of visually enticing game displays—a crisp 5G screen and fun, 3D game toppers—which include a roulette wheel, bubble craps generator or a horizontal video player information display.

In June, Interblock announced it has been acquired by funds managed by American global asset management firm Oaktree Capital Management, LP. The high performance of ETGs was a prominent factor in the process.

“We have delivered robust growth over the past six years, which can be attributed to the company’s dedicated team of ETG specialists, a best-in-class product portfolio, data-driven decision making and our continued focus on innovation,” said John Connelly, Global CEO of Interblock, in announcing the acquisition.

“There is significant momentum within the electronic table game sector, making it the right time to partner with one of the largest private equity firms in the world, Oaktree. Moving forward, we are excited about our partnership with Oaktree and the ability to further accelerate our momentum, concentrating on both organic growth and potential acquisitions.”

As the industry winds toward the Global Gaming Expo, operators and vendors relish the sustained impact of ETGs. It gives them the feeling of a player who has reached the bonus round of a game.

It’s going to pay off. It’s just a question of how much.