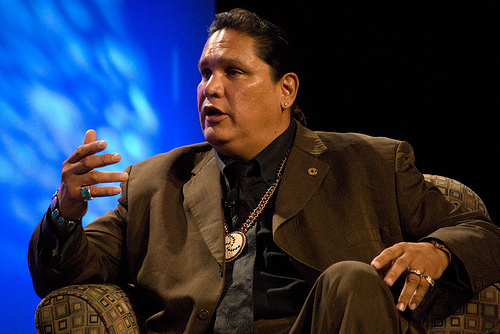 In October, a conference held at the Fort McDowell Casino Resort in Scottsdale, Arizona, convened to consider the 20th anniversary of the passage of the Indian Gaming Regulatory Act, or IGRA as it is commonly known. Ernie Stevens, who is finishing his fourth term as chairman of the National Indian Gaming Association, was one of six recipients of the “Path Breaker” award, recognizing his impact on Indian gaming. Stevens met with Global Gaming Business Publisher Roger Gros during the conference to talk about his award and the bill that has caused such controversy in Indian Country. To hear a full version of the interview, visit www.ggbmagazine.com and click on the GGB Podcast button to listen or download the interview to your iPod or your MP3 player.

GGB: Some people consider IGRA the justification for Indian gaming. Other people look at it as an attack on tribal sovereignty. Where do you stand on that?

Stevens: I side with Wendell Chino and Roger Jourdain. It is an intrusion on tribal sovereignty without question, and I’ve testified before Congress about that fact. I barely knew Wendell Chino, but my father worked closely with him in the Bureau of Indian Affairs. My father was never someone who sold out sovereignty, but he also had to work for the federal government. So he and Wendell went around and around about it, but they were great friends. He was a great man and a great warrior. My father worked for Roger Jourdain. These guys were very forceful about tribal sovereignty and they might have been a little loud, but they were upset. To this day, we all know that IGRA was an intrusion on tribal sovereignty.

We are proud of what we’ve done under IGRAà But if we had been treated as we should have been, it would be a much larger industry and benefited many more tribes.

We celebrate the successes we’ve achieved under IGRA but we don’t celebrate IGRA.

So you believe that the basis of Indian gaming was formed by the Supreme Court’s Cabazon decision rather than IGRA?

Of course. Tribes go way back with gaming, long before there was an IGRA. We always had gaming in Indian Country. We used gaming to make our lives better in Indian Country. And that remains our challenge today. And with the economy the way it is today, it is even more important. We have to make adjustments so Indian Country can continue to benefit from Indian gaming and IGRA continues to be a roadblock, not a benefit. That’s what NIGA is all about. We’ve got to come together and figure it all out. Whether it’s regulation or new legislation, we need some answers to this economic downturn.

Do you believe that IGRA has been a success in terms of delivering self-determination for tribes?

There were many confrontations in the early years in which tribes and the federal government faced each other down.

In that era, we still felt our energy as activists. But we also knew that we had a strong legal argument. We had public officials, regulators, operators and legal minds who supported us. So it wasn’t just about making noise anymore. We made noise but we had the backing to stand by that. We were professional and energetic. These are the kinds of things that motivate us today.

We’ve still got a few matters to clear up with this, but I suppose you can call it a victory. I’m excited about it. We can define it as a victory because it avoids a terrible economic impact on Indian Country. It would have taken millions of dollars out of the Class II industry.

I respect Norm DesRosiers and Phil Hogen and the staff at the NIGC. But we have a strong legal stance here. We’ve won several cases and it will continue to be a challenge. So it’s hard to declare victory until everything is resolved.

There’s a new administration in Washington, D.C. John McCain has been a very good friend of Indian Country, but most of the tribes backed Barack Obama. Why was that?

This organization is non-partisan, so we did not take a position. But many Indian folks did support Senator Obama. John McCain has a long history with native people, but at the same time, Obama reached out to Indian Country in a way McCain did not and personalized his influence. Obama reached out to many of the senior leaders, so I think that was the reason for their support.

What I wanted to see was more Indians at the polling boxes than ever before and I think we accomplished that.

Now that Obama has won, we’re going to be on his doorstep explaining who we are, what we do and what we need to succeed.

Do you consider Indian gaming a mature industry today that deserves to have federal regulations loosened?

We have so many levels of regulation, I think the federal level is superfluous. We have tribal gaming commission, tribal police, state-level regulations, much more than any other gaming industry. Our governments are responsible and should be permitted to be the sole oversight.

Is it mature? Yes. I believe it is. We have responsibility, accountability and transparency through the appropriate government process in Indian Country.