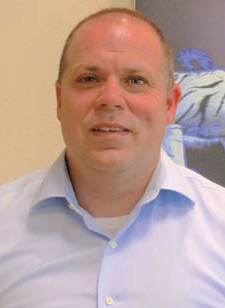 Eric Persson took over as general manager of Aruze Gaming in March and was promoted to president and COO in October. Persson has a long career on the operations side of the industry, most recently as the corporate vice president of slot operations for Las Vegas Sands. He takes over a company that has posted impressive gains over the past year. He spoke with GGB Publisher Roger Gros and Editor Frank Legato at last month’s Global Gaming Expo.

GGB: You came to Aruze from a career in casino operations. How did that experience help you approach the job at Aruze?

Eric Persson: When I knew I was going to leave Las Vegas Sands, the only company I wanted to consider was Aruze. And they’re exactly the company I wanted to go to. And that had a lot to do with the fact that my career has been spent mainly working with very successful businessmen—people like Michael Gaughan, Sheldon Adelson and Jeremy Jacobs at Delaware North. Coming to a company that’s very entrepreneurial by nature, with a true owner, like (parent Universal CEO Kazuo) Okada, was very appealing to me. And the reason is, I thought that I’d be able to effect the change more quickly by coming to an organization that had an individual owner that would allow some entrepreneurial freedom. And that’s exactly what it’s been at Aruze.

I wanted to take all the things that were hidden disrupters for me, as one of the largest buyers in the world at Las Vegas Sands, and the things that I didn’t like about buying slot product, and then solve those customers’ needs, because they weren’t just my issues; they were many customers’ issues. For example, I never liked it when I would buy hardware, and then the game didn’t work, and they’d want me to purchase a conversion. So, one of the first things we announced was a two-year performance guarantee. So if your product’s doing 80 percent or less of floor average, the first two years, we’re going to give you conversion. We’re going to make sure it performs.

From your first six months as GM of Aruze, what are the main lessons you’ve taken, that will help point the right direction forward?

One of the big things was getting back towards being focused on electronic table games, because it’s a space where we’ve been incredibly successful historically. We started competing more in the video space, and I understand why—because it’s appealing. It’s easy to create software titles. But the truth is, it’s a highly, highly competitive market. We’re never going to outspend our competitors.

But from an ETG standpoint, we’re a leader. You have to see our craps table, which solves a huge customer need, because at the end of the day, it’s a real craps table; you’re playing craps, you’re throwing dice. It takes one-fourth the labor a traditional craps table takes. Many more rolls per hour, never has dealer error. There is no theft. And also, when you normally would shut down the table for graveyard, it has an auto-play mode where you’re able to throw virtual dice and still continue to play.

We have a new roulette wheel that uses a technology called DLP Projection Mapping. It takes a traditional wheel, and it has a real ball. The ball spins around, so it’s an actual roulette wheel. But it has a lot of projection mapping technology involved. And so, it’s integrated into the game play. You can see the trends of what numbers have been coming up, just by eyeballing the board. When the number comes out, it will read the number to you. It has a meteor—when the ball’s spinning around, it looks like a meteor is falling. It’s just a lot of fun.

Do you still want to be a disrupter?

There’s no question about it. I came here, because I thought this would be the most amount of fun. I’m blessed in my life, because it’s not about economics, although I love getting paid. But what I really love is competing. And I felt like this was an industry we could compete in. We could compete really hard; I got with the right company. When you’re small, and you’re not tied to certain economic strategies, you can do so much more.

You’re dealing with some controversy with the clashes of the parent company and Mr. Okada. Is that a distraction for you?

No. At the end of the day, what you have is a company that is vibrant, that is very successful. And we have a shareholder, Mr. Okada, who is having issues—a lot of them are family issues; he’s lost control of his trust, although I think he’s taken a lot of steps that (will lead to his) regaining control of his trust formally over the next month.

You have to separate Aruze from the shareholder. I believe Mr. Okada will come out the other side. We’ve taken steps to mitigate risks. For example, I’m a trustee now. Mr. Okada has no management control, or economic benefit. (CEO and Chairman of the Board) Takahiro Usui and myself, we run the company. And so, we do have to take pragmatic steps, but we believe at the end of the day, Mr. Okada couldn’t say more forcefully how he believes that he’s been wronged here, and he’s going to prove it.