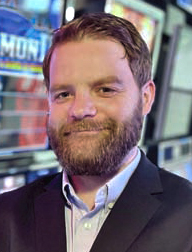 When Travis Bussey applied for a mechanical engineer position at what is now Everi Holdings, he wasn’t too sure what kind of product the company produced.

But he was excited to land the position just after receiving his bachelor’s degree from the University of Texas. He was even more excited to find out the company, then known as Multimedia Games, served the casino industry.

“There were challenges, but it’s been super fun working on the hardware to make gaming products,” Bussey says. “I love making entertainment products.”

The company had offices in Bussey’s hometown of Austin, Texas. Having a workplace devoted to gambling in a state with no casinos seems a little odd, but Bussey’s not complaining. He’s just surprised he’s still with the company after all these years, moving up the chain of command even as Multimedia merged with Global Cash Access to form Everi in 2015.

“My role and responsibilities have changed just about every year for the past 14 years. These new challenges have helped keep me interested in gaming,” he says.

The company scheduled a major release every three years on average. These days they’ve expanded production, and have multiple game studios beyond Austin: Reno, Chicago and Las Vegas. The studios are game development-centric.

“To my surprise, everyone seemed more efficient working from home,” he says. “They can do designs at home.”

But to build prototypes you need people in the office, Bussey says. The hardware team has the largest presence.

“My perspective is there is no reason to go back to requiring everyone to come in. Yet there are still benefits to an in-person team.”

“We’re focused on rapid redesigns,” he explains. “But if we can’t get a capacitor, we have to wait or go through another redesign.”

Engineering school teaches important information like problem solving. No one knows everything. Find subject matter experts and leverage that.

Bussey wants to give a shout out to the executive team and upper management team for their feedback. He offers high praise to Keith Riggs, senior vice president and games chief technology officer, because of his “logical mind.”

“He gives me feedback regularly and keeps an even keel when things get tricky,” says Bussey, who likes spending time outside with his two young children.

As far as advice for the engineer of the future, Bussey has three important words.

“Always stay hungry. Build relations with people around you, not just your department. Never rest on your laurels.”