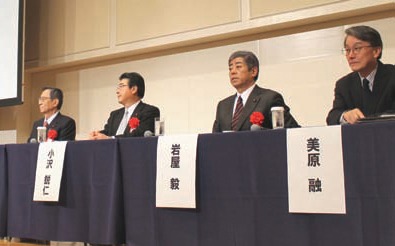 One indication of how long Japan has been considering gaming is demonstrated by an education effort that is now in its 11th year.

The Japan Academy of Integrated & Gaming Studies (IRG) held its meeting at Dai-ichi Hotel Tokyo on February 25, for the first time since the IR Promotion Act was introduced to the Diet at the end of last year.

“Amid introduction of the act in last year which is expected to be enacted during the current Diet session, many new people are joining us at this meeting,” he said. “I would like to make this meeting fruitful by exchanging opinions on various future issues, which are of some help for the attendees.”

Video messages from the heads of local governments interested in IR development among others, such as Ichiro Matsui, governor of Osaka Prefecture and Harumi Takahashi, governor of Hokkaido, were delivered to the meeting.

After the act was presented to the Diet last December, the city and prefecture of Osaka jointly established the IR Site Preparation Council. Matsui said he was hoping for early enactment of IR-related acts, indicating he would like to accomplish the IR invitation in the Kansai area to prime the economy of Osaka, which is a metropolis comparable to Tokyo.

Takahashi said the IR capitalizing superiority of a local area such as Hokkaido would contribute to Japan becoming a tourism-oriented country. She added that, while she was now conducting various studies with the cities of Otaru, Kushiro and Tomakomai, she would like the government to consider the institutional design for the IR delivering its spread effects to every corner of the country.

The Kansai area, which includes Osaka and Hokkaido, is attracting everyone’s attention as strong candidates for IR sites.

Another event held on February 5 was the first meeting of the Establishment Preparatory Committee of the IR Promotion Council, which would provide policy proposals on IR matters.

Influential individuals and business groups across the country were listed as its founders, and 35 prefectures and 19 cities designated by ordinance among local governments participated as observers. It demonstrates that local governments other than Hokkaido and Osaka are also interested in the IR.

Representatives of the companies explained their philosophy and plans, and how their plans would lead to an increase of tourism to Japan. Each suggested a taxation system, proposed non-gaming amenities and other matters important to the Japanese government, and demonstrated enthusiasm to develop an IR characterized by Japanese tradition and cultures.

Transparency and establishment of relationships with regulatory agencies are also important in any IR plan.

At the same meeting, a discussion with Diet members and others was held. The panel included several legislators and gaming experts, including Hiroyuki Hosoda, Sakihito Ozawa, Takeshi Iwaya and Toru Mihara.

Hosoda, representing the Diet Members Alliance, explained a procedural rule by which each fraction of the ruling party and the opposition party would approve or deny a bill requiring a referendum, and emphasized the enactment of the IR Promotion Bill during the current Diet session. In addition, he guaranteed an open application process to foreign operators and a fair hearing.

Iwaya, who serves a chief secretary of Diet Members Alliance, has worked on the IR issue more than 10 years. He talked about both local casinos and metropolitan casinos.

“The Promotion Act has no definition of such casinos, but stipulates the independence of local governments,” Iwaya said. “The materials indicating a basic concept of the act define the local area casinos as the IR with a size appropriate for a concentrated area.”

Mihara expanded the subject to online gaming, and commented that further discussion would be required, saying, “Discussion should be made in a step-by-step manner, since the discussion may go to unexpected areas under the current gambling ban situation.”

He concluded that a giant step has been made by the cooperation of the economic community, national government, local governments, and academic associations.