New casinos may be growing the market, but they’re also splitting the pie and putting weaker properties in jeopardy. For operators, this may be the new normal. 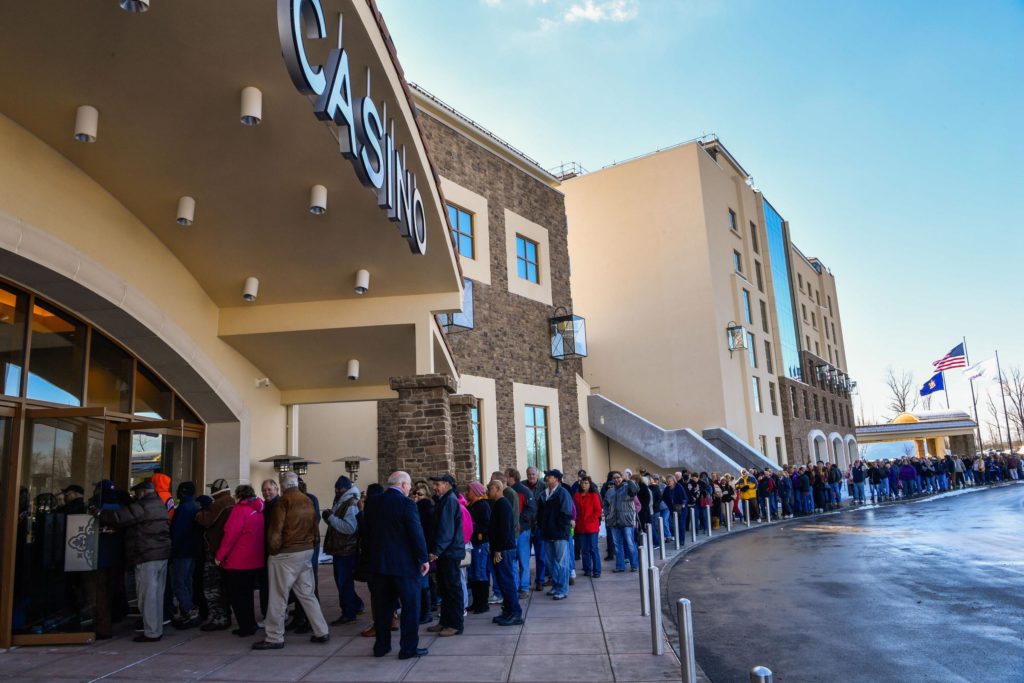 Three casinos have opened there since last December: del Lago (at left) in the Southern Tier, Rivers in Schenectady, and the new casino at Tioga Downs in the Finger Lakes area. When the projects were pitched, gaming consultants forecasted combined revenues of $588 million through the end of 2017.

The reality hasn’t been quite as rosy.

Through August, the gaming halls generated just $222 million in combined gross gaming revenue, making a shortfall a pretty sure bet. They’ve also siphoned off revenues from their competition, with Saratoga and Vernon Downs off by 20 percent in August.

The New York Times called the returns “underwhelming” and a sign of industry cannibalization. The New York Post called it “just the disappointment we expected.”

Of course, that’s just part of the story. The new casinos have plainly underperformed based on projections, but also have grown the market overall, says Frank Fantini of Fantini Research.

“If you added del Lago to Vernon Downs for a Central New York region, they gained revenues in August up 61 percent over last year,” says Fantini. “Adding Saratoga to Rivers in Schenectady for a Capitol region, they were up 51 percent.

Governor Andrew Cuomo, who in 2012 pushed lawmakers to approve four upstate casinos, is unconcerned by the interim numbers. “The variance with the projections doesn’t bother me that much,” the governor said. “They’ve all been wildly successful in creating jobs and building beautiful complexes. Now they have actual data; they’ll adjust.”

Fantini tends to agree. “It may take 18, 24, even 36 months for them to ramp up to what you’d call their run rate. It will take that long for new customers to visit, sign up for player cards, and get into the database so the casinos can market to them. The numbers a year from now might be closer to the forecast.”

The same kind of crunch is playing out across the Northeastern and Mid-Atlantic states: Live Casino & Hotel, a Cordish Companies resort that opened in Hanover, Maryland in 2012, is now facing off with MGM Resorts’ sprawling billion-dollar National Harbor resort on the Potomac River, which launched in December. In Philadelphia, the push for a second city casino continues, to the dismay of incumbents SugarHouse, Harrah’s Philadelphia and others in the region.

Massachusetts will provide more competition for surrounding states when its first casinos open: MGM Springfield, set to open next year; and Wynn in Everett, which will follow in 2019.

And back in the Empire State, don’t be surprised if full-fledged casino resorts are proposed for the New York City metro area, where the Resorts World slot parlor at Aqueduct continues to outperform. The revenue pie may be bigger, but the slices are getting smaller.

“It’s simple math,” says David Katz, managing director of Telsey Advisory Group. “Put a yardstick from Maine to Pennsylvania, and there are quite a few more outlets than there were a few years ago. It’s harder to find your revenue dollars in a crowded landscape.

“You have to look at returns on casino projects in the current environment,” he adds. “You can’t measure against what those opportunities might have been 10, 20 years ago. It was much easier then.”

To maintain its edge—and to hedge against a possible new casino proposed for Philadelphia’s stadium district—in 2016 SugarHouse unveiled a $164 million expansion that included a new high-limit lounge, additional table games and slots, new restaurants and a 30,000-square-foot event center.

“Heck, we needed it to compete,” says General Manager Wendy Hamilton. Statewide in Pennsylvania, gaming revenue was down slightly in 2016-17 over the previous fiscal year, with only four of 12 casinos seeing growth.

“They say a high tide floats all boats,” says Hamilton. “Well, this is what a stagnant tide does. You always have to be finding new pockets of profit; you can’t depend on market growth. With the threat of more competition in southeastern Pennsylvania, we continue to be baffled by how it will work for anyone—including that new tenant.” The proposed new casino is a project of the Cordish Companies and Greenwood Gaming.

Reminded that everyone in the market knew a fourth license was up for grabs in Philadelphia, Hamilton counters, “That bill was signed in 2004. Back then, nobody foresaw that the economy would turn upside down or that four casinos would close in Atlantic City in 2014. Let’s not assume that legislation we wrote in 2004 is perfectly applicable in 2017.”

Maryland Live is also fighting back. The resort is adding a $200 million, 310-room hotel tower with meeting space, a spa and fitness center, a concert venue and new retail and dining options. It’s set to open in 2018.

“We’re holding up fine, and when we add the new amenities, we’ll have completed our original master plan and be prepared to go toe-to-toe” with the new competition on the Potomac, says Robert J. Norton, president of Cordish Global Gaming. “It definitely gives us more tools in our arsenal.”

Jeff Gural, owner of Tioga Downs and Vernon Downs in upstate New York, says it’s “fairly obvious” the financial projections for new casinos there were wrong. “But from an economic development standpoint, (the new casino at Tioga Downs) has been a major success.”

“It’s right in the middle of so many other casinos. It made it hard for them to succeed and hard for me too, because we’re competing for the same customers. It also basically encouraged the Oneidas to be very aggressive, correctly so, to protect their turf.”

That tribe, which owns Turning Stone Resort Casino in Utica, began a major expansion in 2014—after the state approved del Lago—adding yet another casino to the region. Its $40 million, 65,000-square-foot Point Place Casino in Sullivan, slated to open next year, will include a gaming floor with nearly 500 slot machines and 20 table games.

In the ongoing game of one-upmanship, Tioga Downs is adding its own hotel as well as a golf course. “We remain optimistic we’ll have people coming to the Finger Lakes region to visit the wineries, Corning Glass or Watkins Glen,” says Gural. “I remain cautiously optimistic that we’ll be OK once our project is complete.”

Not incidentally, the racetrack owner is still pushing for a casino at the Meadowlands sports complex in New Jersey, a plan that was soundly rejected in a statewide referendum in 2016. He says he’ll bide his time until New York adds three new casinos in the southern part of the state, a development he thinks is inevitable.

“I just have to be patient,” he says. “I know there will be a casino at the Meadowlands. It’s the best location for a casino in America.”

With so many casinos dotting the landscape, is every one destined to be a locals property? Does it do away with the concept of a destination resort?

“Obviously, convenience is a big factor in determining where you play, just like it is when you go to a convenience store, the gas station or the bank,” Fantini says. “If you’re in central New York and you now have four major casinos including Turning Stone at Oneida, I would say yes, you’re probably looking at locals casinos there. If you’re dealing with Schenectady and the Capitol Region and you only have one full casino, then your geographic reach may be a bit broader in terms of players.”

In response to the flood of new competition, New York State Assemblyman Gary Pretlow has griped that casinos there will probably ask for a tax cut.

“You give a better tax rate, that money doesn’t go to education; it goes to a millionaire,” Pretlow said in June. “Give me a break.” But that month, lawmakers gave $2 million in tax relief to the struggling Vernon Downs racino.

And so the debate continues. Fantini says the Baltimore-Washington area, with a population in excess of 9 million, actually has room for another casino. Norton vehemently disagrees.

“Putting aside the obvious issues of cannibalization already evident in the market, there’s a basic issue of fairness. We have invested hundreds of millions of dollars in capital, created thousands of quality new jobs in the state, and generated hundreds of millions of new taxes for Maryland, all based on the current laws. Changing the rules of the road after the fact would not only be punitive to companies such as ours, but would send an extremely negative message to companies about doing business in Maryland.

“There’s growth in the market,” Norton says, “but a lot of the growth is coming on the backs of the existing players.”

The days are long gone when gaming in the East was limited to racetracks, tribal casinos and Atlantic City. Competition has become a fact of life. “But as long as you put the right strategies and tools together, this is still a very viable business,” says Katz. “That realistic approach needs to extend to the regulatory bodies involved, too. There are states where the tax structures are so high, it may be impossible to generate an appropriate return. They need to be realistic about the level at which they can tax an entity.”

“Nobody cries for a casino,” says Fantini. “First of all, they exist to take your money. Everybody else does, too—the Philadelphia Phillies exist to take your money, charging $12 for a beer in exchange for entertainment, but nobody looks at it that way. They see casinos as those hard-hearted souls out there to take every penny you’ve got. They also have this misperception that all casinos are making a profit.”

GGB: In upstate New York, what factors are in play besides oversupply?

Klebanow: There’s certainly an oversupply issue; there’s also a demographics issue. The I-90 corridor (home of del Lago) already had multiple casinos: Seneca Buffalo Creek, Hamburg Gaming, Finger Lakes Casino, Turning Stone and Vernon Downs. That’s a lot for any market, much less one in a rural portion of the state.

You can mitigate proximity to population by building more elaborate and attractive resorts—that was Foxwoods’ and Mohegan Sun’s strategy. The risk is that someone could open a more convenient casino between them and their customers.

How did the consultants miss in their revenue projections?

Consultants rely on similar forecasting models, dependent on assumptions including each property’s level of attraction. If a developer says he’ll build a four-star resort with 10 restaurants, high-end meeting space and multiple entertainment venues, then builds a three-star hotel with a buffet, coffee shop and steak house, he diminishes the level of attraction. A gamer who’s disappointed in that new facility will return to his favored destination, whether it’s Turning Stone, Mohegan Pocono, Casino Niagara or Fallsview Niagara Falls.

Also, developers sometimes cherry-pick consultant reports and only use those with the highest projections. As a gaming regulator seeking to maximize gaming tax revenue, which project would you select—one that forecasts $200 million a year or $300 million? I’m not a mathematician, but 42 percent of $300 million is larger than 42 percent of $200 million.

Are the jobs and “economic benefits” worth it to the host communities?

Absolutely. What other industry can move into rural upstate New York and create 1,000 or more jobs without government subsidies? For years, the state struggled to find industries to replace Kodak, NCR, Smith-Corona and other employers that disappeared. It’s why prisons are in these rural areas: to provide jobs to residents that have seen entire industries vanish from their communities.

Can the new casinos meet expectations over time?

Normally, the second or third year is when a property achieves its first year of stabilized operations. But I don’t see any of those properties doubling their revenue to match projections.

The same crunch is happening elsewhere on the East Coast. What happens when Massachusetts opens? Is there ever a point when it’s time to stop?