The onetime heart of Las Vegas has a whole new beat. Downtown is the flip of the Strip, with its urban grit and funky vibe. It's become a must-see destination for tourists, and a gleam of hope for locals. 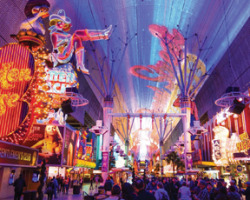 Long before there was a Strip, there was Downtown Las Vegas.

Like a mirage in the desert, it materialized at the end of the Gold Rush era, with the opening of the Union Pacific railroad station on Fremont Street. Downtown boasted the desert city’s first paved street (1905), its first electric street light (1908), and its first gambling saloon, powered by electricity from the new Hoover Dam.

Glitter Gulch, they called it, for its hurly-burly collection of storefront slot parlors, bingo halls, neon-lit lounges and assorted watering holes. The city’s first casino, the Golden Gate, opened Downtown as the Hotel Nevada in 1906. It offered small-stakes cards and social games while gambling was illegal from 1909 to 1931, but reopened as the “Sal Sagev Casino” (“Las Vegas” backward) when casinos became legal again in 1931, switching to Golden Gate in 1955. And in 1956, the first high-rise resort, the Fremont, rose a dizzying 15 stories. The cost: a whopping $6.5 million.

For decades, Downtown was the heart and soul of Sin City. But starting in the 1950s, a building boom banked by the mob through the Teamsters Pension Fund transformed adjoining Las Vegas Boulevard into the Strip. Over time, an estimated 80 percent of the gaming business migrated there, and Downtown lost its mojo.

That’s all changing, thanks to a coalition of public and private investors, entrepreneurs, and of course, casinos, all pulling together to turn yesterday’s news into the next big thing. This is one urban renewal that’s actually working.

“Downtown and the Strip complement each other, but they’re incredibly different experiences, by design,” says Seth Schorr, CEO of Fifth Street Gaming. “If Downtown is about authenticity, the Strip is about fantasy.” If the Strip is Times Square, he continues, Downtown is New York’s famous (and famously trendy) Meatpacking District: gritty, urban, and uber-cool.

An early innovation was the Fremont Street Experience, which recognized the potential of Downtown Las Vegas way back in the 1990s. The outdoor pedestrian mall and entertainment destination hosts nightly concerts, dazzling sound and light shows, and zany attractions like Slotzilla, a 12-story slot-themed zip line that flies intrepid riders from a launch tower 120 feet up into the heart of the main drag. Today, an estimated 18 million to 20 million tourists each year visit the Fremont Street Experience—or roughly half the 40 million annual visitors to Las Vegas.

Schorr points to 2011-12 as the real turning point, starting with the opening of the Mob Museum and the Smith Center for the Performing Arts, and culminating with one big game-changer: the arrival of Zappos CEO Tony Hsieh.

The online retailer not only moved his apparel and shoe business into the former Las Vegas City Hall, he also said he would invest $350 million of his estimated $840 million personal fortune in the neighborhood.

He’s made good on that pledge. According to a 2015 feature in Forbes, Hsieh’s Downtown Project now owns 100 properties, 58 acres of Downtown real estate, 215,000 square feet of retail space, 130,000 square feet of office space and thousands of apartments and hotel rooms.

And the boom was on. Also in 2011, Greg and Derek Stevens bought the old Fitzgeralds casino and rebranded it as the D, promising a vibe with “a little bit more Lady Gaga, Katy Perry and Black Eyed Peas,” Derek Stevens said at the time. In 2013, Schorr’s Fifth Street Gaming reopened the former Lady Luck as the Downtown Grand, following a $100 million upgrade.

“Within a two-year period, there were more changes Downtown than in literally 20 years, just one thing after another,” says Schorr. Importantly, he points out, casinos in the vicinity urged visitors to get out, get around, and see what the rest of the district had to offer.

“Strip casinos for decades were built to be the perfect mousetrap, so you’d never have to leave,” Schorr says. “We designed a casino that integrates with the city. It’s a relatively mid-sized casino box, and in that box are six or seven different points where people can access the street, and come and go as they please. It seems like a simple idea, but it goes against the way casinos were designed for decades.”

When the Downtown Grand was under renovation, he says, “We saw it around the country, a lot of hypotheses that people wanted an urban experience,” with more interaction between resorts and their surrounding communities. “Fast-forward four years, and you’ve seen (Caesars Entertainment’s) Linq open, and (MGM’s) Park. It’s no longer a hypothesis.”

“What’s going on is we’re starting to build critical mass Downtown,” says David Strow, vice president of communications at Boyd Gaming, which owns three resorts Downtown: the Fremont, the California and Main Street Station. “The market is coming into its own as a destination.”

“The Fremont Street Experience started that process of private and public investment in the area,” Strow says, “but it’s this cumulative investment over the years that’s built up the momentum in the market here. It’s everyone working together to build this great experience—all the business owners, city government and casino owners investing in the area to build this great experience. Working together, we’re creating something very special in Downtown Las Vegas.”

Not coincidentally, as business picked up, crime dropped. According to the Las Vegas Sun, in 2012 robberies decreased 17 percent, gun calls fell 35 percent, assaults were down 23 percent and fights fell 20 percent.

The gaming side has also responded. In terms of revenue, “Downtown has led the state fairly consistently in the past few years in terms of the growth rate,” says Strow.

Boyd, the largest of the multi-property operators Downtown, “has seen pretty substantial increases in both revenues and profitability for the last couple years,” he adds. “We just reported first-quarter results, and in Downtown Las Vegas we saw 3.5 percent revenue growth and a 19 percent increase in profitability. Those kinds of growth rates are pretty consistent with what we saw in 2015. We’re certainly seeing the benefits of this continuing increase of visitation to the area.”

Amid all the positive changes Downtown, one thing remains the same: its well-deserved reputation as a great place to gamble.

“Gambling is a big part of it,” said Derek Stevens, co-owner of the D, in a December interview with Global Gaming Business. “It’s important for people to have an experience at blackjack where you clip 10 in a row or catch a heater at a dice game or hit exactly what you need at a slot you’re playing.

“Obviously, the casino has a small house edge, but it’s gotta be small,” Stevens insisted. “Realistically, if somebody comes to Vegas every year for eight years and they lose every time, what are the odds of them coming back? It’s important for people to win. That is critical to the Las Vegas experience.”

Schorr agrees. “Most properties have 3-2 blackjack instead of 6-5 and generally better odds on craps. Downtown has looser slot machines—that is just a fact. There’s no question casinos all have the same product, but you’re going to get a better gamble Downtown.”

As for the much-hyped Downtown renaissance, that’s a gamble the community is making together, said Stevens. From the Fremont Street Experience to the First Friday monthly art festivals to revamped gaming halls to restaurants, bars, retailers and other industry, “we are all partial owners,” said Stevens. “We work together to develop strategies … We have more of a collective and common goal than most other jurisdictions.”

Stevens suggested that Downtown is above the kind of direct, dog-eat-dog competition that characterizes some other gaming enclaves. “One of the cool things down here is, you’re going to visit 3.5 casinos on every trip, and I think that is a great thing. If you’re feeling unlucky, just bop 80 feet across the street, and you don’t have to worry about your girlfriend walking a mile.”

“It’s great to see such a diversity of new startups and entrepreneurs, from the tech space to new bars and restaurants and things like that,” said Stevens. “This is a very, very different area than even five years ago, when it was a little bit rough going.”

And it’s just the beginning, says Schorr. “I would say we’re 25 percent there. We’re going to see far more growth, and the next stage is to have more people moving Downtown, more residential development.”