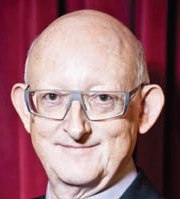 Derek Webb is the inventor of 3-Card Poker, the most successful proprietary table game in the history of the gaming industry. Now retired after selling his company, Prime Table Games, to Galaxy Gaming, he spoke with GGB Publisher Roger Gros about the cover story in this month’s magazine.

GGB: What was your idea for 3-Card Poker, and how did you roll it out?

Derek Webb: I wanted to design a three-unit bet game that incorporated what I thought was the best of Caribbean Stud and the best of Let It Ride, and it was going to be naturally faster than Caribbean or Let It Ride. But also, the design needed to make sure that we got the three bet units out more frequently than Caribbean or Let It Ride. And those two combined features meant that it could go with a lower house advantage than either of those games, and give the player a more positive experience, and at the same time, create a higher win for the operator. So, in effect, you’re serving both sides of the table better than what was already out there.

The game started in Europe at several small casinos. But tell us about your first introduction to the U.S. casinos.

Eventually, we got started in Mississippi and Nevada at a pretty similar time. Mississippi was a great installation, and to some extent, that was a personal contact with Lyle Berman, who I played poker with, and he owned the Grand in Gulfport. That was early ’96, over 20 years ago. And they did a great installation, because they put it in a great location, and they gave me all the statistics on it, they allowed me to help write their internal procedures—they spent time with me to get it right. They allocated one full day to train the dealers, get the installation correct. So Barry Morris and the executives there really deserve the credit.

In Nevada, we ended up going with the Stardust, and unfortunately—and I’m afraid this is still true today—Nevada operators do not do a diligent enough job with new game installation. They expect their dealers to be able to learn the games quickly, but do not pay attention to the nuances, they do not try to maximize the revenue from the game, and unfortunately, while the game did enough to pass its field trial, and the volume of revenue was adequate, the volume of participation was adequate, the hold percentage was pretty low, and there was a problem with the old shuffling machines at that time.

So the rule of thumb for new games is, if you’re going replace a game that’s already performing, that’s already making revenue for the casino, your game has to be at least to that level, if not higher.

Yes, in theory. But the operator needs to give it a chance. They’re not really trying it if they’re not giving it enough exposure. They have to be willing to put it in a good location on the floor to start with, so it needs to generate as much revenue as the game it is replacing, theoretically. But, for example, a casino could be rearranging its pit—moving a $100 blackjack table out of the pit, and wanting to try some specialty gaming. In that case, you wouldn’t expect it to do as much as the table it’s replacing, so there are exceptions to that rule.

Do you recommend that game inventors sign with an established table game company?

Yes, but you’re probably not going to get a very good deal. In the early days, everybody saw Caribbean and Let It Ride and thought it was easy, and you could get a 50-50 deal.

Now, the vendors say they are licensed everywhere, and have a wide portfolio of games, a lot of intellectual property. So it’s unlikely they’ll give you more than 10 percent or 20 percent of the game.

What do you think technology has in store for table games now?

The suppliers will want to introduce technology, because it’s easier to get something exclusive, it’s easier to patent it, so it’s a supplier-driven angle. And anything that can help reduce labor costs is also a consideration. Anything that can speed the game up is also a consideration, from an operator’s point of view. But, I’m a little old-fashioned; I’ll look at it from the player’s point of view, from the gambler’s perspective, right?