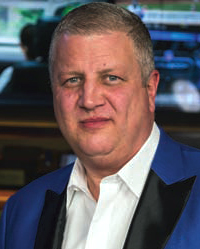 Derek Stevens came to Las Vegas from Detroit in 2006, when he and his brother purchased the Golden Gate Hotel, the oldest operating casino in Las Vegas. He later bought the D (the former Fitzgerald’s) and created the Downtown Las Vegas Events Center. Last month, he opened Circa Resort & Casino at the foot of Fremont Street, a new concept that relies heavily on sports betting and a premier pool experience. He spoke with GGB Publisher Roger Gros at his offices in the D in October for the cover story of GGB’s Casino Style magazine due out in December.

GGB: Explain how you got to Vegas and are now about to open Circa.

Derek Stevens: I started coming to Las Vegas a long time ago, in the ’80s. I came for pleasure. I’m a sports fan, so I came out to a lot of fights. I came out for a football weekend, basketball, things like that. But I never envisioned—forget about owning a casino—I never envisioned working at a casino.

I was pretty happy working in the manufacturing business, out of the Midwest. And, you know, as time goes by, you come out here for a lot of things. And eventually it became for business and conventions and things like that.

When we had an opportunity to get into this industry, it was 2006. I’ve always loved Las Vegas. I’ve always loved the state of Nevada, from the business perspective. It took me 18 months to get licensed. So I got my first license in March 2008. And remember, that’s when the economy just completely tanked for about a year and a half, which, ironically, was probably the most fortunate thing that ever happened to us. Because a lot of real-estate values in Downtown Las Vegas became far less expensive.

The thing that stands out most of all about Circa is the sportsbook. Sports betting is now something you can walk around with in your pocket. Why did you decide to build such a massive sportsbook?

I have always thought in years past that a significant brick-and-mortar sportsbook was something that could bring people together. Obviously betting on an app is not just the future; it’s the present. It’s easy, convenient and quick. It’s more efficient. But there’s still an element of going to a sportsbook, and the camaraderie with all the people, that creates a unique excitement that you can’t get elsewhere.

I would say there’s still something inside of a Las Vegas brick-and-mortar sportsbook that’s different. It’s not an experience they can get at Hometown USA. We’ve created a stadium effect. And for us, this isn’t really all that new. I own the Downtown Las Vegas Events Center where we’ve been throwing concerts, EDM events, food festivals, boxing matches, UFC matches, and watch parties.

We learned a lot in doing watch parties at our events center. The psychology of someone that goes to a watch party, it’s much different than someone that’s going to a live sporting event. It’s a different angle, a different perspective. People feel differently when they go to a watch party. There is more social demeanor as they come into the game—a little bit more upbeat and willing to socialize. We’ve really tried to create our sportsbook to be something where you end up picking up a lot of the energy of all the rest of the fans and customers who are there.

The sportsbook is in combination with your pool experience. What’s going to make the Circa pools so different?

First, really, the scale. Stadium Swim will be a key feature in Circa Las Vegas, with a capacity of around 4,000. And this is a stadium to watch events and enjoy the sun. We’re going to have programming that will be far more musically oriented throughout most of the day. So, as opposed to us designing a pool as an amenity for a hotel, with 512 rooms and suites, you could almost say our hotel is designed as an amenity to Stadium Swim.

So there will be six pools, and all kinds of different environments at each pool?

Yes, six pools. Two upper-deck pools. Maybe a little more privacy. Four lower-deck pools, two of which have big walk-up bars at the end of the pools. And these pools are pretty big, by the way.

How about in the winter? It’s only a short winter in Vegas, but the pools still close down for a few months.

That was another thing I always thought about over my many trips to Las Vegas. Obviously I’d been out here Memorial Day, Fourth of July, Labor Day, you know, all throughout the summer. But you come out in December, January, the pools are always closed. I always wondered why the pools close in Las Vegas, but they can stay open at Vail, or Park City, or Aspen.