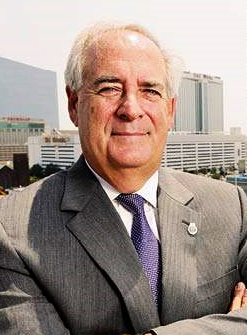 Dave Rebuck is now the longest-serving director of the New Jersey Division of Gaming Enforcement in its 40-year history. But with a new governor being elected in November, it may be his last year. From his initial charge to reform the regulatory system in New Jersey, he has dealt with a myriad of issues from online gaming to casino closures and more focus on new technology. He spoke with GGB Publisher Roger Gros at his offices in Atlantic City in June.

The last time we talked, Atlantic City was in dire shape, having lost five casinos in a little more than a year. Are things more stable now?

Anyone who looks at the numbers in Atlantic City over the last 24 months would say we have stability, even though we had the Taj Mahal and two of the three Caesars properties in bankruptcy. We weren’t seeing that continued downturn in revenue that was in play for five or six years before that. For the eight months or so since the Taj closed last October, we’ve had a real upbeat. But we have to be cautious because Atlantic City is still a very sensitive market to outside influences. The government is under a state monitor, trying to get its feet under itself. The casino industry, however, now has a very strong foundation.

When the Taj reopens as the Hard Rock Atlantic City next year, will the market be able to absorb it?

Yes, because I think Hard Rock will expand the market. With their database and brand awareness, people are going to want to come here. They’re being very aggressive, putting significant capital into the property, but they have a lot of work to do over the next nine months.

Last November, New Jersey voters overwhelmingly defeated an effort to bring casinos to North Jersey. Is that the last we’ve heard of that issue?

A lot of things are going to happen in the next year. We have a gubernatorial election and all the seats in the legislature are up for grabs, so we have completely new leadership. Whether or not that becomes an issue will be up to them. If Atlantic City can turn itself around and this market improves, you’re going to have less need from a public policy standpoint to expand gaming in other parts of the state. The operators here have that completely under their control.

While casino executives in Atlantic City are almost unanimously impressed with your actions since you’ve been head of the DGE, they are still concerned that regulatory costs are too high. How do you respond to that?

I can give them two numbers. When I started in 2011, $70 million was expended on the oversight of gambling in Atlantic City. Last year, it was $46 million. We had 343 employees overseeing the work of 11 casinos. Today, for seven operating casinos, we have 255 employees, and 25 people on the books for internet gaming.

I’m conscious of their concerns about the cost of regulation. We’re constantly looking at ways to reduce costs. But it’s all about integrity. I tell them if I can’t guarantee your integrity then you’re in big trouble. So I won’t sacrifice integrity simply to cut costs.

In the online gaming world, why hasn’t New Jersey completed interstate compacts with Nevada and even with the United Kingdom, which you were examining last year?

I have re-opened dialogue with AG Burnett (chairman of the Nevada Gaming Control Board) to determine if we can get an agreement to share liquidity for online poker. But since 90 percent of our revenue comes from online casino games other than poker, it really doesn’t matter too much until Nevada allows all casino games online.

With the U.K., we tried. We have three common operators between the U.K. and New Jersey, but the stipulation that we are required to house our servers in Atlantic City was a hurdle we just couldn’t overcome. Maybe the legislature will address that in the future, but it’s something we can’t change at our level.