Why not use the Wire Act to do what it was designed to do—eliminate illegal sports betting? 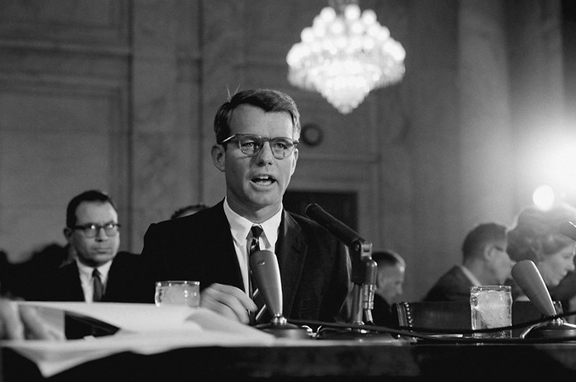 As Attorney General, Robert F. Kennedy believed the Wire Act would cut the legs out from under organized crime by disrupting its illegal gambling revenue

Sixty years after its passage, the Wire Act is more on the betting world’s mind than ever before. For over two decades, it has slowed the acceptance of online gambling, despite having been enacted long before the internet was invented.

The recent First Circuit court decision in New Hampshire Lottery Commission v. Rosen affirmed, as a Department of Justice memo had stated in 2011, that the law, which criminalizes the interstate transmission of wagers or wagering information, applies only to sports betting. Those in the business of offering online lotteries, poker and casino games breathed a bit easier, but the ruling raised the question of why sports wagering should be treated differently than any other form of betting. For the answer to that, we must understand why the Wire Act became law in the first place.

Let’s step 60 years into the past. Bobby Lewis is on top of the charts with “Tossin’ and Turnin.’” Wagon Train, Bonanza and Gunsmoke dominate the small screen, while West Side Story and The Guns of Navarone sit atop the box office. John F. Kennedy has just taken up residence in the Oval Office, with his brother Robert leading the Justice Department as attorney general.

RFK came into office with a clearly defined agenda: organized crime was target No. 1. Kennedy had become, in the late 1950s, an expert on the mob due to his service as chief counsel to the Senate’s Select Committee on Improper Activities in the Labor or Management Field, better known as the

Initially, Kennedy made the most of the tools he had available, channeling the Federal Bureau of Investigation, the Immigration Service, the Internal Revenue Service’s Intelligence Division, narcotics agents from the Treasury Department, the Secret Service, and the Bureau of Alcohol, Tobacco, and Firearms’ firepower into a much-publicized effort to bring the “full weight” of Justice against the reputed “top 100” American mobsters.

Kennedy expanded the Justice Department’s Criminal Division from 17 to 50 attorneys, with the express directive that they actively prosecute organized crime cases. When Kennedy took the helm at Justice, there had been no indictments against organized crime; within two years, he could boast that nearly 700 indictments and over 600 convictions.

Yet Kennedy suspected that even the considerable tonnage of those agencies was no match for the wiles and tenacity of the mob, so he asked for new weapons in the fight against the mob. Even with thousands of agents and dozens of attorneys targeting those top 100 mobsters, Kennedy never came close to breaking the mob. Part of the problem was that organized crime was, well, organized. Mob bosses were not down on the streets, committing crimes, so they couldn’t be charged, much less convicted, for them.

Having several layers of silence between them and violent criminal acts meant that top mafiosi only rarely went to jail for murder, drug smuggling, or extortion. That didn’t mean they were untouchable—after all, Al Capone went to prison for tax evasion. But Kennedy didn’t want to break the mob one perjury or contempt conviction at a time. Instead, he wanted to smash the mob in the most dramatic fashion possible, which meant creating statutes that would help to indict suspected organized crime bosses as the leaders of an interstate conspiracy to profit from violating the law. 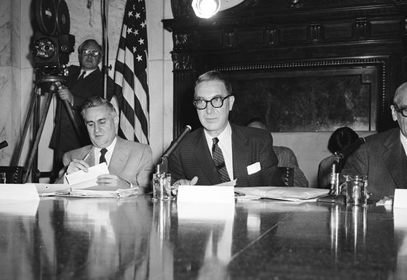 Kennedy’s push against the mob came after more than a decade of sporadic federal interest in organized crime, initiated by Estes Kefauver’s Special Committee to Investigate Organized Crime in Interstate Commerce in 1950. Ultimately, the Kefauver committee benefited the growing gaming business in Las Vegas by focusing public attention on its illegal rivals across the country, though it can be argued that he and others paved the way for Robert Kennedy’s tilt against the mob by alerting the public to organized crime’s danger.

Kennedy believed that gambling was the lifeblood and Achilles heel of organized crime. By attacking the mob’s money, Kennedy thought, he could effectively disrupt and destroy it. And, since Kefauver, federal investigators believed the mob made most of its money in horse race betting, via an information network known as the race wire that connected racetracks and bookmakers. Without the wire, bookies would be unable to offer odds on races. Organized crime profited from a monopoly on the race wire, which is why Kennedy’s proposed masterstroke involved criminalizing the transmission of betting information, rather than merely placing or accepting a wager.

In fact, Congress had been mulling a ban on the interstate transmission of racing information since 1907, though for a variety of reasons anti-race wire bills had continually failed, mostly because opponents argued that police already had anti-gambling laws on the books that they weren’t using, and because telecommunications companies, fearful of being forced to police their wires, objected. As the public became more aware of the threat that organized crime posed, however, law enforcement became more strenuous in its request for new weapons.

None of them got far in Congress. Kennedy’s energetic approach—he had his legislative aides draw up eight new (and old) proposed bills—bore more fruit, however. To Rogers’ legislative roster, Kennedy added a measure to prohibit interstate or international travel that advanced illegal business activities, an enlargement of the class of ex-convicts prohibited to send or receive firearms across state lines, and an act that made illegal the intimidation of witnesses in preliminary government investigations.

Kennedy had behind him more than a decade of revelations of organized crime’s scope and influence—from testimony before the Kefauver Committee to the Apalachin incident, when several reputed mobsters were arrested at a meeting in New York—that suggested he could succeed where so many had failed for so long. Further, Kennedy had the deep and unequivocal support of the president, and a public reputation as an anti-crime crusader.

The attorney general himself used his office as a bully pulpit, arguing that the nation’s biggest problems, which he felt were organized crime, juvenile delinquency, antitrust abuses, and civil rights violations, were due to the American public desire for a quick buck and material comfort.

Kennedy argued that his proposed bills would take down “the bankrollers and kingpins of the rackets” that had thus far been unscathed. He planned to arrest street operatives for actually sending gambling information across state lines, and then use “aiding and abetting” statutes to get the big wheels. He assured Congress that only the federal government was powerful enough to move against the mob, and that it needed these new laws to do so effectively.

The attorney general believed that the transmission by wire of horse racing bets was so essential that “denial of their use to the gambling fraternity would be a mortal blow to their operations.”

Though, as written, Kennedy’s interstate betting ban made the mere act of placing the bet a crime, he stressed that he did not want to prosecute casual or social bettors, but rather would only pursue organized gamblers—the mob.

He had no problem whatsoever with “a social wager between friends by telephone,” but believed that this law was essential for bringing down the mob. Further, the bill that became the Wire Act was consciously limited in scope: RFK made sure that print, radio and television were completely excluded, with the understanding that the Federal Communications Commission was already able to police the airwaves.

And, as Congress deliberated, it focused tightly on the law’s application against those betting on sporting “contests,” even eliciting testimony that professional wrestling would not be subject to the ban, as its athletes were “more actors than wrestlers.” This was a specific law, with a specifically limited scope.

Some questioned whether the new law was truly necessary—after all, RFK’s organized crime task force had already succeeded in indicting 13 members of a national bookmaking network for tax evasion and theft of service (from telephone provider AT&T). But Congress apparently agreed with Kennedy that organized crime couldn’t really be defeated one tax case at a time, and passed the bill. Western Union succeeded in inserting a provision that indemnified themselves from prosecution unless they violated a written notice previously provided by law enforcement.

The attorney general didn’t get everything he wanted; the gaming device measure, the anti-obstruction bill, and the witness intimidation bill didn’t pass. But on September 13, 1961, President Kennedy signed the Wire Act and its companion bills, remarking that he hoped the new laws would “aid the United States government and the people of this country in the fight against organized crime.” The president was confirming what his brother had argued for months: that the laws were not intended to suppress gambling, but rather to fight the mob.

The Kennedy brothers’ intentions, however, ran aground on the reality that Bobby’s central thesis—that small operators would willingly testify against the bosses—was flawed. The small-fry bookmakers ensnared by the Wire Act were more worried about their bosses than prison.

The Justice Department was able to disrupt gambling operations in Newport, Kentucky, and New Orleans, Louisiana, but did not net any national mob bosses. It wasn’t until prosecutors began to use 1970’s RICO (Racketeer-Influenced Corrupt Organizations) statute that they were able to truly tackle the mob’s leadership. But even when the kingpins are jailed, as anyone who has watched HBO’s The Wire knows, new criminals just step in to replace them. New laws could hurt criminals, but they never stopped organized crime.

When, in the late 1990s, prosecutors used the Wire Act to target offshore online bookmakers, they were following, if not the original intent of the law, its practice over the previous 30 years: targeting those who were offering illegal gambling. The Justice Department’s 2011 memo, which restricted its application only to sports betting, and its 2018 opinion, which expanded the law’s scope once more to cover all forms of gambling, including lotteries, both missed the point: that the Wire Act was intended primarily to disrupt organized crime, with illegal gambling only the means to that end.

The Wire Act’s first clause criminalizes those in the business of “betting or wagering” who use a wire communication facility to place bets, or send information that assists in placing bets. That’s a broad brush: presumably, simply announcing that a game will take place could be interpreted as providing information that assists in placing a bet on it.

When viewed in the context of Attorney General Kennedy’s repeated statements that he didn’t wish to prosecute “social” bettors, but only attack the mob via its stranglehold on illegal gambling, it is not so outrageous to suggest that, while it may be appropriate for prosecutors to indict those in the business of illegal gambling under the Wire Act, there is scant justification to use it to prevent states or private operators licensed and regulated by states from offering gambling via the internet across state lines.

Just as police don’t use section 1953 of 18 U.S. Code, which bans the “interstate transportation of wagering paraphernalia” to target those who distribute March Madness brackets or buy lottery tickets on the California side of Primm and cross the Nevada border, they shouldn’t use the Wire Act to prevent people from legally betting online.