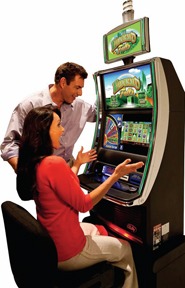 Bring on the razzle dazzle.

Heck, you can even gamble on them.

Manufacturers and industry suppliers race to embrace the expanded machine. They enhance the star performer in gaming’s multibillion-dollar lineup with a new level of customer involvement.

Say hello to the virtual thrill. It’s the result of screaming fans rooting home the simulated winner of a horse race or NASCAR event, for which they qualified by hitting a wagering tier. They can participate in this interlude and quickly resume gambling.

Casinos that use machines to pitch products, and also improve their capacity to reward players. That makes sense. Gamblers know they are being cajoled to stay on games, but if that produces an appropriate reward like an invitation-only event among peers, it has value.

Manufacturing heavyweights Bally Technologies and Konami Gaming offer new products for this climate. TransAct Technologies and FutureLogic have rolled out enhanced printing options that work with casino promotions. And Leap Forward Gaming devised a system to make more than a million older machines compatible with new industry enhancements. Its message: upgrade rather than buy new.

Each outfit found its own corner of this fast-growing, lucrative market.

Las Vegas-based Bally Technologies began using the game screen for multiple purposes about five years ago. It introduced iVIEW and then iVIEW Display Manager, allowing part or all of the screen to be changed into coupon offerings, show tickets, points assessments and bonuses.

Then came the fun. Elite Bonusing Suite, a set of applications that work well on the iVIEW screen, took player participation to a new level.

“A lot of our competition can take over part of the screen and use the displays,” says Tom Doyle, vice president of product management for Bally Technologies, “but we can provide, with the Elite Bonusing Suite, marketing events that really drive revenues. I think that’s helping us close a lot of deals.”

Bonus Tournaments is the latest innovation under EBS. It’s the capacity for a self-administered tournament, right at the site of the slot machine. No fuss, no muss, no attendant. The rollout began several months ago.

“Some of the casinos wanted on-demand type tournaments, in which you didn’t have to have an attendant there to do it,” Doyle says. “If you are playing for a long time at a casino, all of a sudden after 200 wagers, for example, you can get involved in a tournament right now. It has proven to be quite popular. You can do this without anybody having to manage the tournament.”

Another feature within EBS is the Flex Rewards program, an excellent defensive measure. It targets customers who have lost money more quickly than a property expected.

“Let’s say normally you put $500 in the machine and it holds 8 percent, so that win should be $40 for the casino,” Doyle says. “But you come across an unlucky customer who put $500 in and lost $200. Now that person is upset and disappointed and may actually leave the casino.”

Time for an automated, financial back-rub?

“With Flex Rewards, you can suddenly trigger a promo event, like a pumpkin, or a treasure chest, or $50 in free play,” he says. “You are actually rewarding that player at the point of dissatisfaction.”

The operator starts by determining an acceptable bonus formula. After that, the implementation is easy, and the bonuses are automatic. Flex Rewards is especially useful in high-limit rooms where thousands of dollars can be won or lost in a short time. By taking some of the pain away from top players by way of a targeted bonus, the operator can solidify or at least retain player loyalty.

Flex Rewards enables casinos to create rules for targeting bonuses according to club-level, real-time wagering habits. Bonuses can be automatically transferred to players’ CMS accounts and notifications can be placed on iVIEW or iVIEW DM.

Konami Gaming continues to roll with its Synkros system, unveiled at G2E 2012 as the rebranding of the Konami Casino Management System (KCMS.) Its areas includes table games, marketing, player tracking, the cage, and of course, slots.

The company is about to double the size of its Las Vegas office. Konami has systems installations in 200 worldwide locations, and one of its next Synkros installs will occur in Downtown Las Vegas in the next couple of months, according to Michael Ratner, director of product management-systems.

A driving force for Synkros in the slot realm is the Synk Box, located inside the machines and connected to the servers. It enables the downloading of one-to-one bonus games and one-to-many floor-wide bonus games, Ratner indicates. The box also allows for player tracking streaming video, which supports four channels of live streaming, synchronized, across the floor.

The overall Synkros package creates a new visual experience for the slot player, starting literally with his viewpoint of the machine.

“Operators are starting to take advantage of the true-time windowing technology,” Ratner says. “The player now has all the information directly on the screen right in front of him. He does not have to go up or down to a second display to get the information. His eyes are already on the game and you are putting the system in the same place they are already looking.

“Typically, this information would be right above or below the game monitor,” says Ratner. “Now it’s right there. So if you want to offer bonusing games, any birthday wishes, concert information, etc., that can be communicated right in front of the player’s eyes.”

The innovation not only makes messages easier to spot, but to read as well. The letters are large and centered.

Whatever casinos wish to communicate to players can now be done more easily. The restaurant reservation. The bus that leaves in 20 minutes. Or the consolation prize.

“It is all well and good that you know Bob Smith, for example, has bet $500 in the last hour,” Ratner says. “Now you want, as a reward for that time, to give him $10, but if you try to do it after his (reward or loyalty) card has been pulled out, it’s too late. With Synkros, you can send him a message in real time. The money can be entered right into his account.”

Full-screen vision also enhances the floor-wide bonusing system, one of the newer assets of Synkros. Patrons can select stock car and air races, adventures or lucky numbers as part of their reward for play.

Synkros is multi-dimensional. Its mobile app feature, for example, provides casinos an instant snapshot about what games are doing well. This produces information that ultimately finds its way into targeted messages for customers on the full screen. Synkros also has a component designed to serve table games and provide marketing information.

Leap Forward Gaming has been true to its name. The Reno, Nevada-based company made recent major installation breakthroughs in Macau and the U.S. with its SaffariNet Patron Display Interface (PDI) picture-in-picture multimedia ecosystem technology. It most recently gained an install at the Wynn, a Wynn Resorts Limited property.

Ali Saffari, the company’s founder and CEO, says the immediate market for this product is about 1.2 million machines. Many of them are several years old, but can be upgraded to wireless and picture-in-picture capability. That can offer a major financial savings to operators, he says.

“In this economy, nobody can afford to replace all their machines,” Saffari maintains. “The average cost may be $15,000-$16,000 for one machine, but in some cases you can go up to $22,000. By having our PDI technology, these machines can still be quite useful to the operator, for a fraction of the cost of purchasing new machines. Our technology works with everybody—IGT, Bally Technologies, Aristocrat, etc.

“We are Switzerland,” he adds, laughing.

Well, Switzerland is on a roll. The latest Eilers-Fantini quarterly slot report denoted a surge for the company between the first and second quarter of 2013. It soared to second place behind Bally Technologies among casinos that soon plan to use picture-in-picture technology. Leap Forward’s expected market penetration grew from 2,000 machines to more than 17,000.

The PDI system utilizes a small controller box inside the machine and a wireless candle on top of the machine. It is coordinated with a software system that connects to the back of the house, allowing operator flexibility.

“They have all the agility they want,” Saffari maintains. “They can change the campaign, the bonusing, the marketing, the multimedia aspects, whatever they want, immediately, for their entire floor.”

“The goal is to provide a benefit for everybody. The operator wants to increase the drop and also wants the captive audience of the player sitting at the machine (looking at offers, for example). The player wants to have all his desires fulfilled, whether it’s sports wagering, reviewing property amenities, getting a free buffet if he just played $400, etc. We have more than 30 features and capabilities for couponing for our customers.”

Saffari was a longtime engineering executive for IGT, participating in numerous innovations including ticket-in/ticket out and Megajackpots, before launching Leap Forward in 2010.

FutureLogic’s PromoNet ties into the magic-at-the-machine process. Its couponing solution debuted at G2E in 2011 and has gained installs around the world in the last couple of years. As the excitement of instant rewards increases, so presumably will the demand for coupons to print them.

The Glendale, California, company’s four-year development of PromoNet expands its gaming impact. Already known for exceptional printers, FutureLogic brought an element of immediacy—coupons—to the floor. The product has two major categories. Its “bank” operation concerns a group of isolated machines. The operators can arrange to have adapter boxes placed inside the games quickly, usually inside of a week.

The PromoNet “campaign,” dedicated to most or all of the casino floor, allows the casino to place the product into as many machines as it wants.

Another benefit occurs in the growing online area. A barcode on a coupon can enable a player to reach the casino’s website via his smart phone and then redeem rewards. This process also extends to a person’s home computer. The player can type in the barcode number and reach the same website.

PromoNet works by way of a dual port inside the slot machine. One connection fits the game, the other handles promotional couponing.

It’s been quite a year for TransAct Technologies, based in Hamden, Connecticut. The company will bring a strong report card for Epicentral into G2E, with plans for continued installations.

Its Epicentral couponing solution went into Northern Quest in Spokane, Washington and Wind Creek in Atmore, Alabama during the first week of April, swelling its installs to about 4,500 and counting.

The company develops printers, terminals, software and other products for many industries, including gaming, food safety and hospitality.

TransAct continues to combine printing and couponing effectively. It unveiled the Epic 950 printer in the mid 2000s. It was a ticket-in/ticket-out printer, but always had a secondary port, because it was designed with couponing in mind. The company then brought out Epicentral, the software system that connects to the Epic 950 and prints TITO tickets, coupons and promotional offers to players on the game.

Epicentral connects with the casino server and with management systems, food and beverage, etc.

“It’s very exiting now that we have a total of three properties running the system with about 4,500 games,” says Tracey Chernay, executive vice president of sales and marketing for TransAct Technologies. “There are so many ways the casinos can use Epicentral, to reward players instantly or give them tickets for future drawings.

“We are live across the entire casino floor. Every game on the floor is turning out a coupon.”

Every coupon is an invitation, offer, or reward. Every reward is its own form of public relations.

This company, like Konami, Bally Technologies and Leap Forward Gaming, has not only pleased the operators. It has grasped the customer end of this equation.