As the ultimate tourist destination, Macau’s Cotai district means a stronger future for the Chinese SAR. 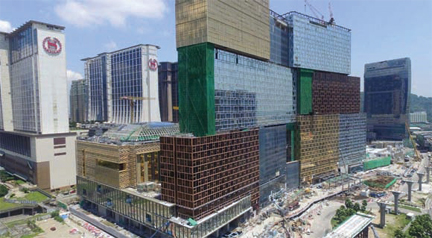 In the folklore of the gaming industry, it’s an oft-told tale: In 2002, Las Vegas Sands honcho Sheldon Adelson got his first look at a swampy landfill in the Chinese territory of Macau, and saw the next Las Vegas.

Well, not quite. At first, Adelson was less than impressed by a two-square-mile tract of what he called “the boonies,” wedged between the islands of Taipa and Coloane. But with China about to welcome global gaming operators for the first time, the entrepreneur Fortune magazine called “the man with the golden gut” jumped in with both feet, developing a sister property for his flagship Venetian in Las Vegas.

Make that a big sister: at 10.5 million square feet, the 40-story, $2.4 billion Venetian Macao, which opened in August 2007, is still the largest casino resort in the world. And today, the former landfill Adelson christened the Cotai Strip is home to billions of dollars’ worth of investment.

At the opening of the Parisian last September, Adelson compared Macau to Las Vegas in its evolution from strictly gaming to a more well-rounded tourism-based economy. “Before our very eyes, Macau is making a similar transition,” he said, with “a wide variety of activities, attractions and amenities for people of all backgrounds, income levels and interests.”

It’s business as usual for the 83-year-old billionaire, a former trade show organizer whose COMDEX computer expo made a mint and gave him a springboard into the gaming business. In the 1990s, when Adelson built the Sands Expo Center followed by the 3,000-suite Venetian, he introduced then-unheard-of amenities that now are standard, like mini-bars, cable TV and high-end restaurants. Naysayers who scoffed at the plan were soon silenced by thundering herds of tourists who came not only to gamble but to stay, to play and to shop at the Venetian’s famous Canal Shoppes.

“In Las Vegas now, non-gaming revenue accounts for about two-thirds of the city’s revenue, with business travel during the week and leisure tourists during the weekend,” says Ron Reese, senior vice president of marketing for the Las Vegas Sands Corp. “It was a heck of a model for Cotai.”

It was also a master stroke of prognostication. In 2014, seven years after the Venetian Macao opened in Cotai, Chinese President Xi Jinping cracked down on corruption and money laundering in Macau, sending high rollers into hiding and the local economy into a tailspin. For 26 punishing months, the decline persisted; some $46 billion in market value was wiped out in 2015 alone. Calling for an end to Macau’s reliance on gaming, the government issued a Five-Year Development Plan ordering the city’s six major gaming concessionaires to reap at least 9 percent of revenue from non-gaming amenities by 2020.

The operators met that benchmark way ahead of schedule. According to Macau’s Statistics and Census Bureau, the industry brought in a total of MOP 23.9 billion (US$3 billion) in non-gaming revenues in 2015, a ratio that continues to hold, thanks in part to Adelson’s prescience.

“It was his vision for Las Vegas that led to what’s happened in Macau and what’s happening in Cotai,” says Reese of his boss. “He sees around corners that others normally can’t see.”

Despite investor fears that new resorts on Cotai would take a bite out of casinos on the Macau peninsula, so far that hasn’t been the case, says Union Gaming analyst Grant Govertsen. “What we’re seeing is flattish revenues at the legacy casinos, while the new properties are effectively capturing incremental growth in the market.

“The good news is that mass-market has generally been leading the recovery. It’s good for the casino operators simply because that’s a higher-profit margin business. And it’s good as it relates to the government mandate to diversify gaming away from VIPs.”

“Because critical mass is important, you’ll lean more towards people choosing Cotai over downtown,” says Fitch Ratings analyst Alex Bumazhny. “Longer term, it will be interesting to see if both can coexist in a viable sort of way.”

While business on the peninsula has proven “very resilient,” largely due to a surge in VIP play that began late last year, “you need growth in the mass market to make the whole story work,” says Bumazhny. “We’ve seen increased visitation. We’ve seen increased length of stay. That supports the whole thesis that as the middle class grows in China, Macau will grow and benefit. Our long-term positive outlook on Macau is really anchored in mass-market.”

Growth of mass gaming and non-gaming aside, he doubts that Macau, a former Portuguese colony that was returned to Chinese control in 1999, will ever become the next Vegas.

“Las Vegas is unique in the sense that it has a lot of millennials coming to clubs and businesspeople coming for conventions, but that took years to develop,” Bumazhny says. “I’m not sure Macau is going to diversify that way—though if it can, it would be healthy.”

“It’s hard to imagine a day when non-gaming in Macau constitutes even close to half of revenues,” says Govertsen. “Gaming revenue, that’s the base. But over time, non-gaming should be a steady grower. In the next five, 10 or 20 years, you’ll probably see a lot more experimentation on the part of casino operators.

“They’re under the gun to increase diversity,” he says. “And that means more non-gaming.”

Another early adopter of a broader-based, gaming-plus business model in Macau was Galaxy Entertainment Group, which opened its Galaxy Macau Phase I in Cotai in 2011. Global Gaming Business talked to GEG President Michael Mecca about the past, present and future of Cotai and its impact on global jurisdictions.

GGB: How is the market changing in the era of Cotai 2.0?

Mecca: Across Asia, leisure travelers are becoming far more sophisticated and discerning. They expect a wider choice of hotels, dining, shopping and entertainment experiences, which in turn drives up quality and service across the industry.

Since 2002, when gaming was liberalized in Macau, it’s witnessed remarkable changes. Visitation has grown from 11.5 million in 2002 to almost 31 million in 2016 with guests staying longer. It’s the success of places like Cotai and integrated resorts such as Galaxy Macau that have awakened and encouraged many jurisdictions across Asia Pacific to look at liberalizing their markets to take advantage of the tourism boom.

The peninsula and Cotai successfully coexist because they offer different customer experiences. The peninsula has a certain unique appeal to day-trippers who enjoy its ease of accessibility and clustering of properties. Despite new resorts coming online in 2016, our StarWorld property is as popular as ever, with 99 percent hotel occupancy in Q4 2016 and Q4 adjusted EBITDA increasing 14 percent year-on-year and 19 percent quarter-on-quarter to HK$637 million (US$82 million).

How have you attracted more mass-market gamblers, mainstream tourists and even families?

We added 2,000 rooms and suites across three brands: Ritz-Carlton, JW Marriott and Broadway Hotel; unveiled a 200-store shopping mall, the Promenade, and a 3,000-seat Broadway Theatre. We expanded the Grand Resort Deck to over 75,000 square meters of gardens and pools, complete with a 575-meter Skytop Adventure Rapids. We increased our food and beverage offering to over 120 outlets, from casual fare to Michelin-star fine dining.

We allocate tables to various segments so long as they’re able to push yields up, no matter whether they are in junket VIP, direct VIP, premium mass or mass business.

Are most of your guests from mainland China?

Approximately 66 percent of visitors to Macau come from the mainland and 20 percent from Hong Kong. But in recent years, we’ve seen greater numbers of international tourists from North Asia, Southeast Asia, the Americas and Europe.

What does Galaxy plan next on Cotai?

In recent years, Macau has shifted from VIP to mass market, attracting far more middle-class families in particular. With their longer length of stay and higher spend compared with day-trippers, we’re continually reviewing our development and operation plans to maintain our competitiveness. In the years ahead, we’ll continue to focus on mass-market family customers as well as comply fully with the Macau SAR government’s long-term vision to diversify the city’s offering and economy. GGB: MGM is soon to open one of the final megaresorts in Cotai. Are there advantages to being last?

Rogers: It’s an advantage in the sense that we could take a pause and wait for some market improvement, which we’re seeing year-on-year. We’ve seen what’s working and not working at some of the other properties. In addition, Cotai is a developing area, and it does help to have more critical mass, which drives greater foot traffic.

Talk about the design of the new resort.

It’s an iconic building in rose, white and yellow gold—we’ve described it as stacked Chinese jewel boxes—by KPF, the award-winning architect that built the International Commerce Centre in Hong Kong and the Shanghai World Finance Center. We wanted something that’s never existed anywhere else in the world, something unique to help Macau develop as a global destination. Obviously, MGM Cotai is a destination you must see when you’re here.

How does this resort answer the government mandate to diversify?

MGM is a leader in entertainment and non-gaming offerings. We haven’t given out a lot of the details, but I can tell you we’ll have something called the Spectacle, a big open area loaded with exciting digital content, covered in glass similar to our Grande Praca or even the Bellagio Conservatory. We’ll have a dynamic theater, the first of its kind in Asia that can change its configuration for different kinds of events, from fashion shows to boxing matches to traditional theater productions.

Are you going after a piece of the VIP business? Do you know your table allotment?

We must apply for those gaming tables, and it’s still too early to have the discussions. On the VIP side, even in Macau the bulk of our profit comes from mass gaming, probably over 80 percent. At MGM Cotai, we have an opportunity to work toward diversification in entertainment, and that’s the trend in Cotai.

Do you feel long-term confidence about the market?

In light of market changes, we’ve made some pivots to focus more on mass-driven market and diversification. All price points are available for all types of visitors. Though there was a short-term hiccup in the market, we’re here for the long term.

GGB: Would operators in Macau have thought twice about new developments if they knew they were heading into a two-year downturn?

Bain: While the downturn ran deeper than most foresaw, all operators were unwaveringly bullish throughout the development process and revenue declines. Their eyes have remained on the long-term prize.

The new resorts broaden the visitor demographic from mainly a table-game day-tripper to an overnight guest seeking multiple forms of entertainment. While the market won’t change immediately, each new opening provides fresh amenities and affordable rooms for mass players. Infrastructure projects such as the HK-Macau-Zhuhai Bridge and light rail system should provide more mass and premium-mass visitation momentum.

What about the impact on the peninsula?

The peninsula isn’t closing down, but we believe only those operators that are reinvesting in their properties there have a good chance of being successful.

Who will be the big winner on Cotai?

Obviously, the Cotai growth takes from Wynn and MGM’s peninsula operations, both in table allocation and visitation. Still, those operators get into a new market of sorts as they open up in Cotai.

At this point, we’re cautiously optimistic, and believe CY17 gross gaming revenue will end at plus-9 percent. While we anticipate volatility, we cannot find a more dynamic and longer-term, better gaming market opportunity than Macau.