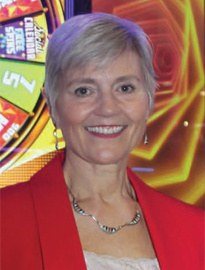 Believe it or not, the trackball played an important role in the emergence of Elaine Hodgson’s company. Hodgson explains how the company utilized an emerging technology to push its Golden Tee golf game and its Capcom bowling game in an industry where joysticks were the norm.

“We found that the trackball was much better at simulating the bowling game that we did originally, and then the golf game afterwards,” she explains.

And that strategy continues today with the innovative slot-maker that has emerged in the Golden Tee producer, Incredible Technologies.

“We’ve always been good, even today, to take emerging technologies that get to the price point of the industry that we are in, and use it to its best effect,” she says.

Despite having a successful company producing amusement games, principally Golden Tee, which was to become one of the premier bar amusement games in the business, Hodgson said they decided to enter the gaming industry at a time the amusement games seemed to be faltering.

“We were a little late to the party,” she points out. “Our competitors like Konami, Bally and WMS had decided earlier to get out of the amusement business and go into the home consumer markets, and/or slot machine markets. We decided to get into the slot business because it utilizes a lot of the same core competencies as the amusement games.”

But Hodgson says IT underestimated what it would take, admitting to being a little naive.

“Maybe we were a little arrogant, because we had actually done this before in the coin-op industry,” she explains. “We were nobody, and we did compete with the big players and found our niche and were successful, using innovation that truly nobody else was doing. So, we got in and thought we could do something similar in the slot machine industry. However, that industry is much bigger, and those competitors are much bigger, and being naive in the ways of regulations, it was a longer ramp-up than anticipated.”

“We had to be different, so that people would play our games over our established competitors,” she says, “so we drew from our arcade experience. And quite honestly, we probably did that even more than we should have, and we didn’t consider the look and feel that slot players

really want. But we got our act together, and so we still have that entertainment, arcade flare in all of our games, even though we have the look and feel that slot players like.”

One of the things IT tried to do was give the players a choice of the volatility they desired.

“Our very early games did that, which seems really clever, but it wasn’t necessarily understood or desired by our players,” she says. “We learned some things about how a given theme seems to attract either the low-volatility or the high-volatility player. High-volatility players don’t want fluffy bunnies. They want action. So we learned some lessons there, and so now we just target a theme for a given volatility. We would like to be successful in all those market segments, but I’d have to say that so far, we’ve been most successful on the time-on-device, entertainment arcade-style game. Though, I’m certain we’re going to have success in the high-volatility market as we move forward.”

As all slot manufacturers know—and IT learned the hard way—the secret to successful slot games is the math. But IT had an ace up its sleeve.

“My partner, Richard Ditton, has a bachelor’s in mathematics and a master’s in computer science,” Hodgson says. “He looked at games, walked around, watched games, looked at player behavior and analyzed successful math models and not-so-successful math models. He came up with theories that he uses to determine if a math model that we introduce will be successful or not. And he made our hit rate go way up from what it was, and while it’s not at 100 percent, it’s pretty good. So yes, math is king, and everything starts with math, and I wish we had known that from day one, but we know it now.”

For a small company, IT stands tall in the quarterly Eilers-Fantini Slot Report, which breaks down slot performance in many different categories. IT is up or near the top in most categories where it competes.

“Eilers is like the report card that we all watch; we look for it coming in our mailbox, and so it is a great thing,” she says. “But we respect that it’s very difficult to stay there. When you’re at the top, there’s only one way to go, so we work hard to stay there. But, it’s the entertainment industry and the customer is fickle, and they change, and so we know we have to keep on top of it.”

Hodgson also values the people who keep them there and praises all members of her team.

“We value honesty,” she says. “We value people’s contribution, we are good with people’s time; we let them do things for their family when they need to. We ask for work when we need it. We want to win; we want to feel, as a team, that we’re contributing to the industry in creative ways that make it go further than it has gone before.

“At the same time, we like to have fun at what we’re doing, and we don’t take ourselves too seriously. We care about the customer and the product and ourselves, and we’re not playing the stock market game. We’re very focused on the core of the business.”