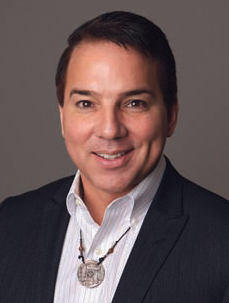 Richard Sneed was elected vice chairman of the Eastern Band of Cherokee Indians in 2015 and principal chief in 2017, and re-elected in 2019. Sneed is dedicated to diversification of the tribal economy, and has led an effort to enter commercial gaming, which has occurred with the purchase of Caesars Southern Indiana.

GGB: How did the Cherokees get into gaming, and how have you achieved the success that you’ve had so far?

Chief Richard Sneed: We first began around 1994, when the initial approval was given by tribal council to go into Indian gaming. It wasn’t something unanimous, even among our tribal citizens. There was some pushback; in fact, there was a group that said they, point-blank, did not want gaming. But I don’t think anybody could imagine our tribe without it today, some 26 years later.

What was the economic state of the tribe prior to engaging in the gaming industry?

Prior to gaming, really our only source of revenue was tribal bingo, which we were very proud of. It was the world’s largest; it seated 5,000 players at the time. That was only open two weekends a month. And so, other than that, tourism was our economy, and of course, that’s seasonal. So, really, once the last leaves fell off the trees in October, that was it. Everything shut down. It was a ghost town, and there was a lot of unemployment, and a lot of poverty as well.

Tell us why you decided to partner with Harrah’s initially.

There was an RFQ sent out, and there were three firms that had responded. At that time, Harrah’s wasn’t part of the Caesars family. Casino Magic responded, and I don’t even remember who the third respondent was; I’d never heard of them either. And interestingly enough, I grew up in New Jersey, because my mom’s from there. I’ve actually worked on the Atlantic City Boardwalk, as a teenager. So I was familiar with Bally’s and Harrah’s and Trump. And so it seemed to me to be a no-brainer to go with Harrah’s, and I was very grateful that the tribe did at that time.

Has anything changed now that Harrah’s is a member of the Caesars Entertainment family?

We still have a tremendous relationship with Harrah’s, even under the Caesars umbrella, which is why we’ve stayed with them in our management agreement for 24 years now.

Harrah’s Cherokee was a success right from the start. It was clear that this was going to be a big revenue stream for your tribe.

Absolutely. I don’t think anybody could have anticipated how successful it was going to be. I think on the opening day, the casino actually ran out of cash. So, that’s a pretty good problem to have. We were not prepared for the influx of people, and thought it would develop over time. But it happened right out of the gate, and it really hasn’t stopped since.

Let’s talk about Caesars Southern Indiana. There have been a few tribes that have successfully entered the commercial market. Why did your tribe decide to pursue this opportunity?

It’s a matter of looking toward the future and understanding that the attitudes toward gaming in this country are changing rapidly. And we wanted to be well-positioned, so that when those markets opened up, we would be able to compete for gaming licenses in those emerging markets.

So this could lead to other opportunities, if this one is successful?

Absolutely. The idea that we can just rest on our laurels with our very successful Indian gaming operation isn’t wise. Our people are dependent upon the services that we provide, and we have a very robust health care system here, a very robust education system, and we’re very proud of our post-secondary education system, where we pay for our tribal citizens to go to university, all the way through Ph.D. We want to ensure that those benefits exist seven generations into the future. And so we can’t just rest on our laurels and expect that things will always remain the same, because everything’s always changing.

You decided to retain the Caesars brand. Is that because the Harrah’s brand in North Carolina has been so successful for you?

Well, there are several factors. Obviously, the very successful relationship we’ve had with them. But more importantly, the Caesars Rewards program. We want to continue to retain our players, and ensure that we’re not losing our players to other brands. And so, the brand loyalty is important, the rewards program is important, and the relationship has just been phenomenal over the years, and we want to continue to foster that relationship, because it’s mutually beneficial.

You put together a great team, starting with the former Caesars regional president, Scott Barber. He’s got a lot of experience, and the team itself has a lot of experience, particularly in your specific market. What is your expectation when you do take over the property?

We want to keep continuity with the existing staff. We didn’t want to come in and create upheaval by changing leadership. So, we’ve kept the leadership team that we have there, and all the employees. There are some improvements we want to do on the property—just some upgrades, capital improvements, especially the hotel, because the hotel is older. We’ve been very successful at our property here in Cherokee, with very high customer satisfaction ratings. And so, we wanted to foster that same type of behavior and outcomes at the CSI property.