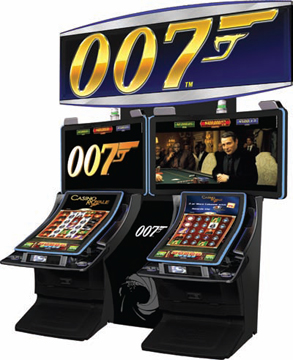 This latest game in Scientific Games’ franchise of slots themed on the James Bond films features the 2006 film Casino Royale on the supplier’s immersive Gamefield 2.0 cabinet. The 2006 film, the first to feature Daniel Craig as Agent 007, is presented in various clips built around both mystery base game bonuses and second-screen events.

The base game is a five-reel, 25-line video slot with one credit per line plus a five-credit bonus bet to activate all the features. The base reel array is five by five—five spots on each reel.

The base game includes a mystery “Cloning Feature” in which two or more columns of symbols may switch to an alternate set of reels before the spin, with all symbols on the selected reels stopping on the same symbol.

The main bonus feature is centered around the high-stakes poker game depicted in the film, and can lead to one of two progressive jackpots. The game is available both with stand-alone progressives and in wide-area versions on one of two Scientific Games links, Cash Connection (jackpot resetting at $400,000) and Reel Adventures ($200,000 reset).

Six or more scattered chip symbols on the reels trigger the Chip Feature. Each chip symbol will hold in place for the duration of the feature. Players are awarded “Chip Respins” in which the unlocked positions re-spin, potentially landing more chip symbols. After all re-spins and upgrades, the chip symbols award prizes according to their color, white, red, black or gold. White chips award 25-50 credits; red, 100-200. Black chips spin a “mini-reel” to award 500-1,000 credits.

The gold chip triggers the 007 Bonus, which can lead to one of three progressives. Each chip awards a deal of cards that can award up to 10,000 credits, a “Casino Bonus” of poker hands, or the Minor or Major progressives.

Scattered bonus symbols on two or more reels expand and fill each reel with “BONUS.” A “Bonus Respin” feature then occurs on reels that contain only bonus symbols and blanks. Bonus symbols lead to the Casino Bonus, which features three to five hands of poker.