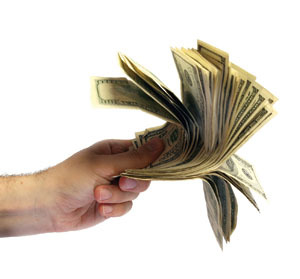 Casinos make a lot of money off of slot machines-including video poker, keno, blackjack and a few other machines that are typically found on the slot floor. To keep players “coming back for more,” casinos since the beginning of the modern gaming era have resorted to various types of incentives (bribes). There are numerous reasons for these incentives, but the basic one is to encourage players to come in and lose more money to the casino.

The two major forms of incentive are cashback and comps. Before going any further, let’s delineate these terms.

Cashback is a cash rebate going to the players based on their play. It can be based on the same formula across all machines in the house, have two distinctive categories (slots versus video poker, where video poker receives less cashback due to its lower house edge), or numerous categories based on theoretical loss or other factors.

Cashback based on coin-in gives the players a direct, understandable, calculable reward. It can be easy for your staff to explain to your customer. Basing cashback on theoretical gives a casino considerably more flexibility to assign specific rebates to specific games-and even change them without notice (though the customers will notice this more than you may think).

The biggest drawback of the theoretical-based system is that it is very difficult for the slot club staff to explain to the customer. On more than one occasion, someone has said to a player, “The cashback is based on what you lose.”

Which one do we recommend? It is whatever your customers are used to, with two caveats. Not all forms of cashback offered by your casino (see below) have to be based on the same system (same-day can be based on points, mail rewards on theoretical). Also, whatever rewards you do base on coin-in, it may be next to impossible to change them to theoretical at a later date.

Years ago, cash rewards fell conveniently into two categories: “same day,” where the player could pick up his cashback the same day he earns it; or “bounce-back,” where the player got a voucher in the mail that was redeemable sometime in the future. Both of these categories still exist, but there are now additional ways to distribute cash to your players as well.

Many casinos now offer a monthly cash mailer (sometimes in lieu of same-day cashback, but more frequently in addition to) with different tier levels of cash a player can earn, based upon either coin-in or theoretical in some earlier time period. This is different than bounce-back cash because with bounce-back, the amount the player may receive is unlimited as long as he put lots of dollars through the machine. With monthly mailers (usually two or four coupons, each of which must be redeemed on a specific dates), there is a maximum “top mailer” that only the highest 5 percent of your customers receive.

There are also “incentive checks” where a player may receive a specific amount (perhaps $20, perhaps $20,000) but it must be played during a specific time period-which can be a few hours, a few days, several months or anywhere in between.

Although this is “cash,” it may or may not be considered “cashback.” Cashback is a long-term entitlement, whereas these incentive checks are frequently specific to a promotion (or a special marketing effort by the casino to attract specific customers or demographic) and are quite flexible.

Whenever a casino’s marketing department believes that throwing money at the problem is a good way to solve it (and it occasionally is), incentive checks may be in the mail shortly.

Many casinos now offer “free play” (instead of cash paid out of the cage or slot club booth) for some or all of their cashback programs. Free play is typically downloaded at (almost) any machine with a PIN.

It usually must be played through at least once. The advantages to the casino for this are that there are fewer labor costs associated with awarding the cash, and once physically at the machine, many players do not have the discipline to play the money through once and then stop. There can be player resistance to this, especially if a player feels that he is being forced into a specific course of action, but similar to the introduction of cashless machines, this can be overcome by marketing the benefits (get your rewards without the line) and using a little sensitivity, or maybe a bribe.

(Please remember that if your players thought everything completely through on a rational basis, you would have a lot less business.)

Unfortunately, one of the reasons for the increased usage of free play is the mistaken assumption that “free play” is “free” to the casino, due to the high number of players who play it until they lose it. While it is cheaper than handing out cash, free play still can be a costly incentive if not monitored.

Another downside of free play is that one spouse (or significant other, or even a friend) will pick up the free play for both, which may mean one person visiting the casino rather than two. Casinos typically aren’t worried about spouses using each other’s free play, but there are teams of players doing this in some locations, which is not what the casinos had in mind.

There are more ways to deal with comps than there are with cashback. The comp accounts may be open (i.e., transparent to the player) or closed. There may or may not be additional discretionary comps available. Comps may be based on actual loss rather than theoretical loss. Sometimes comps are “trip only,” and sometimes they are “lifetime,” assuming some minimum amount of ongoing play.

The big advantage of open comp dollars accounts is that it allows more players to appreciate your rewards (instead of just the hard-core comp-consumers). Plus, it cuts down on the number of small comp requests going to your hosts or supervisors-thus allowing them to spend more time with the bigger fish. However, due to the general nature of gaming and players, it is always good to have some method that allows your staff to provide additional comps to big players or developing players.

Table game players, even in new markets, can be an especially traditional crowd regarding comps. Very few casinos give same-day cashback to table game players, and many who have tried it have stopped. Instead of relatively small amounts of cash (that can be complicated to calculate) and even comp dollar accounts, table game players seem to still prefer discretionary comps coming through direct staff interaction.

What do the players want-cashback or comps? Unfortunately, the answer is both, and more of both-which means that you have to use your professional judgment to provide a diverse yet manageable program.

A casino that offers only cashback (especially same-day cashback) may be needlessly exposing its staff to aggressive comp-begging, and is probably not creating enough future visit incentives. Even though a player did what you wanted and played away all the cash rewards you gave him, he is not going home with a positive feeling about that part of your rewards program.

A free meal at your casino is (hopefully) more memorable, but a comp-only program can get boring rather quickly even in the best casinos-and can be a disaster if your restaurants (or other amenities) offer “nothing special,” and your competitors offer cashback.

Casinos with a “sleep-at-home” locals crowd do not need to give away (i.e., reinvest) as many comp dollars as casinos catering to “sleep and eat at the property” non-locals. You need to be reasonably competitive overall with your neighbors, although there are many areas (especially machine selection and customer service) other than cashback and comps which will successfully differentiate your product.

Each market has a different typical mix between cashback and comps, as operators who were successful in one location have frequently (and expensively) found out when they opened up in another location and thought they knew everything.

In general, video poker players care a lot more about cashback than slot players do. The reason is simple. A strong video poker player can analyze the return of a machine at a glance (i.e., one machine returns 99.54 percent; another 97.30 percent; etc.) It is easy for these players to add the return on the machine to the cashback rate to get the total return. Slot players can’t do this, because they usually have no idea of how much the game returns. If a player can’t know (and for the most part does not care) whether a machine returns 92 percent, 94 percent or 96 percent, knowing whether the cashback rate is 0.20 percent or 0.80 percent is largely worthless.

Cashback versus comps is an ongoing and ever-changing discussion influenced by many factors, including market maturity, available technology and economic conditions (such as the current situation of increased unemployment, as well as increased food costs, which can make comp dollars more expensive for the casino).

In the last year or so, several casinos added additional cashback options. For example, in the Las Vegas locals market, Station Casinos recently instituted a program where the players can redeem comp dollars (earned after the program was instituted) for free play, thus allowing players to turn points normally used for comps into cashback if they like.

It was a very popular decision, though many players redeemed only some of their comps for free play because the casino gives a better redemption rate for comp dollars (600 points equals one comp dollar for certain categories of comps) over cash (1,000 points equals one free play dollar), and there are additional discounts when you use points (such as a 25 percent-75 percent discount on the buffet, depending on tier level). All in all, a nice choice for the players to make.

A struggling casino in Laughlin is currently running a three-month promotion where players can redeem all comp dollars for cash-including any previously earned comp dollars. While this is also very popular with players, especially those with large balances of basically worthless comps, it strikes us as a needlessly expensive promotion.

Regardless of what their financial statements say, a significant percentage of comp dollar balances were never going to be redeemed, and many of those dollars are held by customers who have long lost any potential to be consistently strong players (at this casino or even any other casino). Of course, this policy increased business (as would passing out $100 bills at the door), but they would probably get the same benefit by allowing only currently earned comp dollars to be redeemed-and it would cost them a lot less money.

Today’s casino managers have many more tools available than their predecessors in creating an effective (and much more fair) reward program, but the basic goal is still the same: to encourage the player to visit their casino again, and to play more while they are there.

And as no two players, casinos or casino markets are exactly alike, there is no hard-fast answer as to what works, except knowing what your choices are and what you and your players best appreciate.
Jeffery Compton, the recognized expert on players’ clubs, is president of CDC, one of the industry’s leading marketing consulting firm. He can be reached at [email protected] Bob Dancer is a gaming analyst and the world’s pre-eminent video poker expert. He can be reached at [email protected]