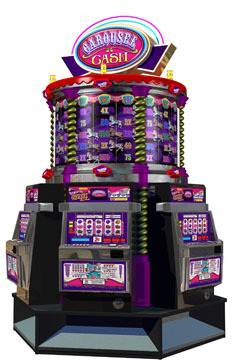 This is the latest entry in AC Coin’s “Big Roller Series,” the group of slots that grew out of the blockbuster hit “Bankroll.”

Bankroll, of course, was the first game with the scroll-style bonus event, a mechanical scrolling top-box device resembling a sheet of banknotes that would roll and stop on a bonus amount. The Big Roller Series places the concept into a community-play bank, with six five-reel steppers arranged in a carousel under a giant version of the scrolling bonus device.

A “carousel,” in fact-the kind with horses at a carnival-is the theme of this latest entry in the series. Carousel Cash positions six five-reel steppers under a giant scroll depicting 14 different award values, including 10 amounts ranging from 40 coins to 200 coins, and four multiplier values, from 2X to 5X.

The base games are the five-reel, 20-line version of IGT’s Double Diamond, or of Triple Stars (pictured).

The math and timing are worked out so more often than not, more than one player is entering the bonus at once. When the first game triggers a bonus, there is a 15-second window in which others can join in before the bonus apparatus starts spinning. The bonus frequency is around 40 spins on average for any individual slot.