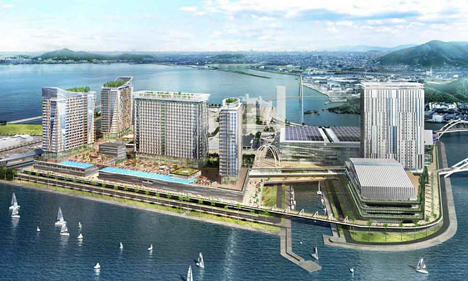 Clairvest’s proposal for the Wakayama IR (pictured in an artist’s rendering) is estimated to be a US$4.21 billion investment, built on an artificial island called Marina City

In late September, the group chosen to develop an integrated resort in Wakayama, Japan announced a new member of the consortium: Caesars Entertainment.

Clairvest Neem Ventures, a unit of Vancouver-based Clairvest Group, disclosed that Caesars had joined its partnership, replacing France’s Group Partouche as would-be operator of the US$4.21 billion project. Together with the local government, they will jointly bid for a license to site, develop and operate an IR at Wakayama’s Marina City.

In a news release, Clairvest said Caesars joins the consortium “in full compliance with Japanese law and with no capital commitment.” It called Caesars “one of the gaming industry’s best-known brands and an elite casino operator” and referred to the overall entity as “one of the most experienced IR development and management teams in the world.”

“We are thrilled to partner with Caesars Entertainment,” said Eddie Woo, CNV representative director. “Caesars and CNV share a common vision for Japan’s national IR program. Not only will it serve to enhance the economic recovery from the Covid-19 pandemic through increased international visitation, but we are confident that together we can create a resort that provides significant local economic stimulation in Wakayama prefecture, throughout the Kansai region and the rest of Japan.”

“Caesars is an iconic brand, and we are proud to partner with CNV to bring it to Japan,” said Tom Reeg, CEO of Caesars Entertainment. “We believe our experience blends perfectly with CNV’s and look forward to creating something special with them for the Kansai region.”

Caesars’ history in the region has been on and off. In August 2019, the company withdrew from the Japan race to concentrate on the merger. Last February, the combined company revealed it disposed of Caesars’ stake in a Korea casino hotel project, with Reeg joking, “We sold it for some barbecue pork.” 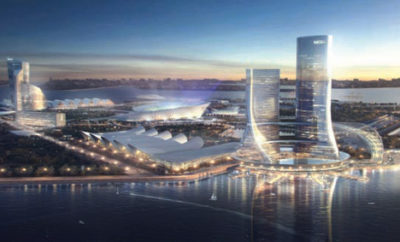 In nearby Osaka, another U.S. gaming giant, MGM Resorts International, has joined with Japanese financial conglomerate Orix to seek an IR license on Yumeshima Island. Both cities are about a 40-minute drive from Kansai International Airport. And while Osaka is the population center, with 2.4 million residents to 375,000 in Wakayama City, Wakayama Governor Yoshinobu Nisaka insists the proximity won’t hurt, and could create a casino cluster that benefits both operators, as in Macau, Las Vegas or Manila’s Entertainment City casino zone.

Cohen believes Caesars wants to seize the opportunity in Japan that it missed in Macau. In 2001, the company then known as Harrah’s Entertainment passed on a bid for a Macau license, and in 2007 blundered with the purchase of a Cotai golf course, which it hoped to leverage for a new concession. Six years later, it sold at a loss of US$150 million.

Caesars’ announcement came a day after Osaka formally endorsed MGM’s IR plans, but the choice was anticlimactic: the partnership of MGM and Orix were the sole bidders. They plan a US$10 billion complex with a casino, 2,500 hotel rooms, more than 700,000 square feet of conference and exhibition facilities and a variety of food and beverage offerings.

According to the materials, the consortium expects annual gaming sales of JPY430 billion (US$3.87 billion) and non-gaming sales of JPY110 billion, meaning total sales of JPY540 billion. The project is being referred to as “WOW next to the Kansai and Osaka region.”

The initial investment amount for the complex is confirmed at US$9.7 billion, with employment opportunities for 15,000 people. The consortium expects 20.5 million visits annually to the property: 14 million domestic-customer visits, and 6.5 million visits by international visitors.

Bill Hornbuckle, president and CEO of MGM Resorts, said in a statement, “We will work closely with the prefectural/city municipal governments to deliver an iconic, uniquely Japanese destination warranting Osaka’s selection as home to one of Japan’s first integrated resorts.”

Yokohama, Japan’s second largest city, withdrew from the bidding in August with the election of an anti-IR mayor, Takaharu Yamanaka. It’s been speculated that the country’s largest city—Tokyo, with a population of 14 million—could now step in as an IR candidate. According to the Nevada Independent, analysts have long viewed Tokyo as the prize. Gaming consultant Brendan Bussmann of Las Vegas-based Global Market Advisors suggested the Las Vegas companies as well as Genting Berhad, Malaysia-based owner of Resorts World Las Vegas, might also return to Japan.

“While (Japan) appears to be set at the current three locations, there are some scenarios that would allow for additional sites to be added either because not all three are selected or another site emerges before the April 2022 deadline,” Bussmann said.

Initially, most major operators planned to compete in Japan, drawn by estimates that Japanese casinos could bring in between $20 billion and $25 billion in annual gaming revenues per year at maturity, at the time second only to Macau. The Covid-19 pandemic sent many of those operators scurrying, though MGM remained steadfast.