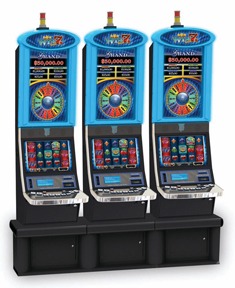 When David Baazov, chairman, president and CEO of the diversified Canadian supplier Amaya Gaming Group, was looking to acquire a slot manufacturer to complete its lineup of online, mobile and land-based casino products, he searched for a growing, innovative company with the ability to serve a broad range of customers.

He found that in Georgia-based Cadillac Jack, a company that had been a leader in Class II markets and in Mexico for years, but had most recently been making significant inroads into Class III markets.

“Cadillac Jack is instrumental in providing Amaya the capability of extending our offering to meet land-based operators,” Baazov told GGB in January. Baazov said Cadillac Jack, which Amaya acquired late last year, was appealing to its new parent company not only because it provided the company an accelerated path to entry into U.S. markets, but because of the company’s innovative slot content, which is expected to translate seamlessly to online and mobile channels.

This year, Cadillac Jack has continued to refine that content and build its product portfolio, leveraging its past successes and creating products for launch at this year’s G2E that promise to reinforce existing markets and open up new ones.

“Cadillac Jack set high goals this year in regards to our product,” comments John Milliner, senior product manager for Cadillac Jack. “I am pleased to report that we are on track and are exceeding our goals. In particular, we aim to maintain our leadership position in U.S. Class II and in the Mexico market, while leveraging that success to gain floor share and entry into new Class III casino markets.”

Milliner says Cadillac Jack continues to place a strong priority on research and development to round out its portfolio to serve both Class II and Class III this year, in an effort to further enhance the company’s slot products. “We have added to our game development and engineering teams with experienced industry leaders,” Milliner says. “We have an exceptional team in place with strong management who have taken our company to new levels, and you can clearly see this in the products we have slated for release.”

He adds that these efforts have paid off in game performance. “We have very strong performance from our new product series,” he says. “With the significant investment in R&D and game design in recent years, our latest games represent some of the highest-quality art and animation in the industry, as well as some of the most engaging, entertaining and rich bonus features anywhere.”

Cadillac Jack, in fact, has been on a roll. Products introduced last year such as “Peter & Wendy,” a video slot based on the classic play Peter Pan, and “Unicorn Fortunes,” which introduced the “Streaming Stacks” game feature, have been earning big for operators. This year, Milliner says the company’s game design team will build on the company’s growing core product portfolio while introducing a new cabinet, exciting game mechanics and new product series at G2E.

At this year’s G2E show, those products will be accompanied by a new cabinet. Dubbed “Stratos,” the cabinet features a 32-inch vertical portrait-style monitor—housed in an imposing eight-foot structure—as well as attention-grabbing, game-controlled LED lighting.

“It’s quite impressive to look at, and we have several products coming out that are designed around the Stratos cabinet, which we expect to do very well in the casino,” Milliner says.

The inaugural game on the Stratos cabinet is “Win With 7s,” a multi-level progressive video slot that will be part of both the successful Cadillac Cash Class II wide-area progressive network and the company’s Class III Multi-Level Progressive series.

The classic theme includes an interactive wheel bonus centered on the large vertical top screen, as well as a mixture of free spins, wild symbols, and the opportunity to win one of five levels of progressive jackpots.

The primary game also includes the popular Streaming Stacks feature. At the start of every spin, a symbol is randomly chosen to be stacked on each reel, which results in huge wins.

“The artwork on this game is classic,” comments Milliner. “It is a sharp-looking game, and mixed with the dynamic LEDs of the new Stratos cabinet, it really stands out.”

The Win With 7s theme, which will be highlighted at G2E, will be joined by more themes in the new cabinet in the coming months.

In the company’s core video-slot series, the prominent product at G2E will be “Dragon’s Lair,” which includes the type of multiple-bonus lineup that brought success to last year’s Peter & Wendy game.

Dragon’s Lair is based on the famous 1980s arcade game of the same name, and is released to coincide with the original skill-based game’s 30th anniversary. “We are excited to bring this iconic game to a new medium,” Milliner says. “Dragon’s Lair is going to draw a lot of attention from fans of the original arcade game, and because the theme and characters are so fun, we think it will also bring a new set of players to the game.”

The game employs high-quality 3D graphics, integrated between the top and bottom screens, to immerse players in the game. The multiple bonus events include two free-spin events and two pick bonuses. There are four levels of progressive jackpots, each tied to its own bonus round.

Don Bluth, the animator of the original Dragon’s Lair arcade game, provided new animation for the slot machine, which is combined with familiar animation from the original game.

The other showcase game in Cadillac Jack’s G2E lineup is “Power XStream,” which introduces a unique 3-4-4-4-3 reel lineup. It is a scatter-pay game—there are no paylines, and wins are based on symbols occurring on adjacent reels.

The first theme in the new Power XStream series, to be launched at the trade show, is “Legend of the White Buffalo,” designed with a nicely done Native American theme. A second theme, to be released later this year, is “Fire Wolf.”

The showcase games will be accompanied by new products in all game categories. “We have focused on leveraging our proven performers, while at the same time adding new and enticing math models,” Milliner says. “We are launching new product series, while at the same time beefing up our existing product portfolio by introducing new themes to some of our high-performing core series.”

In all, Cadillac Jack’s new game lineup promises to continue the momentum that first made the slot manufacturer attractive to its new parent company.

“With the proven product portfolio in place, and a wide variety of new games in the pipeline, Cadillac Jack is exceeding its goals,” says Milliner. “At this point we are in a very good place.”