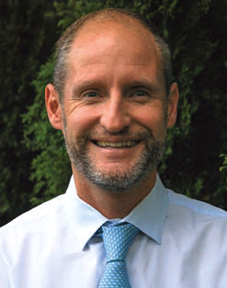 In June 2019, a historic event occurred in Boston, Massachusetts when the 671-room Encore Boston Harbor opened, making it the only casino resort in Boston. Not only was it a landmark moment for the city, but also one for Jeffrey Caldwell. As the executive director of hotel operations, the resort’s opening marked a career milestone for Caldwell, who takes great pride in helping bring the Wynn culture and experience from Las Vegas to the Northeast.

Originally, Caldwell studied finance while at Virginia Tech, but one summer he helped his father at a recreation club in Richmond, Virginia, where he discovered his love for hospitality. When Caldwell returned to campus, he switched to a hospitality major and started a new job at The Inn at Virginia Tech cleaning and refreshing conference rooms. After graduating, Caldwell recognized he had to move to something bigger to achieve his career goals. Caldwell ultimately decided the bright lights of Las Vegas were the best fit, and in hindsight, this move would be the decision that had the largest impact on his career.

Caldwell eventually landed at Hilton Grand Vacations, which served as a stepping stone to his preferred and current employer, Wynn Resorts. In Las Vegas, Caldwell learned how to run a consistent and high-quality operation with high levels of service. He notes that “keeping to your values leads to high-level hospitality professionals,” and with those values comes a successful hospitality operation. Furthermore, he learned how to identify and properly train the people who will thrive in a casino environment, a skill that would come in handy on his next endeavor.

Though his time in Las Vegas was fulfilling, Caldwell had an itch to move back East, and the transition to Encore Boston Harbor was a no-brainer. It ultimately led to his current position. Little did he know that his move to Boston would lead to him to discover that his passion lies in building something from the ground up. In fact, he looks forward to the possibility of doing this again if “Wynn opens new regional properties elsewhere.”

He takes pride in having input in every aspect of the rooms in the new resort, down to the look and feel of the pencils on the desk. Not only did he have input in the room design, but he also had a hand in hiring about 5,000 people “in a market that in many cases had never had some of our positions exist before,” Caldwell observes.

Taking the Las Vegas integrated resort model and adapting it to create “Boston’s Hometown Casino” was not always a smooth road. At first, Encore operated similarly to its Las Vegas sister properties. This included paid parking and lines at hotel check-in and the buffet. Identifying and quickly altering operations to fit the regional model better, including quicker turnaround times for hotel rooms among other changes, is what Caldwell attributes to the early successes of the property.

Guests stay for multiple nights in Las Vegas, giving them more time to experience what Wynn and Encore have to offer. However, in Boston, guests may come for a few hours or overnight. Giving guests the consistent experience that they expect from Wynn Resorts, no matter which property they are at, is what Caldwell strives to provide. With his leadership, personal values, and passion for building something from the foundation up, Jeffrey Caldwell has helped lead Encore Boston Harbor to a successful opening over the past 18 months.